Our early preview of the 2013 Michigan Wolverines football team resumes with a detailed look at the strong and weak side defensive ends. How much depth does this group offer, and is there anyone capable of stepping up into a star role?

Beyer has been a bit of a 'tweener during his time at Michigan, spending time at the SAM linebacker position during his freshman year before being moved to rush end. He's definitely a better fit at defensive end, where he can put muscle onto a body that just wasn't fast enough to play linebacker at the same level as Jake Ryan or Cam Gordon. He has above average athleticism for a weak side defensive end, but still needs to work on being consistent mentally: he has struggled to contain read and option plays before, and still has some work to do on his technique in general. He'll be in the thick of the WDE race that includes three players who are more athletic than he is. 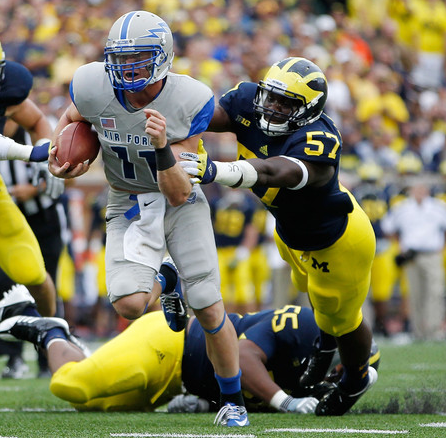 Clark has only played for two years at Michigan, yet it might not be unfair to label him as an enigma. He played sparingly throughout 2011, topping off the year with an incredible interception that helped Michigan top Virginia Tech in the Sugar Bowl. That one play sparked some off-season hype for Clark, who appeared to be the freakish weak side defensive end that Michigan had been lacking for so long.

This past year wasn't the year that Clark was expecting. He sat out of the Alabama contest after being charged with second-degree home invasion, and he played inconsistently throughout the rest of the year. He did end the regular season with a bang - quite literally - when he ran through Braxton Miller after coming into the backfield untouched. That play, coupled with his interception against Virginia Tech, defines Frank Clark so far: a player with great explosion who still needs to put it all together. He doesn't have the length to be a first-round NFL pick, but neither did Brandon Graham. He still has the potential to be a threat on passing downs, and possibly more if he starts taking his responsibilities more seriously. 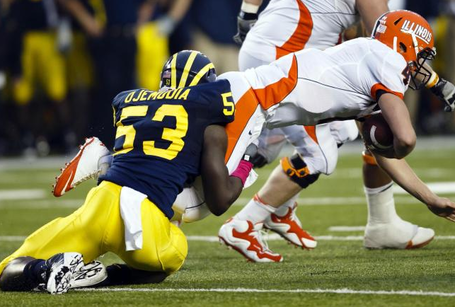 Ojemudia was a player that many picked as a sleeper coming out of the 2012 recruiting class. He played on the inside in high school, destroying good high school football programs ' offenses with solid technique and burst off of the line. He lacks the ideal height that someone like Charlton has, and he also needs to get stronger, but he was also miles ahead of Charlton in terms of awareness and technique as an incoming freshman. He needs to put on a decent amount of weight before he can legitimately contribute in run defense, but I expect his weight to be between 240 and 250 by the time fall comes around. He'll be a half-step behind Clark and Beyer in the hunt for the start spot, but in the hunt nonetheless.

Alright, let's do this again. Charlton has the potential to be an elite terror off of the edge. Key work: potential. He's a consensus four-star defensive end because of his freakish athletic ability for someone who's 6'6", 245: he showed up to Nike's Opening ready to jump over football dummies. He didn't come prepared for the one-on-on drills, where he showed his entire library of moves by speed rushing on every snap. No bull rush ability, poor hand use, and a bad pad level lead to him being thrown to the ground more than once. He did make a few elite offensive tackles look pedestrian by beating them off of the ball, but don't encourage it.

Charlton has everything you look for in a weak side defensive end: length, elite burst and a frame that can easily hold twenty more pounds of muscle without depleting his speed. He's still just a block of clay for now, but if Mattison and the staff can teach him to play with consistent technique he'll play on Sundays. He's already on campus adjusting to classes and weight training, and I expect him to make strides after spring and fall practices. If he just adds one more move in that time he'll be the best pass rusher that Michigan has, and boy do they need that. 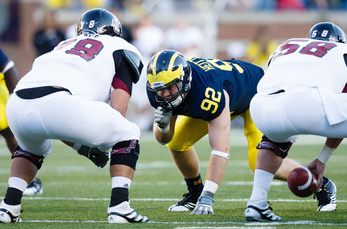 Heitzman received the lowest high school ratings of any five-tech currently on Michigan's roster, but he came onto the scene last year as Craig Roh's backup. He lacks the length that the three freshman have, and he isn't considered explosive either. He improved enough throughout 2012 to earn more minutes toward the end of the year, performing somewhat consistently whenever he had a chance to come into the game. I don't consider him a favorite to take over the strong side spot, as he just doesn't have the same ceiling as the other three players he'll be competing against. He's a short-term starter at best and a decent rotation player at worst, but the team needs guys like Heitzman who provide depth.

Godin is one of two strong side defensive ends on the roster capable of moving inside to the three-technique, although recruiting services like Scout specifically said that Godin is a better fit for the five-tech spot. Godin came in as a player who still needed to develop the strength needed to defeat offensive tackles. He was more of a technician than many high school defensive lineman and possessed above average agility. He has a thicker frame than Strobel and should be stronger throughout his career, but he doesn't have the athleticism that Strobel or Wormley have. I think he'll turn into a technician who gives Michigan solid minutes in the rotation.

I actually ran into Tom on campus just before the fall semester began, and he told me that the coaching staff had him at "rush" end, which means weak side defensive end. I assume they only pegged him as a weak side player because of his lack of weight, but that issue should be at least partially resolved by the time fall practice comes around. He was actually rated higher than Wormley by Rivals, and showed enough overall talent to be ranked as a four-star prospect by the other scouting services as well. He might be the best bet of any strong side defensive end to make a tackle in the open field, but he lacks the strength that Wormley and Godin have. He'll be in the thick of the race for the starting five-technique spot once he gets his weight into the 270-pound range.

Christopher's freshman year was a massive disappointment, as he was forced to redshirt because of a tear in one of his knees. He was pegged as a likely freshman contributor before the injury because of his combination of size, athleticism and strength. Rivals rated him as a three-star recruit, but don't let the rating fool you: Ohio State wanted Wormley badly despite being heavily involved in the recruitment of multiple five-star defensive ends.

Whether or not Wormley will make an impact this year is yet to be decided, but if there is anyone capable of coming off of a knee injury and dominating, it's him. He already has the size and length to deal with tackles at the college level, and he was easily the most explosive strong side defensive end that Michigan had on its roster before the injury.

Young, talented yet not elite, and in need of more experience. Need I say more?

I'll say more. There are plenty of people on the interwebs who believe that Wormley is pegged for defensive tackle, but I'm not buying it. He's long and moves better than most men his size, but I still don't see him banging bodies in the middle of the line. Wormley belongs at the five-tech, and I think he comes off of the knee injury ready to steal the starting spot by the end of the 2013 season. Heitzman and Godin will push him, and Strobel could as well if he's not playing on the weak side. The strong side will be great for years to come if Wormley stays there and one of Strobel or Godin steps up, but it will need more help if Wormley does in fact end up moving inside.

The weak side spot looks like a race between Beyer and Clark, with Ojemudia not too far behind them. I'll take Clark because of his explosiveness and Michigan's lack thereof, but don't be surprised if Beyer or Ojemudia step in. Meanwhile, Charlton comes in on third downs and is second to only Jake Ryan in sacks. The overall run-stopping ability of the weak side group improves slightly from 2012, but we're left wanting more heading into 2014.