MRR updates you on the very latest Michigan football recruiting rumblings. What exactly is Michael Ferns' project? Will this upcoming weekend live up to its hype? That and more.

Share All sharing options for: Monday Recruiting Roundup Does Business

Last year Shane Morris worked Twitter and iMessage like no one else, helping Michigan land one of the best classes in the country. This year the lynchpin of Michigan's recruiting efforts is Michael Ferns, and he has a business plan in mind:

Michael Ferns III hasn't been bashful when it comes to texting and tweeting prospective teammates, but he had long thought about how he could make his pitch more effective. From that his dad Michael Ferns Jr. came up with idea of developing a T-shirt. From that they together thought up "Project 135."

The T-shirt, which reads "Building a Class One Member at a Time," serves both as a culmination and perpetuation of Ferns' recruiting efforts. When a prospect commits to Michigan, Ferns will mail him a shirt. Then when that Michigan commit wears his shirt around to various events the "Team 135" seed will potentially be planted in other prospective targets. It's a concept that could just as easily be applicable as a marketing strategy for a major company. Ferns' goal, though, is much more modest. He isn't looking to acquire wealth. He's looking to acquire teammates.

"I got into the mindset that if I get into recruiting others, I have a chance to help get the kind of people that I want around me for four years," Ferns explained. "It was a little weird at first. I never had someone my age there to talk to me about the whole (recruiting process), so I never knew how to really approach it. But over time you start to see that everyone is kind of in the same situation... especially Michigan recruits. They all strive for the same things academically and athletically."

I like the concept, and I'm interested to see if other recruits will be interested in it. Shane was so successful on the recruiting trail because he could connect with all sorts of recruits, thanks to his "hey bro how are you doing bro" type of personality. Ferns seems more reserved and more likely to steer a recruit toward Michigan purely for academics, so it will be intriguing to see if he has the same amount of success that Morris had.

Four-star offensive lineman Mason Cole has taken notice, and he might be the next one wearing the shirt:

Cole is one of several players visiting this upcoming weekend for the basketball game against Illinois. I don't expect him to pull the trigger on the trip, but the more time he spends with Ferns the better: we saw how much of an impact relationships like this had on David Dawson, Derrick Green, Henry Poggi and others in the last class.

And in case you're wondering, here's the shirt: 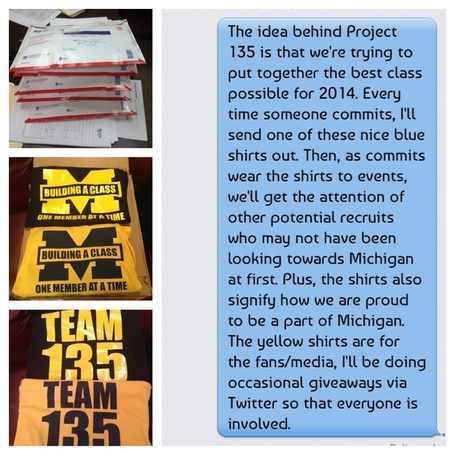 Corny? Maybe a little bit, but you can't help but respect the kid's enthusiasm for Michigan.

Two names to keep an eye on:

Smith is capable of playing both safety and receiver at the next level, and the staff is recruiting him as a safety for now. His odd running motion makes me think of Michael Floyd, who also ran with his arms swinging like pendulums. His defensive ball skills are clearly solid, although the lack of tackles on the tape concerns me. Still, Michigan has secured enough tackling safeties to take a chance on an interception machine. Smith really likes Michigan and their efforts to get him to come visit.

Crawford is very high on Michigan, so much that some don't believe that the Wolverines are a solid favorite for him. These extremely early leads often disappear when a recruit blows up on the national scene, and it looks like Crawford will hold offers from all of the national powerhouses when his year rolls around. He's already faster, quicker and more sound on the football field than many of the skill players in the class above him. Some think he'll end up being a corner, but based on his tape it looks like he was born to have the ball in his hands. Oh, and fun fact: he's young enough to be a 2016 prospect, which means that he's just now scratching the surface of his talent.

The Core 6 Showcase was just held in Cincinnati, and a few big names on Michigan's radar made an impact: Malik McDowell took home the lineman MVP, Dominique Booth took offensive MVP, Clifton Garret took the defensive MVP, and Jamarco Jones won the overall MVP. Michigan has offered McDowell and Jones and is pursuing Booth and Garrett as well.

Glenn Robinson's younger brother Gelen Robinson impresses me more and more as time goes on. The 2014 OLB/DE recently won the Indiana 220-pound wrestling title, and if you know anything about wrestling you know that it translates directly to football. Remember Mike Martin? Of course you do. He was one of the most dominant wrestlers in the state of Michigan during his high school days, and he went on to be a technician on the defensive line because he understood leverage and hand positioning better than all of his competition. If Robinson can show well in camps he may be due up for an offer from Michigan.

Our very own DGDestroys breaks down Bryan Mone's game even further than I did in the Friday roundup. A snippet of what he had to say:

Every year, there's a top tier of DTs with the explosiveness that could make them...well to make it easy on Lions fans...someone like Nick Fairly or Ndamukong Suh. You saw that in the 2013 class with guys like Eddie Vanderdoes, Montravius Adams, and A'Shawn Robinson. Michigan's even offered a couple of those guys in the 2014 class in Dexter Wideman and Khairi Clark.

Mone belongs right below that top tier. He doesn't have the same ceiling as those players, which is why I think some of the Haloti Ngata comparisons are a stretch. However, that doesn't preclude him from becoming a top-notch collegiate player. He uses his hands better than most collegiate prospects, shows great flexibility when pass rushing, and understands leverage. It's actually a bit strange- he comes from such a lowly touted area, that you wouldn't expect him to be nearly this refined.

Read the rest of the New Blue piece for much more analysis.

Rivals breaks down Michigan's focus on the state of Ohio. The Wolverines and Buckeyes won't offer a player just for the sake of fighting over him:

Although Ohio State head man, and time-tested recruiting aficionado, Urban Meyer will provide great opposition along the recruiting trail, Hoke and Co. appear up for the challenge, and are extremely pleased both with their 2013 haul and prospective future in the Midwest.

"I don't know if I would call it a battle," said linebackers coach Mark Smith on posturing for the same prospects as OSU's coaching staff. "They will make their decisions and we will make our decisions. If it happens to be on the same kid we'll sell what we have and they'll sell what they have, and the kid will decide.

"You look at [2013 linebacker] Mike McCray, for every intent and purpose he should have gone to Ohio State. His dad was a captain at Ohio State, but like his father said, 'What's right for me isn't right for Mike.'"

But, but, but, Ohio State never wanted Mike McCray!

Class of 2013 commitments Derrick Green, Khalid Hill and David Dawson were all in Ann Arbor for Michigan's basketball contest against Penn State yesterday. Green said that he would be visiting Michigan once a month until he's on campus, and he's living up to his word. If only he and Dawson could have enrolled early.

Cornerback prospect Parrker Westphal and his family were in town for the basketball game as well. I swear he's been on campus more than any other player in the 2014 class; I wouldn't be surprised if he's the next name to drop in favor of Michigan.