MnB continues its way too early look at the 2013 Michigan football roster by taking a look at the wide receivers. Can anyone break out and help a group that lacks experience?

Share All sharing options for: 2013 Roster Breakdown: The Receivers

Oh, the receivers. Michigan has been a machine at producing NFL-caliber receivers in years past, putting out Jason Avant, Braylon Edwards, Adrian Arrington, Steve Breaston, Mario Manningham and many others before them. That trend has since disappeared, as both the new and former staffs couldn't close the deal on a handful of elite prospects. This past year was another sub-par year for the receiving core, although some of it could be attributed to the inconsistent quarterback play. The group loses senior leader Roy Roundtree to graduation, and it needs someone to step up fast. 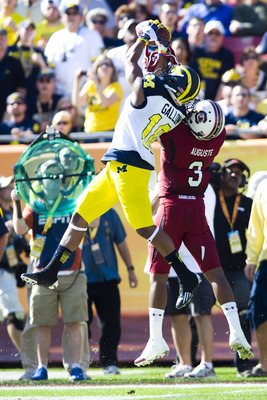 Gallon was a four-star athlete coming out of high school, and he seemed to be the next star slot in Rich Rodriguez's flashy new spread offense. His tool set was that of your prototypical spread slot: short, extremely quick and lacking elite long speed. He redshirted his first year on campus, following it with a year in which he displayed mostly shaky return ability. He broke out early in his redshirt sophomore year, recording a touchdown and a key reception to set up one of the most thrilling victories over Notre Dame of all time. His returns also improved and he showed the ability to beat corners from the slot, flashing a solid pair of hands in the meantime. This past year was much different, as Gallon moved back and forth from the slot to the outside out of pure necessity. He showed some previously unseen jump ball ability, and also became a sure bet to be targeted on curls and slants off of play action. 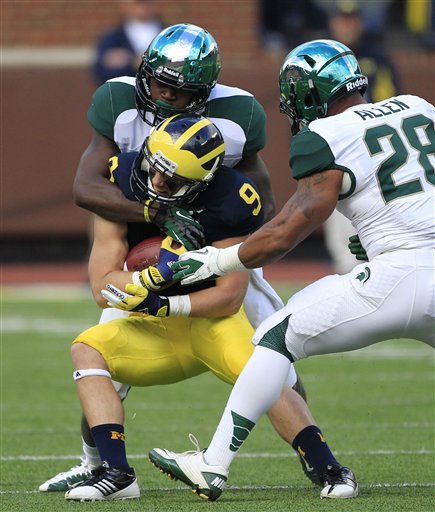 Dileo is another Rich Rodriguez slot recruit who wouldn't be on the roster if Hoke had been here before. He was a low three-star recruit in high school because of his lack of elite physical tools: many described him with cliches like "he just knows how to win games" and "he's a true football player". Those cliches actually turned out to be true, as Dileo has gone on to contribute in unexpected ways, doing everything from holding snaps on field goals, running fake field goal sweeps and becoming one of Denard Robinson's favorite targets in big games. He still isn't crazy quick or tall by anyone's standards, but he knows how to find holes in zones and catches the ball when it gets to him. We can't really ask for much more from this southern slot.

Michigan needed multiple wide receivers in the class of 2013, but no one expected the Wolverines to reach on a recruit who was ranked as low as Jones was. He was committed to Central Michigan until Michigan came knocking, immediately switching his verbal to the Wolverines when they offered. At first glance he looked average, but a closer look at his tape revealed a player who just might be the most talented receiver in Michigan's previous two recruiting classes. Jones is probably the second-fastest receiver on the roster behind Jehu Chesson, and I think he's the best combination of size, speed and ball skills. He's capable of playing outside and inside, but he's most likely destined for a more traditional pro-style slot role in Michigan's future offense. Don't look too much into his rankings; it's rumored that Alabama, UCLA and others visited him in the days leading up to signing day. 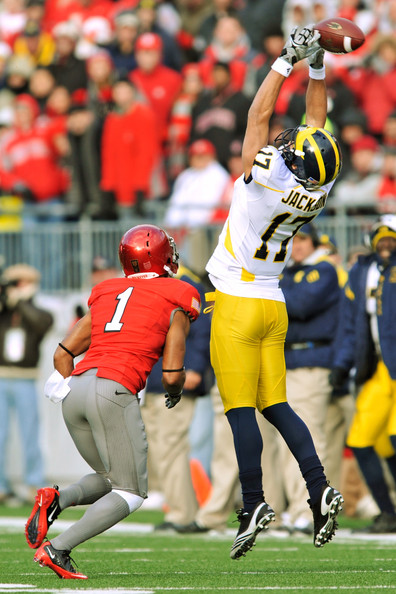 Jackson is the son of current quote machine and running backs coach Fred Jackson. He hasn't done much at all during his time in Ann Arbor, occasionally coming in to block on run plays or be overthrown on post routes. He doesn't offer much outside of his ability to block in the run game; he's relatively slow and doesn't show the ability to be a great possession receiver. If he plays major minutes this year he either made some strides or is needed because the receiving core is that bad: I don't see the latter happening.

Darboh is one of the most inspirational recruits Michigan has landed in recent years, going from Sierra Leone war orphan to Michigan receiver in a matter of years. He was a four-star receiver to many scouting services, showing above average speed, solid strength and the ability to go up and get the ball. He didn't redshirt this past year, playing sparingly on special teams and even less at wide receiver. He brought some excitement to the team's bowl practices when he made a ridiculous one-handed sideline catch, causing many to tag him as a future breakout player based on one practice play. He has a B+ ceiling and shouldn't be overlooked, but I think there is a group of Michigan fans who need to check their expectations for Darboh.

Chesson was a high three-star recruit coming out of high school, although he looked like a five-star athlete on his high school's track team: he won Missouri state titles in the 100-meter dash, and in the 300-meter and 110-meter hurdles. He didn't have football strength, weighing in below 180 pounds and looking like a string bean. He's now above the 180-pound mark and should be closer to 190 pounds by the time fall practice comes around, giving him just enough muscle to survive the devastating blows he might take on the field. His lack of weight means that his track speed won't fully translate to football; I still expect him to have enough football speed to beat corners and safeties on long developing routes. He also flashes solid quickness for someone who's 6'2", and can go up and get jump balls with his explosiveness as well. His ceiling is high, as is the chance that he never pans out.

Dukes' game represents everything this staff apparently wants in a receiver. He has big, soft hands, great jump-ball ability, an extremely long frame and just enough speed to play at the next level. Dukes won't ever be Braylon Edwards; he just doesn't have the speed to take the top off of a defense. He's still a capable prospect who could play as a freshman because of his size and ability to out-muscle corners. Dukes is unlike many of the receivers on the roster because he has an above average ceiling that he's already close to reaching.

Shave a tenth of a second off of Dukes' forty time and take away an inch or two of height, and you're looking at Csont'e York. Csont'e has a bit more slashing ability than Dukes, but both have great hands and body control that allows them to go up and secure catches in awkward situations. Both were rated as three-star receivers because they lack burst, although I think York could add muscle to his core and lower body and become a half-step faster; York's ceiling might be a touch higher because of that one small detail.

The receiver position is one of the few spots on the roster that hasn't been addressed at an elite level by the staff on the recruiting trail. There's still some promise here, with Gallon and Dileo manning the slot while a host of youngsters battle it out for playing minutes on the outside. Gallon is a proven commodity and Dileo has shown the ability to be a consistent possession slot, so if one player can separate himself from the pack in the race for the outside this group could outdo last year's by a decent margin.

Who steps up? I've got my money on one of Darboh or Dukes, with Jones, Chesson and York being strong possibilities as well. Darboh does seem like a player who could come out and give the team a Hemingway-like presence, and Dukes is a freshman who has the physical tools and confidence to come in and contribute from day one.

I'm expecting Gallon to move around from one outside position to the slot much like he did in this past season, with one of Darboh or Dukes starting opposite him. Three, four and five receiver sets could get interesting, as tight ends and multiple slots could be sprinkled in across the formation to make up for a lack of talent and experience at the outside spot; this is where I think Da'Mario Jones could have a huge impact. Gallon leads the team in receptions by a fairly wide margin, but Dukes takes the cake in touchdown receptions.