MnB continues its way too early look at the 2013 Michigan football roster by taking a look at the strong side linebackers. Has Jake Ryan already reached his potential, and is there another future star behind him? 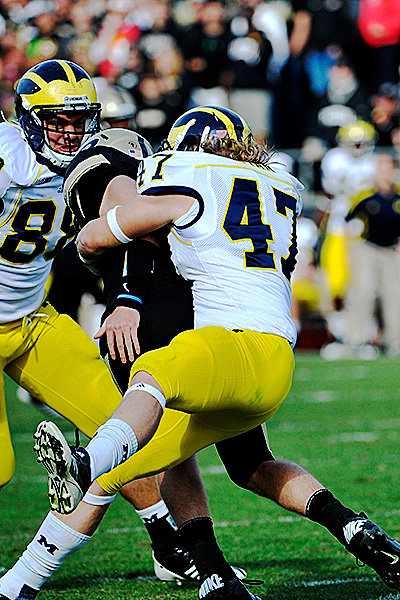 Jake Ryan came into Michigan as a middling three-star recruit. He played beside Buckeye Scott McVey, who many believed would go on to outshine Ryan at the next level. McVey has since been given a medical hardship scholarship, and Ryan has been doing his best to prove that his three-star rating was anything but accurate. He redshirted his freshman year, watching as one of the worst Michigan defenses of all time gave up a horrific amount of yardage. Greg Mattison then came to town, and Ryan has made progress every week since. He battled for the starting SAM spot in 2011 and probably would have sat had it not been for the bad back of one Cam Gordon. That back injury now looks like a blessing in disguise for the Michigan program, as Ryan has grown from a scrawny linebacker to a do-it-all terror on the edge. This past season's state line for Ryan is more than solid: 88 tackles (56 solo), 16 tackles for loss, 4.5 sacks, 3 pass break ups, 2 quarterback hurries, 4 forces fumbles and one fumble recovery. To say that he did it all for the Wolverines would be an understatement.

Some now wonder if Jake Ryan is done growing as a football player. I say no: Ryan will show up this season even stronger and probably a touch leaner, and even though he had a hell of a season, he still made some mistakes. He can become a more consistent open-field tackler, and a football player's pass rush can always improve by adding more techniques. Ryan is at the point in his career where he knows the system and understands leverage, so the next step is polishing him game up that much more. 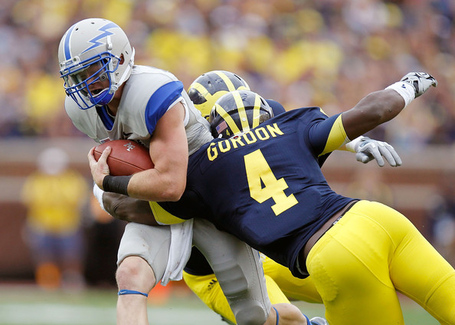 The one man in the Michigan football program who wouldn't call Cameron Gordon's back injury a blessing in disguise is Cameron Gordon himself. Gordon had an impressive spring in 2011 and was primed to take the SAM position with force, but his back cost him that opportunity; he now sits behind an established star and wishes he would have stayed at wide receiver, where no stars can be found.

Gordon's early career was interesting to say the least. He came into Michigan as a low four-star recruit who many saw fit to play receiver, although some quietly admitted that he become a thumper at linebacker. Rich Rodriguez's intelligent defensive staff stuck him at safety and hyped him up with one spring quote after another, but the hyped was quickly killed off when he was badly exposed against Notre Dame. He had his moments throughout the year, intercepting a few passes and making the occasional big hit, but overall it looked like Gordon didn't have the deep speed to play safety. Two years later we're talking about how he was this close to stepping into a starting strong side linebacker spot, and if it weren't for his back we might be talking about Gordon being a solid starter. 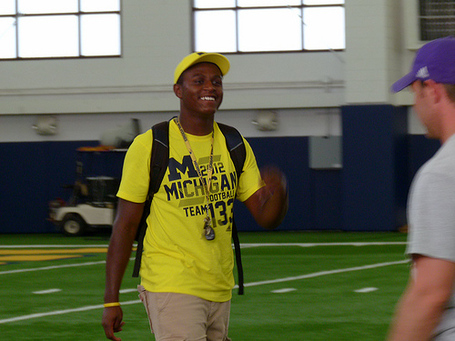 Mike McCray is one of the many four-star linebackers the staff has hauled in during these past two recruiting cycles, and he looks like the only one suited to play the SAM position: no one else has the length to play on the edge. He's also the focus of many naive "Urban Meyer didn't really want him" comments from those people down south.

McCray has more than just length, flashing great instincts and consistent pad level on tape, not to mention great coverage skills for a young linebacker his size. He also has athleticism that's a touch below elite, which should help him in setting and containing the edge at the SAM spot. He could be a future star at the MIKE or the SAM, but moving inside seems unlikely given Michigan's current situation on the edge.

This is the strongest group on Michigan's roster, hands down. There are only three players who can truly fit the position, but the group still ranges from talented and experienced to talented and inexperienced. Jake Ryan is Jake Ryan: plug him in and let him take care of anything that comes to the outside. Cameron Gordon would probably be one of the better strong side linebackers in the conference if he were to start, and Mike McCray was one of the most sought-after outside linebackers in his class. Talent isn't a problem here.

Neither is stopping the run. Jake Ryan has become a consistent defender of the run after putting on mass and learning to use leverage to keep defenders at bay. None of that will change, but I think the fact that he's so strong in the run game will give him and the coaching staff more time to work on his pass rushing, which can still improve despite already being solid.

What kind of numbers should we expect from him? I see Ryan's total tackles rising by a small amount, while his sack numbers climb from 4.5 to around 10. He's the only pass-rushing threat on the roster as of now. Cameron Gordon won't see much time unless there's an injury to Ryan, and Mike McCray will hopefully get a year to get stronger and learn from two SAM Yodas.

There's also the question of whether or not Jake Ryan will leave for the NFL after this year, but I couldn't possibly give you a legitimate guess after watching a sure first round pick put off the paychecks for another year in Ann Arbor. I do know that Ryan could easily have his degree finished and should project to the third round or better, making him a strong candidate for early departure. I can see him coming back if Devin Gardner gets his medical redshirt and the team looks like a contender in 2014.