MRR updates you on the very latest Michigan football recruiting rumblings. Who was recently offered? A huge group of visitors were in this weekend, but did anything come of it? That and more.

A weekend that had everyone on commitment watch produced a whole lot of nothing, but it wasn't a complete failure by any stretch of the imagination: elite players like Elijah Hood, George Campbell, Mason Cole, Drake Harris and others all made it in and had great visits. Hood is a five-star lock, and he'll have a new leader soon:

"I have to wait and think about it, but there will be some movement on that list. Both Michigan and Ohio State will move up," he said. "One of these three schools will be my leader, but I have to talk with my family first. I'd like to get the new top five out as soon as possible."

Hood's weekend started with a visit to Notre Dame, where head coach Brian Kelly gave him a personal tour and spent some alone time speaking with the Watch List running back. He said he now understands what Notre Dame has to offer and what he would get out of the university if he were to go there -- something he called special.

Notre Dame was special, and Michigan was eye opening:

I loved Michigan that was #eyeopening

He didn't tweet anything nice about Ohio State, so take that, Buckeyes.

Mason Cole had a great time:

Really enjoyed my time in AA! I love #WolverineNation #GoBlue

He didn't pull the trigger despite many expecting him to. Michigan looks like the clear leader for his services at the moment.

Finally, Wilton Speight and Michael Ferns did their best to get Drake Harris to switch from the green and white: 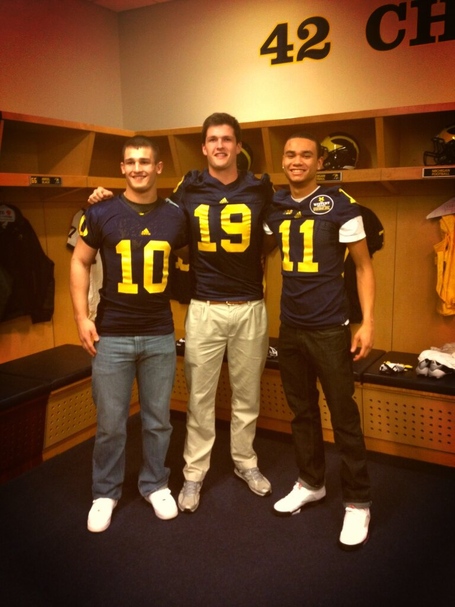 He didn't make the switch, but Michigan definitely helped itself. He's in touch with Mason Cole, who should add more pressure if he ever decides to go blue.

Overall, the weekend didn't produce a wave of commitments, but it did solidify Michigan in the top group for a handful of players. Harris, Cole, Campbell, Hood and more of the recruits who visited are all expected to make a return trip at some point in time.

Reactions from the Twitterverse:

Coach Mattison has already been in contact with Da'Shawn Hand's coaches. Not expecting Montgomery situation to affect his recruitment much.

Receiver Artavis Scott was the one who sent out the last tweet, showing that Montgomery had a way with more than just defensive lineman.

Williams is a receiver with solid size and elite ball skills, but he lacks the lite long speed that I've mentioned so many times before. He's a slight downgrade from someone like Drake Harris.

Wheatley is a legacy recruit, being the son of former Wolverine great Tyrone Wheatley. His height and weight impress right off the bat, especially for a high school sophomore. He blocks well as a tight end and catches the ball cleanly, so it wouldn't surprise me if Michigan decided to recruit him on the offensive side of the ball instead of as a defensive end. His frame could easily hold thirty more pounds of muscle, so the possibility of him becoming a nightmare at defensive end is there.

Some corners show more awareness on tape than others, and Roberts is one of those corners: he's around the ball all time time, intercepting passes and causing fumbles in many games. He has fluid hips, quick feet and enough long speed to be a threat to score on every turnover he creates. His height is a bit of a concern, but his explosiveness makes up for it. Offers from multiple southern powers will make it hard for Michigan to snag him, but the staff seems determined to offer and recruit kids in and around Louisiana this year.

Cole's highlights aren't anything otherworldly, but he does display division one speed and quickness as a sophomore in high school. He plays for a school that is a ten minute drive away from my childhood home in Saginaw, so I can personally attest to his competition being below average. Still, the coaching staff liked his tape enough to send out an offer.

Up-and-coming 2014 receiver Maurice Ways has been offered by Iowa. This is his best offer to date, and more should be on the way.

ESPN videos galore! The network takes a loot at the top offensive position classes in the class of 2013:

Video of 2015 athlete George Campbell at the UA Combine: