MRR updates you on the very latest Michigan football recruiting rumblings. Who did Michigan offer, and who could be the next Wolverine commitment?

Detroit cornerback Jalen Embry had a great view of a terrible loss: 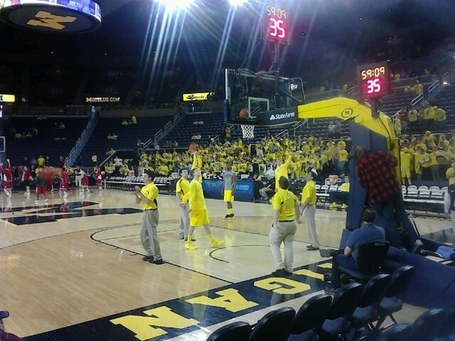 He met with the coaching staff prior to the game; I wouldn't be surprised if an offer is coming soon.

Star receiver Drake Harris was at the game as well, but he still found time to check out Michigan Stadium: 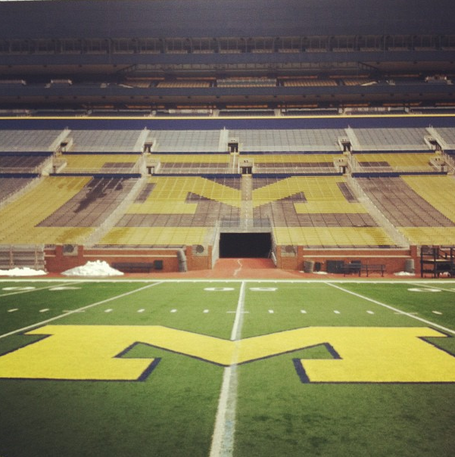 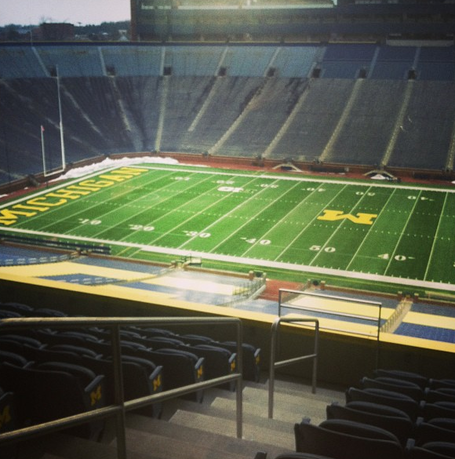 He seemed to be impressed by the luxury seating in the stadium. He was in Ann Arbor for the third week in a row.

UPDATE: Harris has decomitted from Michigan State, which comes as a surprise to no one. Don't expect a commitment from Harris just yet, as he holds offers from powers across the country and will certainly look around.

Michigan sits at four commitments and might not be too far away from its fifth. Who could the fifth be? My guesses, from most likely to least likely:

1: OL Tommy Doles - Doles is a good but not great offensive guard prospect. His best offer as of now comes from Michigan, and there's a good chance that he doesn't receive any more high-major offers worth turning down Michigan for. I wouldn't be surprised if he dropped by the end of March.

2: CB Jalen Embry - Embry still doesn't hold a Michigan offer, but I get the feeling that he really wants one. The staff has been giving him more and more attention, and they could receive an immediate commitment if they come through with an offer soon.

3: CB Parrker Westphal - Parrker holds an offer and has visited Ann Arbor more than enough times to warrant a commitment. Some might argue that he should be above Embry here because he actually holds an offer, but I disagree: Westphal will receive more attention from schools capable of wooing him away from Michigan than Embry will.

Other names to keep an eye on: WR Drake Harris, DE Lawrence Marshall, OL Alex Bars, LB Kyle Berger. I don't think any of these four players drop soon, but Michigan is either solidly in their top group or moving up for all of them.

Michigan has offered 2015 6'5", 235-pound tight end Devonaire Clarington. He already has verbals offers from Alabama, Florida State, Miami (FL) and others; this is no surprise considering his huge frame.

Scout previewed the SoCal Nike camp that kicked off yesterday. They touched on the abilities of Wilton Speight, who made his way to California despite being from the opposite side of the country:

Making the road trip from the Midwest is Michigan commit Wilton Speight. The Richmond (Va.) Collegiate School product is a big, strong quarterback with a powerful arm and he can make every throw on the field. He's very solid mechanically, has made huge strides in the last year and has a very big upside to him.

Scout also previewed the defensive side of the ball, which includes five-star cornerback and Michigan offeree Adoree Jackson. I would have liked it if Michigan commitment Bryan Mone would have made it out to California, but I'm sure he'll be at other camps. These events are great because we can learn more about the players while they learn more about the game from their positional coaches.

Steve Lorenz of 247 Sports put together a list of visitors for the Indiana game. I know the game already happened, but there is good deal of pertinent information in the article regarding each specific recruit.

Maybe help us out with some commas next time, Jermaine. His offer sheet is impressive despite his below average height.