Triumph and tragedy in the regular season

This isn't a time for grousing, but appreciation.

Share All sharing options for: Triumph and tragedy in the regular season

(First, let me give a quick shoutout and thanks to the rest of the gang for holding things down around here while I was on vacation last week. Great to know things are in good hands here while I'm away. The bad news? I'm back, and you're stuck with me.)

I didn't realize it until a week ago. I've never been the kind of person that does much, if any, advanced planning for anything that I do in life, so when I do end up committing to something months in advance, that event and the subsequent arrangement of its particulars exist in a vacuum for me, never becoming real impediments to anything else I have going on until the very last minute when something big is days away and the realization comes that this big thing will have an even bigger impact on the otherwise taken for granted parts of my life. So it was that looking over Michigan's last week or so of regular season basketball I realized that I would be either A) in a Dominican airport or worse yet B) on a plane above the Atlantic for the entirity of Michigan's biggest game of the season. Once I looked up the game time I realized that the latter would be the case, and that any hope of following Michigan that day would be pinned to a spotty and probably not free wifi connection on the flight.

Needless to say, the airport had no wifi, and what the plane had didn't work until nearly 7pm -- well after the game had ended. Instead, I sat and read a book* while playing soul music just loud enough with my noise cancelling headphones to drown out what little background noise made it through. While I have warmed to flying a bit as I've gotten a bit more experience doing it -- I didn't take my first flight until after college, and this is just the fourth trip that has involved air travel for me -- I'm still too much of a worrier to not let my imagination run wild at every clink, clunk, or buzz that must surely be a sign of impending doom (but never is).

So I distracted myself from the game while simultaneously trying to forget about the seat I was in -- the one attached to an airplane that was hurtling above the ocean. The game was just a game. Something I knew was out of reach for me.

It wasn't out of reach for Michigan. At least not until it was, and even then the margin was best measured in millimeters. 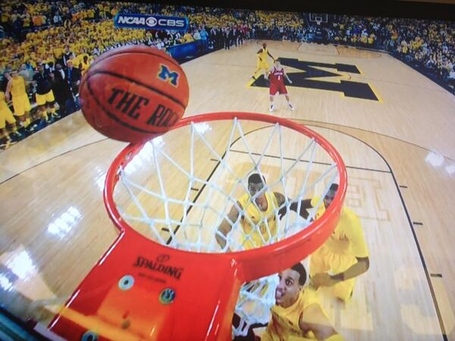 I still haven't watched the game, or even any highlights. I know the score, and I pretty much knew it when I finally got enough of a wifi connection on the plane to check the only thing that would load: facebook. All it took were three vaguely basketball related comments (one was simply "ugh", the second espoused the importance of late free throws, and the third was an MSU fan trolling) and I had a pretty strong picture in my head of how things went down. A text message exchange with a friend when the plane touched down, and a cursory glance at the Yahoo recap filled in the blanks.

But this isn't an essay about following sports in the 21st century. This is about Michigan's season, one of its best -- that counted -- in the last quarter of a century, and how none of that seems to matter.

While I was able to successfully avoid the game, I was not so lucky when it came to the hand-wringing over Michigan's failure to capitalize on this final chance at a conference title, and the rest of the season's failures and disappointments. Michigan collapsed in the final minute of its most important game of the season. The Wolverines missed free throws and couldn't stop Indiana's quick burst back into the lead. Nevermind that Indiana has be capable of these kinds of runs all season, Michigan still didn't close out when it mattered most.

I don't think this game is an indictment of a team that isn't tough enough or doesn't possess enough heart, nor do I believe that we have found John Beilein's ceiling as a coach (which you wouldn't believe the amount of mentions of that I've seen from commenters here and there). Michigan had a very good team with a few noticeable weaknesses, and at the end of the season, those weaknesses were exposed a few too many times. You know who else that happened to? Everyone. Consider:

- Indiana lost to Wisconsin at home, to Illinois because of a buzzer beater, to Minnesota while having a chance to lock up the conference race, and to Ohio State in a lopsided loss with another shot at the title on the line.

- Michigan State lost three games in a row over the last two weeks of the season when a win in any one would have gotten the Spartans a share of the title, and wins in two would put them in pole position down the stretch.

- Wisconsin needed a buzzer beater against Michigan to force overtime, and another against Penn State to avoid it. The Badgers still lost to Iowa, Minnesota, and Purdue.

- Ohio State lost by double digits to Wisconsin, Indiana, and Illinois while falling to Michigan in overtime.

Such is life in the toughest conference in basketball this year, and while Michigan has the black eye of a 20+ point loss in East Lansing, an 0-2 against Indiana, and a horrible loss to Penn State, Michigan also managed to find a way to win a few games. You can look back on the season and point out the pivotal moments; the moments that could have had Michigan playing for an outright title on Sunday, or even already locked into a share of it regardless of the outcome. But that isn't the way things really work, at least most of the time. Brian at MGoBlog summed it up best:

My most recent basketball memory is brooding over a narrow loss. Also there are a couple additional narrow-loss broodings in there ranging from 10th to 4th most recent. I don't know, man. Michigan probably wouldn't have grabbed that share of the Big Ten title if the conference season was 1800 games long. If Morgan's tip goes down their collective margin of victory over the teams they hypothetically would have shared with would have been 4; their collective margin of loss was 34. They were 3-3 in conference games decided by five or fewer points. They lost to Penn State. In the end, they got a fair result.

Michigan was a halfcourt shot against Wisconsin and a few minutes of getting its act together against the worst team in conference from being guaranteed a share of the title on Sunday. The Wolverines were also fortunate to escape with home wins against MSU, OSU, and Penn State, as well as a close road win against Purdue a week ago.

The dream season you have in your head almost never comes to fruition. Teams are rarely ever perfect, and even when they are usually there is an off night in which a game falls just out of reach. College basketball is too huge and chaotic to navigate unblemished. Add in the fact that the Big Ten was a gauntlet this year where Michigan had to play six games against teams that finished in the top ten and you end up with a really damn good season in spite of the end results of Sunday. Trey Burke just walked away with Big Ten player of the year honors, will probably make a strong push for national player of the year, and the Wolverines played in some of the most ridiculously competitive games I can remember from my entire time as a fan.

And all of it happened while depending heavily on the starting five, as well as a freshman class that hasn't even seen spring in Ann Arbor for the first time. Michigan dealt with injury and inconsistency at the five, and at more than a few points during the season, Trey Burke had to almost literally carry the rest of the team on his back -- something that still worked more often than not.

This wasn't your dream season, but it was a dream nonetheless. The way these next two single-elimination tournaments play out will have a big effect on just how much of a success most of us deem this season, but in a way that's too bad. This team has already done more in one season that past incarnations had done in over two decades, and yours and my preseason expectations can go to hell.

No redemption is needed. This isn't your dream. It's their's. Let them finish it, and enjoy the ride.

*(Both Flesh and Not - David Foster Wallace; not quite as consistently strong as Consider the Lobster or capable of the same heights of A Supposedly Fun Thing..., but an entertaining read nonetheless.)

**(Even Florida, Kansas, and Duke have big upsets or lopsided losses on their resume. It's been a weird year.)