Michigan took on the Wisconsin Badgers at the United Center this afternoon, the second leg of the regular season revenge tour in the Windy City. It did not go well.

Share All sharing options for: Michigan 59, Wisconsin 68: So It Goes

I was at the game this afternoon, and I'm tired, so this recap is going to be a little bit shorter than usual (this time, I actually mean it).

It's probably a good thing that I was at the game and not at home writing out this recap as the game moved along (as I normally do), because the first half was an atrocious display of basketball for both sides. Wisconsin couldn't hit a shot from outside but kept plugging away from beyond the arc regardless, like a team of J.R. Smiths. Likewise, Michigan couldn't get much going either, taking a slim 20-17 lead into the half. Yes, 20-17. I was at a high school sectional final last Friday between Niles North and New Trier in Northbrook; sadly, that game was more exciting than this first half.

Michigan did have an 18-10 lead at one point in the first half, but the Badgers "surged" in the final two minutes, with four free throws and a Traevon Jackson trey. The lead could have been greater, but Michigan missed its usual array of bunnies, while also going 0/4 from the line. The less words that are sent through the Intertubes about that 20 minute stretch of what could only debateably be called basketball, the better.

Michigan did hit its first four free throws of the second half, but by the halfway point of the second frame the Badgers held a 43-40 lead, on the back of a flurry of threes, two from Mike Brusewitz and another from, of course, Ben Brust, who finished the game with 14 points while shooting 4/7 from downtown.

Another Brust trey gave the Badgers a 56-45 lead with 6:03 to go, which, in this game, seemed to be as insurmountable as an 11-point lead could ever be. Fortunately, Trey Burke and Mitch McGary went to work, combining for a 9-0 run that pulled Michigan within two with 3:37 to go, spurring a Bo Ryan timeout. The Michigan crowd, which had been decidedly less vocal than its Badger counterpart, came alive, as Michigan once again appeared to be on its way to another Purdue-esque comeback.

An unfortunate sequence then transpired, when it appeared (from my 300-level seats at the other side of the UC) a Wisconsin shot was blocked at the top of the key, but Spike Albrecht was called for a foul while attempting to box out a Wisconsin big near the block. Again, given the quality of my seats, it was hard to tell if it was in fact a foul (plus, the UC was far from accomodating with its jumbotron replays), but it was a pivotal point late in the game. If Michigan secures that ball and scores at the other end, who knows how the final two minutes or so would have gone down.

Michigan turned it over 11 times in this game, a couple more than its conference average but it was by no means a crippling output. However, against Wisconsin, that can often be the tiny, frustratingly incremental factor that contributes to a loss. The Wolverines also only allowed the Badgers to rebound 20% of their misses, a fairly solid effort given Michigan's inability to rebound on the offensive end against basically anybody. In that way, Michigan's defensive rebounding down the home stretch of the season sort of reminds me of Michigan's inability to run the ball against even the worst squads this past football season. 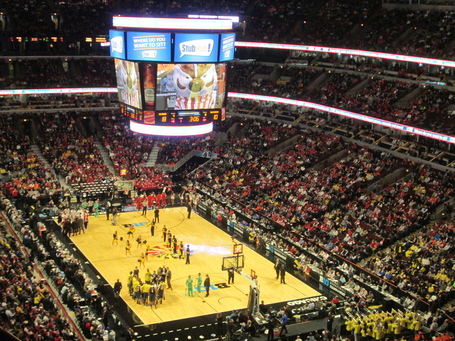 Bucky stares into your soul, stealing your life force 35 seconds at a time.

And so, given these points, it all came down to the highly distilled, somewhat cliched but certainly resonant basketball aphorism: Wisconsin hit shots and made plays while Michigan did not. In the second half, it seemed as if Brusewitz, Brust, etc. couldn't miss, and a glance at the box score underscores that fact; the Badgers scored a whopping 51 points in the second half alone. In case you need to be reminded, Wisconsin scored 65 total points in an overtime game against Michigan at the Kohl Center.

Needless to say, this game was just one more movement in the crashing symphony of incompetence that has been the Michigan defense in the past however many weeks since that 16-0 start, which at this point seems to have taken place in an alternate, bizzaro universe.

Ryan Evans was just 4/12 from the field, but he did score 12 points while also dropping six dimes, checked mostly by a Glenn Robinson III, who clearly could not handle Evans on the block.

On the offensive end, Nik Stauskas was not able to continue his recent stretch of strong play, shooting 1/8 on the day and 0/4 from beyond the arc. Michigan's pre-Big Dance season is over, and the point of no return has long since been passed; at this point, we can only throw our hands up and say "they're just freshmen."

Trey Burke finished just 8/22 but contributed 19 points to Michigan's anemic offensive output, while also dishing out seven assists and pitching in two steals and a block. Drive after drive, Burke did his best Derrick Rose impression in the arena that Rose has made home for the last five seasons. Looking ahead, if Burke works on his game as every player trying to make it in the league should, it's not hard to imagine him finding a spot on NBA floors like the United Center.

I wish I had something more revelatory to say, but I don't. Michigan's defense and the unpredictability of every player on the roster not named Trey Burke downed the Wolverines once again. Either you hang your hat on the overall strength of the Big Ten, and the fact that most teams in the tournament won't play (or execute) the style that many B1G squads do...or, you begin to worry about the possibility of another early exit.

I'm leaning toward the former, but I would be lying if, once the brackets are presented on Sunday, I wouldn't be a little worried if Michigan was placed in a pod with certain teams. But, we'll cross that bridge when we come to it.

For now, in spite of the way this season ended, we have one last opportunity to appreciate what this season has meant to the macroscopic reckoning of Michigan basketball. Take a breath, relax and consider the winding, perilous path behind us. As they always do following a loss, these words ring hollow, but that doesn't mean that they don't bear a kernel of truth.

Given the stakes we impose on everything under the sun, it is somewhat strange to know that the part that "matters" is yet to come.