MRR updates you on the very latest Michigan football recruiting rumblings. How did Da'Shawn Hand's unofficial visit go, and will he be back? Who did Michigan offer this week? That and more.

Super recruit Da'Shawn Hand was in Ann Arbor this weekend, and his presence created plenty of buzz. All of the major Michigan scouting services were keeping tabs on Hand, who started his weekend off by visiting with the coaching staff the morning before spring practice. Hand stuck around to watch his favorite coaching staff yell at current Michigan players, apparently even ordering Mr. Spots afterward. Those guys have the chicken tenders and mozzarella sticks mastered; I always order them despite the fact that I could get two pizzas for the same price.

Da'Shawn then got a tour of the facilities before receiving a full academic tour: 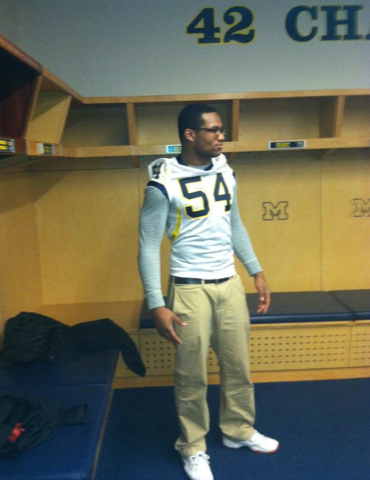 The visit was completed a day later, and it's safe to say that he walked away impressed:

I love this place

AA showed me a lot of love. I gotta come back. #GoBlue

He also tweeted back and forth with Derrick Green, who is doing his best to sell Michigan to Hand. I'm not about to say that Michigan is in the lead, but it's now clear to everyone that Michigan is a legitimate contender.

Parker is a consensus four-star safety, and I think his film still screams "underrated". He's over six feet tall and shows elite tackling ability in space, great closing speed and elite football instincts. I think he's a riser despite his lofty ranking. He already held offers from schools like Alabama and Oklahoma, so getting involved won't be easy.

Brown doesn't have blazing speed or elite explosion but he makes up for it with great lateral agility, balance, hands and the ability to make plays on a hanging ball. He's lanky and could use a year or two in the weight room. His offer sheet is very long: Arizona, California, Ohio State, Oklahoma, Nebraska, Stanford and USC are just some of the schools that have offered him.

Thomas is a massive sophomore who shows great promise. Most of his highlight consists of him plowing over kids in the run game, which is easily the biggest strength of his game. He could easily grow another inch or two before he graduates and is already athletic enough to play tackle at the next level. Alabama and LSU are showing heavy interest, but Michigan is his first BCS offer.

Michigan is putting itself in a strong position with probable 2015 five-star George Campbell, who has been tweeting about Michigan constantly lately. He's also becoming close friends with a handful of Michigan commitments, and even sported maize and blue Adidas gloves to the most recent Nike SPARQ combine: 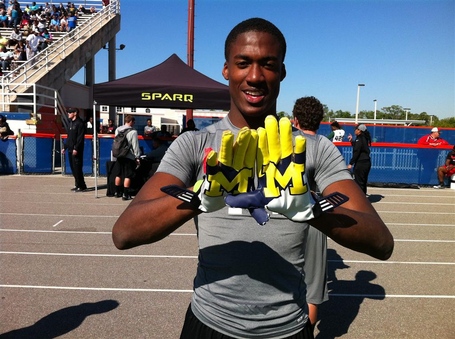 He scored a 106.86 SPARQ rating, which is very impressive for a high school sophomore. He's the teammate of Michigan commitment Mason Cole and wide receiver target Artavis Scott, who took home the MVP award and an invite to The Opening.

Steve Lorenz of 247 Sports talked to Tommy Doles, who has Michigan leading in his recruitment. He liked seeing the coaches in action:

"It was great to sit in and see the coaches in action," Doles said. "I liked seeing the organization and the intensity of not only the coaches, but the players as well."

Funk - "I got to watch him in action and I like the way he coaches," he said. "He obviously knows what he's doing and he's a great communicator as a coach. I would definitely like playing for him."

Doles is tall and very skinny for a lineman: he needs to put on at least fifty pounds before he's ready to play on the line at the next level. He's still rated as a four-star lineman.

New Jersey athlete Noah Brown is a player to keep an eye on. He's waiting on an offer from Michigan, who is still getting to know Brown, but he already holds offers from the likes of Boston College, Michigan State, Nebraska Virginia Tech and Wisconsin. His film:

He's raw but definitely has the ability to play for a BCS school.