Denard Robinson was a special college football player. Offered by some out of high school to play CB, he excelled at Michigan by playing mostly QB. At the next level, people are predicting him to be anything from a special teams stand out to a RB, but most are thinking of him as a WR. Obviously, there is still a lot we don't know, but we can look at the evidence we do have to get a feel for what fits Denard's special talents best. There is still a lot he must work on, and there are somethings he does well already.

(In this two part feature we will look at Denard and how he fits at many of the positions. This article will focus on CB, QB, and special teams.) 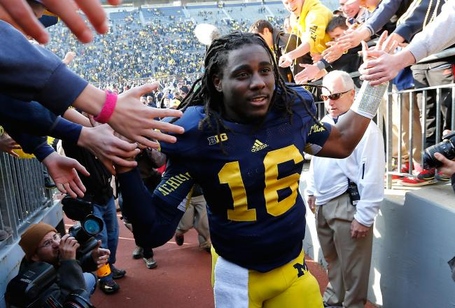 Denard Robinson was a special college football player. Offered by some out of high school to play CB, he excelled at Michigan by playing mostly QB. At the next level, people are predicting him to be anything from a special teams stand out to a RB, but most are thinking of him as a WR. Obviously, there is still a lot we don't know, but we can look at the evidence we do have to get a feel for what fits Denard's special talents best. There is still a lot he must work on, and there are somethings he does well already. In this two part feature we will look at Denard and how he fits at many of the positions. This article will focus on CB, QB, and special teams.

What NFL scouts see in Denard when they think of him as a CB is his speed and start and stop quickness. That's all nice and fine, but there are many more questions than answers here. Namely: how is Denard at flipping his hips; how is Denard at back peddling; how is Denard at route and pattern recognition? To me, from what I've seen of Denard, the way he cuts and gets in and out of breaks is very different than a CB. Denard isn't smooth in that he flips and glides through the hips. Denard's quickness comes from his ability to stop on a dime and ultimately his vision with the ball in his hands. He breaks down and has a very strong lateral cut to break arm tackles, but you never really see him stop, turn his hips, and run.

His footwork would need a major overhaul. The way Denard cuts is often on his inside foot on shallow cuts. Cutting off your inside foot has been proven to get you in and out of cuts faster and keeps you moving closer to full speed, but it also causes him to slip a lot. At the corner position this can't happen.

As far as his tackling, well:

He's slightly above Deion Sanders in this category. That's not saying much. But at least (perhaps in a bit of a rage) he is willing to lower his shoulder and hit someone, but his form is pretty terrible and he could have saved himself some grief by just getting the guy out of bounds.

At the end of the day he may have the ability and all the physical tools to be a DB in the NFL, but I do not see an NFL team taking on a complete project at this position. He has never played defense at a college level, and while he may understand the coverages (from a QB prospective at least), he probably doesn't understand fully the footwork, flow, route paterns, etc. from a cornerback prospective. Even the small things, pre-snap alignment, stance, timing, keys, eyes, will all be brand new to him as they haven't been coached to him. That is probably too much for an NFL team to take on, as they can most likely find someone that maybe doesn't have the ceiling, but can play right now for them and not take up a roster spot where roster spots are very limited.

How he stacks up to other Corners at Combine

40 Yard Dash: His 4.43 would have put him 11th at the combine. His speed is good enough, there really isn't a question about that. The top speed for a corner was a 4.36, which is a difference fans will go crazy about, but in reality isn't much.

Vertical Jump: With a jump of 36.5", Denard would have placed 9th at the combine. This shows the leg strength that he has and explosion he has.

Broad Jump: Denard would have finished just outside the top 20 for broad jump. Not a huge deal.

3 Cone Drill: Of bigger concern is the fact that Denard would have finished outside the top 15 in this drill. This kind of goes to show that Denard's change in direction maybe isn't the best. It's more his lateral jump step and stopping instantly combined with his vision.

20 Yard Shuttle: In my opinion, this is the most important drill at the combine for corners. Denard ran a 4.22. This also puts him outside the top 15 for corners and well behind the leader.

How he stacks up as far as size measurables

Height: The average height of the top graded corners is about 6'. Denard is a couple inches smaller than that, but is well within the range for a corner.

Weight: The top graded out CBs average about 195 lbs, which is right around where Denard is.

Arm Length: Average arm length is about 32.5, which is right where Denard is.

Everyone always brings up the possibility of Denard returning punts and kicks. The reasons are obvious. Start these at the correct moment and tell me they don't look like a guy taking back a...

Obvious questions arise about Denard's ability to catch the ball, particularly on punts in traffic. To be honest with you, I do not see him having immediate success returning punts. Catching punts takes an odd amount of reps until you get comfortable. Being able to make those same catches and judgement calls in traffic (or even sometimes with people behind you) is even harder. I think Denard would be great at returning punts if he could catch the ball cleanly and have everyone in front of him still so he could use his vision, but the risk at this point is still too high. Give him a year or two to work at it though...

Kickoffs on the other hand I think is something he is ready for immediately. Kickoffs are far easier to catch, and the flow is a lot more what Denard is accustomed to. For kickoffs, he will essentially have a lead blocker (the other return man) to cut off of. His slight cuts going full speed (the ones where he cuts off his inside foot) are extremely dangerous. He then has the ability to break it to the sideline, stop on a dime, use his vision and switch fields (cut diagonally against the grain, not reversing fields by running backwards). In my mind, his running style is custom fitted for kickoff returns. He only needs to start getting comfortable seeing the kicking team, knowing when people are out of their lanes, and understanding the blocking in front of him.

Because of his lack of experience tackling, he doesn't really seem like a fit for either of the coverage units. If he can improve his tackling it improve his upper body strength, he could potentially be a viable gunner on punt coverage or what is essentially the free safety of the kick coverage.

At this point, there are very few people vying for Denard to become an NFL QB. But his ability as a QB can still play a significant role as an NFL player and there are a few problems I've seen in the way he plays QB that he needs to fix if he wants to throw passes in the pros. I'll start with the positives: Denard has a strong arm; not being a conventional QB, he probably won't have to make short passes over the middle, meaning despite his height he should be able to see his targets.

If you sense where I'm taking this, I think teams are looking at Denard as someone that can throw a HB pass or a pass off of a reverse. Now the problems with this picture. Despite Robinson's strong arm, he is an arm thrower. By this I mean that he doesn't use his legs and body rotation well in his throwing mechanics, particularly when throwing on the run. The fact that Denard struggled with accuracy is in part because of this. By just throwing with his arm, his mechanics were less consistent, meaning he couldn't place the ball as well as other QBs can. QBs that are arm throwers tend to squeeze the ball too hard, which causes the ball to flutter. You probably saw this in many of Denard's throws (inserted a happy one for sanity sake)

If Denard wants to be a viable option on end around throws, he needs to get comfortable setting his feet off the run and becoming more consistent with his touch by having more fundamental mechanics. He won't have to worry as much about stepping into a collapsing pocket, so this should be easier for him now, but it's something he has to get used to if he wants to be taken seriously in that role. Without getting a better handle on the footwork, teams will be hesitant to trust a player that has proven to struggle with the deep ball throughout his career.

The next part of this feature will be a bit more in depth because it's the two positions where we can extrapolate a bit more. It's also the two possibilities people bring up most frequently: WR and RB.