FRR updates you on the very latest Michigan football recruiting rumblings. Which youngsters did Michigan extend offers to? How scary does Da'Shawn Hand look in a winged helmet? That and more.

Share All sharing options for: Friday Recruiting Roundup Is Wild

Michigan is starting to offer tall back after tall back. Soso doesn't quite have elite quickness or speed just yet, but he shows great balance and overall athleticism. When I watch his tape I see a poor man's Joe Mixon, although Mixon is a year older and Soso could make strides by the time his recruiting cycle comes around. Ohio State and Oklahoma are his other major offers.

You read that correctly: Michigan has offered a high school freshman. He's already 6'4" and 238 pounds, which means he could easily get to 6'7", 270 by the time he's a senior in high school. He's very raw right now but is still a virtual lock to be at least a four-star prospect by the time his cycle comes around. He already holds offers from the likes of Clemson, Michigan, Tennessee and Virginia Tech.

Stud defensive end Da'Shawn Hand was in town last weekend, and I came across this gem from his visit: 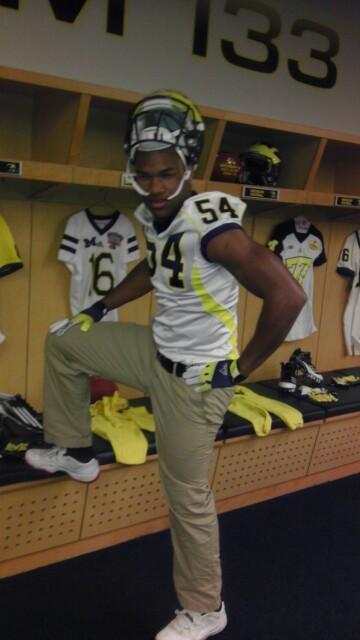 Fred Jackson would actually be correct if he called Hand the best Michigan defensive end ever but with more speed. Someone get on that. Also, Hand was asked about Greg Mattison, to which he replied, "That dude is wild." That he is.

Michigan offensive guard commitment Mason Cole speaks to Scout about why he pulled the trigger when he visited Ann Arbor. Just your usual fluff.

Five-star running back Leonard Fournette plans on waiting to make a decision.

Michigan and Rutgers are "at the top" for four-star wide receiver KJ Williams.

Michael Ferns is coming off of a knee injury he suffered back in January, but that hasn't stopped him from lifting ridiculous amounts of weight. He now squats 480 pounds, deadlifts 535 pounds and hang cleans 315 pounds. All of those numbers are ridiculous, but that clean weight really sticks out as freakin' ridicilis [Kanye voice].

Well that's awkward. The word "offer" is thrown around far too often today, with verbal offers and interest all skewing the actual meaning of the word.