The Michigan hockey team came up short of a CCHA tournament championship, losing 3-1 to Notre Dame. The loss will mark the first time in 23 years Michigan failed to qualify for the NCAA tournament.

After 22 glorious seasons, it's finally over. For the first time in over 2 decades, Michigan will be on the proverbial couch for the NCAA Hockey Championships. That overwhelming sigh of relief you feel to Ann Arbor's West is the rest of the teams in the Grand Rapids regional breathing a sigh of relief. Had the Wolverines completed their miracle run to the CCHA title they would have been almost certainly seeded fourth in the Grand Rapids, MI regional drawing the first seed Golden Gophers. No one was playing better late in the season than Michigan, despite having done less with more talent early. They'd have been dangerous and probably the most talented four seed to sneak into the tourney in some time.

In a season marred by first half disappointment and sub-standard netminding, Michigan clawed and fought their way into an end of season murder run that looked certain to culminate in the big ice dance after a 6-2 throttling of Miami of Ohio Saturday in the CCHA semifinal. In the final on Sunday they were less dominating, to say the least. Notre Dame bossed the play at the Joe. The Irish looked fast, their D assertive and once they potted home a 2-1 marker barely into the third frame, their 1-3-1 forecheck Bo Ryan'd Michigan into a different game than Red Berenson and co. would have liked. Despite a few close calls including a very pretty quick passing play that picked apart a clogged Irish defensive zone only to have a one timer fired square into Steve Summerhays', the Irish held on and put home a quasi empty netter with Steve Racine on his way to the bench to ice it by 2.

22 years is a long time. I will spare you the price of gas and #1 song factoids from 1990. Only D Lee Moffie and G Adam Janecyk were even alive the last time Michigan weren't wearing their dancing skates. That's a Dynasty, Miami, please return to the kids' table with your zero national championships. The 2012-13 Wolverines should be proud of their run, encouraged by their end, but fully aware they must wear the mantle of the team that ended Red's run. I think they are:

What's ahead for Michigan? In addition to your standard ho-hum worries over summer early exits (cough*TROUBA*cough) and keeping OHL paws off the incoming future stars, it is the beginning of the Big Ten Hockey Conference and a chance for Michigan to start another streak. As Bob Dylan wrote, "The times, they are a changin'."

Currently, college hockey alumni make up 31% of the NHL rosters. This number has steadily increased over the past decade which speaks to the quality of the product. Chris Peters put together a great piece on the educated elephant in the hockey room for CBS sports which further illuminates. 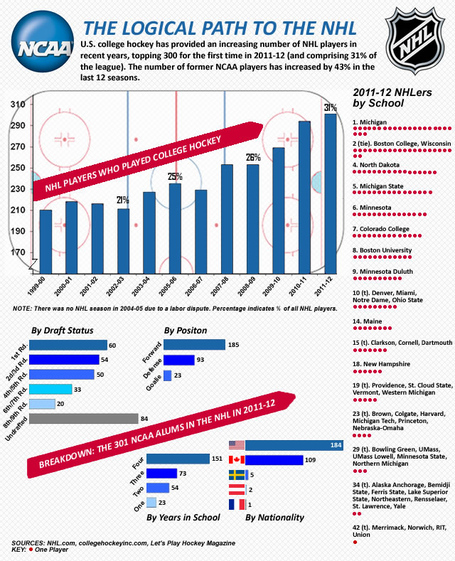 With the B1G TV network, massive investment into Penn State's hockey program and two flagships of collegiate hockey in Michigan and Minnesota to go with relatively stable programs MSU, OSU and Wisconsin, B1G hockey is going to be the college hockey league with the best education package, the best rivalries, the best arenas and the best TV coverage. As much as I loathe how the SEC feels about its football, it's how the B1G will be with hockey. Do not pine for rivalries lost with Notre Dame, Miami and the directional Michigans. Look forward to more Minnesota and Wisconsin and then THIS.

Early defections go hand in hand with top end talent. This is not Kentucky basketball, but there are some risks. Trouba, Guptill, Bennett, Merrill, and Di Giuseppe are your worries this time around. With regard to Trouba, he is so much like Jack Johnson as a freshman, it's eerie. 3:30 into the first period Sunday, he turned the puck over from our end line 15 feet from Racine's net and then absolutely erased someone on the boards. Later in the first, he set up Michigan's lone goal, shorthanded to end the period. The guy is one of the most talented hockey players I've ever seen in Maize and Blue. And that was the most Jack Johnson period ever not by Jack Johnson.

My point is that JMFJ stayed for 2 years, and now he's locked into a number 1 NHL blue line pairing and blossoming. Can someone please give Trouba Jack's number or make sure he sees this photo of Jack in his new Ferrari from 2011. 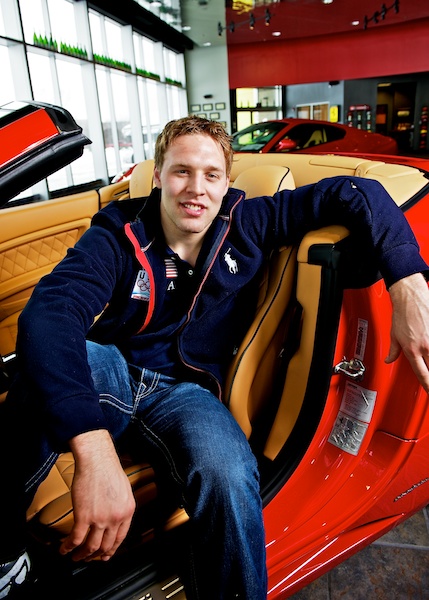 We should know about his future very soon. My guess is Winnipeg would like to get him for part of their NHL season for some seasoning if it's going to be now. Otherwise he might stick around. If Trey Burke stays for 2 and Lewan for his final year, I'll believe anything. We'll find out soon enough.

There will, of course, be defections and additions, small changes and large ones, but Michigan hockey will press on. Once again the promising freshmen will be well seasoned sophomores the goalies more experienced, and the annual infusion of talent that comes from recruiting as Michigan does. I fully expect a new streak starts next Fall.