MRR updates you on the very latest Michigan football recruiting rumblings. Who all made it to Ann Arbor for the basketball contest with Michigan State? Is Michigan on the verge of flipping a key Spartan? 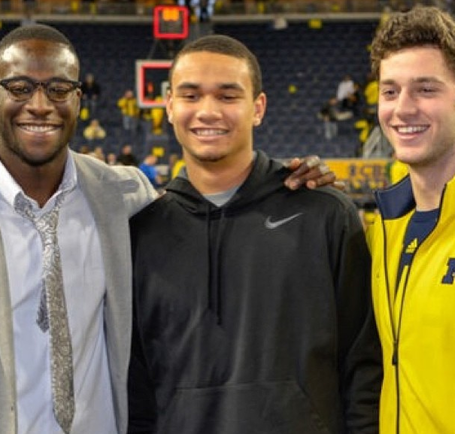 No surprise to see that Morris is still on the recruiting trail. Harris had a great time watching Michigan put the little brother away, sitting front row as Trey Burke made Tom Izzo speechless: 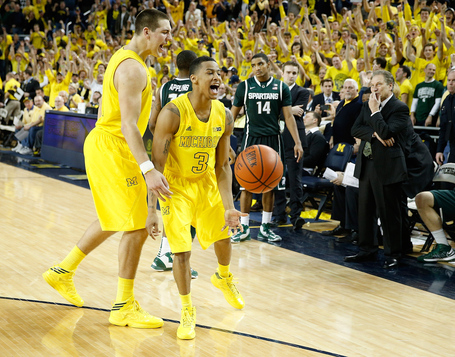 Afterward it became clear that Michigan has caught Michigan State in Harris' recruitment, and many now speculate that the Wolverines lead by a wide margin. This doesn't come as a surprise: Harris will be in Ann Arbor for the third straight week when Michigan plays Indiana, and the last time he was in East Lansing the Spartans were taking on... Michigan.

Recruits aren't dumb. They pay attention to coaching staffs, fan bases, wins and recruiting rankings; Harris knows that Michigan's program is moving in the upward direction in all of those categories. He's also close with two future Michigan quarterbacks, both of whom are ranked higher than any Spartan signal caller in their respective classes. At this point I would be worried about Harris if I was a Michigan State fan.

Campbell, Weber and Harris are all Cass Tech players in the class of 2015. There's a chance that Campbell never actually receives an offer; Alabi already holds an offer and will probably be a four-star. Gelen Robinson is slowly climbing up college boards, and Winovich is an outside linebacker prospect who holds offers from Florida State, Northwestern and West Virginia, but Michigan already has Michael Ferns slotted for the SAM position.

Star defensive end Malik McDowell will be back on campus for the Indiana game along with Drake Harris and others.

Five-star corner Adoree' Jackson lists Michigan as one of his top schools:

It will be a long process for Jackson, who holds offers from just about everyone.

Linebacker commit Michael Ferns has been offered by Alabama. He also talked to Nick Saban on the phone for an extensive period of time, but he remains firmly committed to Michigan. Saban knows an elite linebacker when he sees one: Michigan is getting one of the best in the country in Ferns.

Please bring Artavis Scott with you as well!

Had a great time at the Raw Talent combine. Ran a 4.34 40! Check out the complete results in a week on raw talent sports website #edsup

Remember his name. He's a little on the shorter side, but he's a lock to be a four-star prospect anyway.

He'll be one of the in-state four-star players in his class.

Man I love coach Ferringo from Michigan he's one of the coolest coaches around!! #goblue #Michigan

Andrews is a promising tight end prospect, so hopefully Ferringo can get him on campus.