Friday Recruiting Roundup Wants You To See How Good I Look

FRR keeps you updated on the very latest Michigan football recruiting rumblings. Who's scheduled to visit Ann Arbor this weekend for the basketball contest against Indiana? Which Michigan recruits made the new Scout 100? That and much more.

Share All sharing options for: Friday Recruiting Roundup Wants You To See How Good I Look

Another Big Recruiting Weekend Ahead

Last weekend was big for the Wolverines, and this weekend is shaping up to be solid as well. Those on the list of visitors include:

MI OG/C Tommy Doles - Doles is the teammate of stud receiver Drake Harris. He holds an offer from Michigan and could be the next name to drop in favor of the Wolverines. He needs to put on at least forty pounds, so count him as another project interior lineman that Michigan takes because they already have depth in front of him.

MI WR Drake Harris - Harris will be in Ann Arbor for the third straight week. He remains committed to Michigan State; that commitment withers by the day. Michigan has made Harris a priority because they're thin at receiver and he's very talented.

MI CB Jalen Embry - Embry holds offers from a host of MAC schools, although that should change soon given his recent camp performance. He could rise into that fringe 3-star/4-star range.

OH CB Tyree Kinnel - Kinnel is a 2015 prospect seeing interest from the Midwest powers, although Michigan has yet to come through with and offer.

MI DE Malik McDowell - You know the story on McDowell by know; he's going to be one of the most sought-after players in the entire country. Michigan needs to keep the pedal to the floor here.

MI QB Jayru Campbell - Campbell is a 2015 QB prospect out of Cass Tech. He helped lead Cass Tech to two state titles, but he's far from polished and might not ever receive an offer. Offers from Alabama and Notre Dame are pseudo-offers: they aren't written offers and are just an insurance policy for the coach in terms of recruiting.

MI DT Joshua Alabi - Alabi is another 2015 Cass Tech product. He should be a four-star and will see interest from the usual Midwest suspects. Already holds offers from Michigan and Michigan State.

#97: Bryan Mone - Has a chance to climb with strong camp performances; lacks five-star explosion.
#115 Michael Ferns - Could climb into the top 100; lack of lateral agility will keep him from the top 50.
#142 Mason Cole - Length and current weight will keep him from jumping too high on any list; top 200 lock.

Other players of interest:

Michigan is very much involved with at least a third of this short list, and there are surely more in the Scout 300 with whom Michigan is still developing its relationship with. Also, Ctrl+B to the fullest, yo.

Hey Everyone! Come See How Good Dumb I Look!

Patrick Vint of BHGP wrote up a [sarcastic] piece describing just how ridiculous it is to believe self-reported high school forty-yard dash times. It's a solid piece if you can deal with more than 1,500 words of sarcasm, but it gets the point across nevertheless. Colleges aren't making players slower, they're simply recruiting kids who lie about their sprint times in their player profiles.

I scrolled down the article without actually bothering to read it, posting a comment about how high school forty-yard dash times are inaccurate some ninety percent of the time. This naturally led to some golden replies to my utterly ignorant original comment:

The sound of this article going over your head.
-Zach Travis

It's almost like Patrick said that exact thing twice in this article, once in all caps.

The only other explanation is that almost all high school 40 times are bogus, but there's no way that's true.

I didn't even realize that I had made such an asinine mistake until I scrolled through my SBN history on my iPhone while sitting in a UHS waiting room. I clicked on the article I had commented on, scrolled down, and.. woah. So yea, let me have some more in our comment section, because it actually made me laugh out loud at myself for a solid minute in the middle of a hospital.

Consensus five-star all-everything defensive end Da'Shawn Hand will be in town for Michigan's spring practices on March 16th and 17th. Seeing Mattison and Hoke scream at defensive lineman should help the Wolverines' chances.

State of Michigan DE/OLB Lawrence Marshall has been offered by Oklahoma. This is most likely due to the move of Jerry Montgomery to Oklahoma; Michigan could find itself in a dogfight with Oklahoma for a few different recruits down the road because of one coaching move.

Offensive lineman Orlando Brown has a new top seven, in no specific order: 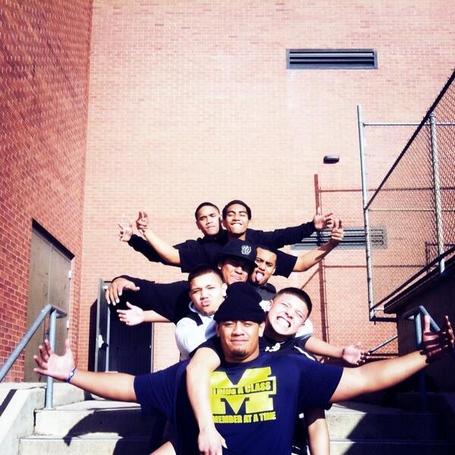 It's clear that Harris has the hands and overall athleticism to be an elite target at the next level.