MRR updates you on the very latest Michigan football recruiting rumblings. How many elite receivers can Michigan grab in the class of 2014? Which four-star tight end nearly pulled the trigger during the spring game? That and much more.

The coaching staff has been great on the recruiting trail since it set foot on campus. Still, people questioned Michigan's ability to pull in elite offensive skill players. Derrick Green took that proverbial monkey off of Hoke's back, and consensus four-star receiver Drake Harris just punched it for good measure:

Just officially committed to The University Of Michigan!

Harris, who could end up receiving a fifth star, removes all doubt about this staff's ability to reel in great offensive talent. Why is he rated to highly? Check the New Blue post to see why.

So you're definitely staying for a fifth year? Pop bottles!

In fact, Michigan's future offense was a big part in landing the talented receiver. Fellow commit, quarterback Wilton Speight (Richmond, Va./Collegiate School), was heavily involved with the recruitment of Harris and believes the addition is something special.

"Drake committing means more than anyone can express," Speight said. "It gives this class and school a tremendous athlete, a huge name to add to our recruiting class, but most importantly a great friend and humble human being."

The staff really has an eye for kids who attract others to the University. Morris, Ferns, and now Speight have all done major work on the recruiting trail. Speaking of Speight and Harris, the two will be playing together in the Under Armour All-American Game.

The biggest news might be Harris' intentions to enroll early:

"He's (plans on) taking two online classes, both math classes, this summer," Fellows said. "After that he should be on track (to graduate early). He told me (Sunday) he wants to win another state championship and then get ready for U-M."

Harris will be on campus for spring ball, allowing him to work with Gardner and put on some needed weight before the start of the 2014 season. He's a lock to be an impact freshman, and enrolling early might make him a lock to start. He's that good.

Four-star receiver Artavis Scott and four-star tight end Daniel Helm both visited for the spring game this weekend, and both enjoyed their visits. Scott got a chance to talk to Desmond Howard, who was actually a very similar recruit coming out of high school. He plans on coming back:

@m_ferns10 I will be back bro don't worry

Michigan is in solid position here. Don't worry about the Harris commitment affecting Scott; both know that they're destined for different receiving roles at the next level.

"Michigan is a school I really, really like," Helm continued. "My visits there went well both times."

There isn't one visit over the past month and a half that sticks out to Helm but he does have four schools he's focusing on.

"The four schools I have really grown to like are Michigan, Tennessee, Florida, and Ole Miss," he said. "Most likely my choice will come from one of those four schools. I'll have a decision before my season starts," Helm explained. "It will probably take place over the summer, but perhaps earlier than that."

He almost pulled the trigger on the trip, so add him to the list of players who could commit at any moment.

In short, Hoke and company will be watching more tape, making phone calls to high school coaches and sending out new offers. The wave of offers might not be huge, as the staff just sent out a handful of offers to linebackers and already established its board for the rest of the positions. This class is more about quality than quantity, so new offers will be harder to come by. 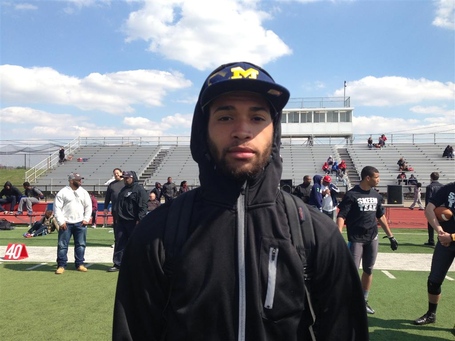 He's also on the list of players who could commit at any moment. A combination of Harris, Scott and one of Williams or Ways would be just great.

New WILL linebacker offer Kyron Watson will visit Michigan next week. Michigan is easily his best offer to date, so don't be surprised if the Illinois product puts the Wolverines at the top or pulls the trigger.

Three-star offensive tackle Orlando Brown has a top three of Arkansas, Oklahoma and Tennessee. Four other schools are still involved:

Iowa, Michigan, Ohio state, and South Carolina are all still in my recruitment

Brown is massive, standing at 6'7", 340 pounds. He's a project, but he also has a very high ceiling. Alabama, Florida, Georgia, Notre Dame, Ohio State and just about every other school in the country have all offered him.

Class of 2016 defensive tackle Ostell Martin enjoyed his visit to Michigan. He's a 2016 prospect out of Detroit Cass Tech.

The above mentioned Daniel Helm was famous before he became a four-star tight end recruit:

I'm almost positive I saw this on television once. He has tried to repeat the shot in practice and failed. My shocked face.

247 Sports is adding quite a few cool new features to its recruiting profiles, including a "crystal ball" and position-specific skill ratings. I haven't ever paid for recruiting information, but I would probably trend toward 247 if I did.

BONUS: Michigan is now a heavy lean for five-star Jabrill Peppers, according to people at 247 and Rivals. Rivals Mike chimes in:

Heard from great source that 5 star DB Jabrill Peppers is now heavy lean to #Michigan and that #OhioState and #LSU have dropped on list.

Some now speculate that Peppers will visit Stanford and commit to Michigan thereafter if they don't do anything huge to make up the ground. Landing Peppers would be absolutely huge, and it would give Michigan a top-ten talent for the second year in a row.