After Hardaway: Making up Tim's production

Tim Hardaway Jr. was a three year starter and one of Michigan's most relied upon offensive weapons. Where does that production get made up now that he is gone?

Share All sharing options for: After Hardaway: Making up Tim's production

(Note: I'm not going to write an article like this about Trey Burke for the same reason I don't dignify questions of "how does Michigan replace Burke?" posed by rival fans. You don't. His role in the offense was too central, and the thing can't exist as it did. You don't replace all-everything, once-in-a-generation point guards. You just get by. Hardaway is the more interesting case.)

Can you remember the last Michigan player to start on three consecutive NCAA tournament teams? Now that player is Tim Hardaway Jr. Given Michigan's struggles getting to the tournamnet over the past decade and a half that isn't surprising, but it should sufficiently prove Hardaway's worth to the team, especially the offense.

As a freshman he was an efficient scorer that barely turned the ball over (11.1 TO%) and shot the ball well (48/37/77 shooting splits). He fed off his sleeper status and Darius Morris to rack up a few all-Freshman honors. As a sophomore he was supposed to take over the Michigan offense, but his shooting percentages from outside and the FT line dropped while his 2pt% actually went up five points. His inconsistency and Burke's quick dominance placed Hardaway in a secondary role offensively. It was one which he would adapt to as a junior when his three point percentage went back up (37%) and he posted career highs in assists and rebounds per game. All the while he averaged just around 14 points per game during his career and played over 75% of available minutes at his position.

What Hardaway lacked was the ability to consistently deliver on the offensive end. There would be the hot shooting nights followed hot on the heels by 0-fer abominations where he spent the night forcing his shot from 18-23 feet. It often seemed like you would know within the first five minutes of a game what Tim would show up. If he got to the basket early for a couple easy buckets, things were looking up. If he was content to force contested threes and pull up from 18-feet late in the shot clock, it was going to be one of those games.

Still, you don't leave early to go to the NBA for no reason, and Hardaway brings a great deal of skill and athleticism to the shooting guard position, as well as prototypical size at 6'6, 205 lbs. That isn't an easily replaceable cog in an offense as effective as Michigan's, but unlike Burke, his production at the two can be made up for by a couple younger players adapting to larger roles in the offense.

So where does Michigan look for a replacement? Minutes at the two look to be coming from two different players, both of whom you're already familiar with.

The sophomore seems like a natural fit to slide over from the three spot and into the backcourt. He brings the requisite shooting touch from outside, hitting 44 percent of his 182 three point attempts. He can also flash his "not just a shooter" skillset on drives to the basket. More importantly, his ball handling is better than what Hardaway brought to the table, so much so that Stuaskas was talked about as a possible option to handle the ball and give Burke a rest before we all got Spike'd last season.

What Stauskas doesn't have, at least not yet, is the ability to generate his own offense and get into the lane against strong defenses. While Hardaway wasn't always the most assertive with the ball -- often preferring to jack long, contested shots rather than take the ball to the rack -- he is a better finisher at the rim (71% to 60% for Stuaskas) and even in his worst of three years at getting to the line (3.2 fouls drawn/40 mins down from 4.4 and 4.7 his first two years) he surpasses Stuaskas' 2.7 FD/40.

However, Hardaway also had a tendency to pull up for a lot of jumpers which he hit with marginal success, just 35 percent on 2pt jumpers which were over one-third of his shots. Stuaskas' share of 2pt jumpers was just 15 percent.

Offensively it seems that Stuaskas brings a different quality to the position. More of an outside gunner that will depend heavily on pick and rolls to get to the basket than a slasher. And while Stauskas has shown hints of that kind of skillset, he is much more inconsistent in it than Hardaway was.

Stuaskas will also need to improve as a rebounder. He posts a DR% less than 10, which is lower than Hardaway's worst year (12.2). Assists will need to improve as well, as his assist rate was about half of Hardaway's. However, these are reasonable assumptions to make as Stauskas is going to have the benefit of a full offseason in the weight room to bulk up some (he played at just 190 lbs) and more of a role as a ball handler with Trey Burke gone. Ditto defense where Hardaway Jr. was never a standout but progressed to being something of a solid defensive option by the end of his career.

Michigan's other option at shooting guard is a little more unknown/intriguing. Caris LeVert started the season as a lock to redshirt and ended it as one of John Beilein's go to crunch time players. There were ups and downs, and his reputation as a off-the-bench defensive spark plug was tarnished a bit by those times that he most certainly was a defensive liability (Luke Hancock says hello). Still, for a freshman to play himself out of a redshirt and into the rotation above experienced contributors like Matt Vogrich says something about his talent and what the coaches think of him.

And really, LeVert seems like more the Hardaway clone than Stauskas is. No that isn't raycess. I get it, but the buzz around LeVert early was that he was a scorer and a slasher. Stauskas is Hardaway Jr. in bad games, an outside shooter that is often content to float around the perimeter.

While the talk around LeVert as a freshman didn't translate much in his production as a slasher, one has to consider the fact that he was in the midst of gaining 20 pounds just to get to "undersized". He also showed a great deal of athleticism at times, including this gem. 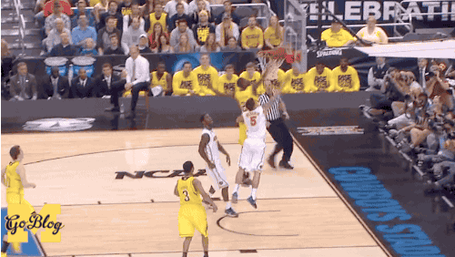 Of course, that play came after a pretty regrettable turnover, which one has to consider in the case of LeVert. For all the potential as a scorer, shooter (LeVert hit some very big threes as a freshman; Illinois and Syracuse come to mind), and defender, he is still far from developed even in comparison to Stuaskas.

In fact, if Michigan loses Glenn Robinson III to the NBA draft, LeVert's development this summer could be the key factor in Michigan's ability to compete at a high level next winter. The Wolverines have a dearth of options in the backcourt as it stands, and with Robinson III gone that will push freshman five star Zak Irvin almost exclusively to the four and leave a hole to be filled at the two wing spots by Stuaskas and LeVert. Michigan can get away with playing both point guards simultaneously -- something Beilein has shown he is comfortable doing -- as well as going big with two of Morgan, Horford and Bielfeldt (freshman Mark Donnal could slot in here as well if he is particularly college ready). However, if this season showed anything it is that Michigan's offense is most dangerous when it is spread out with scorers at the 2-4 positions and losing GRIII will cut into Michigan's potential lineups at those three spots.

But given the level of talent that Michigan has on the roster as well as that coming to campus this summer, things look to be well set up for Michigan to compete for another NCAA tournament trip. It will just have to be without the shooting guard that helped push Michigan to the last three.