Michigan is going to the Final Four, and I still can't believe it.

The NCAA tournament is a strange concentrated series of staccato blasts, short weekends of fevered action moving faster than Time itself. Hopes rise and they fall, expectations collapse and are born anew. It is sport on a subatomic level, each game meaningful on an elemental level. March Madness is like staring the supernatural in the face, not unlike the Sodees in Escanaba in Da Moonlight. You see what you see and sometimes you just can't believe it. Sometimes you even go crazy, waiting for that first buck. You're 43 and wondering: when?

I talked about expectations last week before this past weekend's games began, and most of that still applies. This has been a successful season, and I feel no need to qualify that statement. If that sounds like I'm preparing for defeat, I'm not: the ultimate goal is to win a title, yes, but to ignore all the rest is to stare at the atom and forget that it is but one piece in the larger framework of things.

I've mentioned this many times before when writing about this team throughout the past few years, but it bears repeating for the sake of context. Back when I was a freshman at Michigan in 2007, Beilein's first year in Ann Arbor, we had been recently relieved from an era of play in which the parts formed an amorphous, uncoordinated whole, a Voltron commanded by five players each speaking a different language from various farflung corners of the Earth. Players like Daniel Horton, Lester Abram, Bernard Robinson Jr., and so on, were good players on their own. They were fun to watch in spurts, every once in a while reminding us why they were considered good basketball players in the first place.

On Feb. 21, 2006, Horton scored 39 points against an Illinois squad that would finish the season 25-6 (11-5), an eventual five-seed in the Big Dance. Like Stauskas on Sunday, Horton could not miss. He floated inches above the floor for forty minutes; when the game was over, Michigan had won, 72-64. The win pushed Michigan to 18-7 (8-6), positioning itself for a chance to possibly get off of the bubble and join the tournament field for the first time in a while.

Michigan finished the regular season with a pair of losses, at Ohio State by 10 and a two-point loss to 16-10 (8-7) Indiana at home. Every year was such; the final weeks came, and the bitter remainder at the bottom of the glass spoke of a pleading hope for a Big Ten tournament run to save us all. All we needed was a big tournament win or two or three and we were in. It always seemed so feasible, even if it never was.

In the first round of the Big Ten tournament, the Wolverines lost to a 15-10 (5-11) Minnesota squad, effectively quashing any hopes of a tournament bid. Michigan led at the half by four but lost the game, 59-55. No drama, no fleeting chance, no anything: a ponderous thud.

In 2007, my freshman year, Beilein brought a new hope, as every newly hired coach does to a certain extent. The last guy failed, and by virtue of not being that guy, for a brief time there is a naive and somewhat baseless faith in the concept of newness. We knew he could coach, of course, but in the beginning the possibilities are limitless. It is much easier to focus on abstract notions of success delivered from above by a benevolent stork instead of calculated scribbles on a dry erase board.

Being a freshman, not knowing anything about anything, I bought season tickets and went to every game that season. Going to the first game of the season, a blowout against Radford in the old dungeon that was Crisler Arena, has somehow endured as a moment to remember. I had a feeling that Michigan would not be good that season; it didn't matter. A sophomore DeShawn Sims scored 23 and a true freshman Manny Harris (in the first game of his Michigan career) scored 13. It was the beginning of something, even if the beginning arose in the form of a curling tendril of smoke from the rubble.

Nonetheless, Michigan went 10-22 that season, winning just nine pre-Big Ten tournament games and just five conference games. A three-game winning streak late in the season against Penn State, Iowa and Ohio State, in retrospect, seems even more miraculous now than it did then.

Slowly but surely, Michigan climbed out of the abyss. In fact, there was nothing slow about it at all, as the Wolverines went to the NCAA Tournament the very next season, even grabbing a first-round victory against a higher-seeded Clemson squad. The season after was an unfortunate slip-up, a momentary fall down the Ladder of Incrementally Attained Competence. So, too, was last year's first round loss to Ohio. Again: atoms. That was a bad atom.

I had the fortune of attending Michigan's matchup in Madison Square Garden way back on Nov. 23, back when everything was new and being ranked so highly was a novel concept. 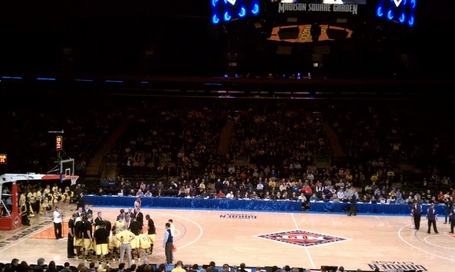 From there, Michigan rolled to a 16-0 mark, after which a shower of bad atoms gradually muddied the waters. Doubts crept in, and some may have wondered if this team really was that much better than last year's squad. The defeat in the United Center, one which is hard to believe happened just over two weeks ago, was one more nail placed next to the coffin, waiting to be hammered in.

And yet, as we've found, the tournament might as well be a different season entirely. The players are not the same players they were in November, December, January, February and even into early March. The whole structure of the game was shifting all along, which makes the tracking of the individual atom not unlike an attempt to count the stars, one by one.

Can you believe it? I'm not sure if I do. I don't think I will until the ball goes up again at 8:49 Saturday night in Atlanta.

It has been well over 24 hours since the Florida game ended, and that still holds true. Others will poke fun, talking about undeserved brashness given our tournament history (or lack thereof), and they are right. We haven't been there; that is, many of us haven't. If you can believe it, John Beilein hasn't been here before. This is as new to him as it is to me and you. Ask him about it and he'll tell you about that time he went to the Final Four with his wife many years ago.

Back in 2007, when expectations were a distant, unattainable horizon not worth summoning or bringing pen to paper just yet, games against Radford and grabbing a t-shirt in the t-shirt tossing segment of a home loss against Central Michigan were the shining moments. I still have that t-shirt, which merely reads "2007 2008 Michigan Basketball." It has become somewhat of a inside joke with myself as well as a subtle reminder, a signpost made of 100% pure cotton.

The shirt is nice. I wear it from time to time. I've gotten an admirable amount of mileage out of it. I hope to replace it very soon, to retire it to the dusty rafters of history, the closet corner where other infrequently worn shirts hang.

On April 3, 2007, Michigan announced it was hiring John Beilein to take over the basketball program. The road, paved with six years of incredulity, led to Atlanta all this time.

Michigan to play for first national championship since 1989