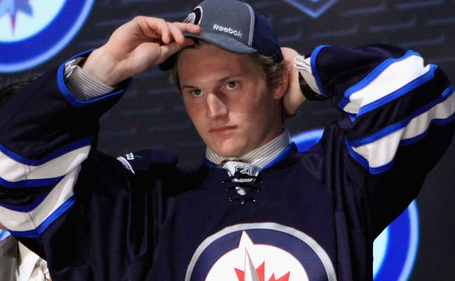 Twitter is ablaze with confirmed rumors (as ridiculous as that paradox is) that Freshman Defenseman Jacob Trouba will forgo his remaining eligibility and sign with the Winnipeg Jets.

But it was not to be.

<blockquote class="twitter-tweet"><p>Looks like my Michigan insiders, who felt Trouba was leaning towards staying, just watched him lean the other way and out the door</p>&mdash; Adam Wodon (@CHN_AdamWodon) <a href="https://twitter.com/CHN_AdamWodon/status/319212533288402944">April 2, 2013</a></blockquote>

That leaves Michigan's early departure list for this summer at 2, comprising of D's Jon Merrill and Trouba. This leaves a gaping hole on the blue line for the 2013-14 season. While Merrill's departure was expected, Trouba looked like he may have stick around. These two were the highest flight risks. It just so happens that Trouba would very likely have been a pre-season all-american and Hobey Baker candidate. So, this one burns a little. The Summer door is still open for more, but none as likely as those two. We've said it before, this is one of the risks of recruiting high end talent. They tend to want to challenge themselves at the highest level and it takes them less time to get there.

Hockey early departures are much less objectively sound than Basketball or Football departures. A hockey player need not declare for the draft early, providing some closure via an ESPN bottom line announcement. For those of you who are unfamiliar with the process, the NHL draft is unlike the other two major drafts. All hockey players who turn 17 before September 14 of the draft year are eligible for that year's draft. The NHL teams that draft their players "own" their rights. So, while the Winnipeg Jets and New Jersey Devils drafted Trouba and Merrill, respectively, they did not immediately have to sign with their NHL teams. They are allowed, and often encouraged, to develop with their major junior teams (Canadian) or remain in college until they are ready mentally and physically for a professional career. When they are ready is a topic up for interpretation, one which Red Berenson has been outspoken on in the past. This results in a difficult tug-of-war between college teams and the NHL organizations for high end prospects that can and often does result in conflicted decisions. Red is on record as saying that if a player is ready to leave Michigan for the NHL, he'd drive him to the airport. Only Jack Johnson has taken him up on it.

You cannot blame Trouba for realizing what I'm sure is a life-long dream in reaching the professional ranks. It would be selfish to deny him that right. We here at MnB wish Mr. Trouba a long, healthy, prosperous career. We'll no doubt be watching.

Edit: 2 minutes after publish, the Winnipeg Jets announced the signing on their official website.

The Winnipeg Jets announced today they have agreed to terms with defenseman Jacob Trouba on a new contract. As per club policy, terms of the agreement were not disclosed.