Your Friday Drinking Instructions Are Late

Don't let the weekend pass you by. Enjoy a fine beer or two with Maize n Brew.

Share All sharing options for: Your Friday Drinking Instructions Are Late

Another busy week to ward off the offseason blues. We had a Spring Game, some football news, and divisional realignment. That's not even mentioning the biggest news of the week the return of Messrs. McGary and Robinson makes Michigan basketball something to be excited about through the long boring summer.

The Red Wings are fighting for their playoff lives, interleague play is in full swing, and Tiger didn't win the Masters. The Champions League is still going, and for you cricket lovers, there's quite a test match season coming.

Seriously. Cricket? I'd rather watch an ethics seminar taught by Jim Tressel and Corey Tropp. At least it'd be funny. This weekend, to combat the spring blues, I'm headed to Baltimore, which means I'm drinking some Flying Dog this weekend. A quick Googling revealed my trip up last year netted me a fine review of Natty Bo - this is the coverage you crave. Hard-hitting news from reporters that just won't give up.

Today, I drudged deep into past MnB beer comments to find two beers I've just gotten around to writing about - Aventinus Weisse and Lancaster's Strawberry Wheat. Looks like it's going to be a wheat kind of afternoon. 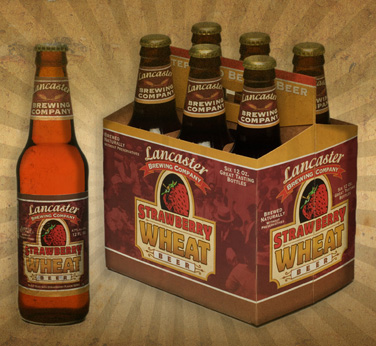 Took me a year to review this beer, but I'm happy I did. Lancaster Brewing's Strawberry Wheat stands out among fruity beers I've tried for being, well, not as over the top as others. I think I tried a strawberry wheat from Illinois once and reviewed it somewhere, but this one's better. It's also fairly available throughout the MIdwest, so you shouldn't have to go too far to find it - Meijer has been known to carry Lancaster stuff in Ohio and Michigan.

The secret here is the hops. Wheat beers either fall on the sweet side or the bitter side, and it's tough to balance them without tasting vinegary. Strawberries are a tough fruit to put in beer because they taste so different - for a good wheat, you have to find strawberries that aren't as ripe or sweet to get the hint of the flavor without the overpowering sugar. I think Lancaster has found a good balance here, as it's neither too sweet nor too bitter - the hops are really good. It's also a steal at $6.99 a six-pack, so take that, you haters. I can review beer other than 12-bucks-a-bottle whatever, but it's not nearly as fun. Thanks to Chris Grovich, formerly over at BSD (@scrappled) for the recommendation. Chris, next time I see you, beer's on me.

I've had a lot of people tell me to try Aventinus, and I've had a couple different offerings from them. MSUDersh told me to give this one a whirl, and I think I've had it before in Europe - I know Dave loves this beer too, so it's my fault for not getting around to it. 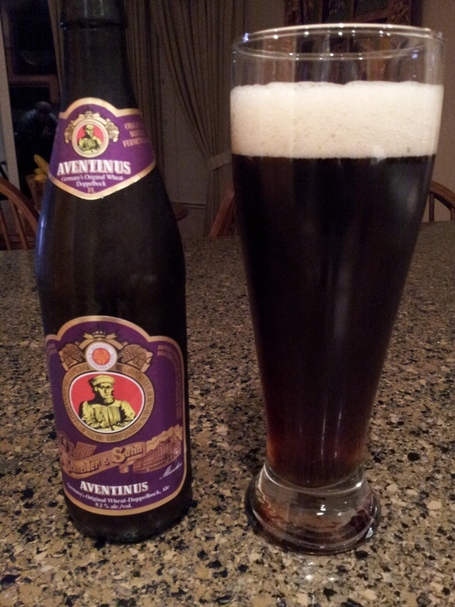 This is in fact a wheat beer. Double bocks are darker wheats, strong lagers top-fermented with added wheat. This is actually law in Germany, which is awesome.

I have no idea if Schneider has a website, but they have various weisses and bocks out there, and none compare to this. Everyone rates this sucker among the top beers in the world, and they're not wrong. It's not too much of anything, and I'd happily have it with a burger, a steak, some wings, or a cold one in a cooler in Michigan Stadium's parking lot. I don't care.

It's kind of reddish with some caramel and fruit notes to it, but then you taste a wheaty finish. This might be the only dark beer I'd want to drink this late in spring as the weather's getting warmer, and I'm glad I did.

Tonight, when I'm headed to Camden again, I'm excited to try the new batch of Underdog Atlantic Lager from Flying Dog, but $2 Natty Bos outside the stadium might be too good to pass up. I'm a sucker for Natty Bo. Next week I'll bring the prospectus on the latest Flying Dogs, and I might even get out to their brewery.

Enjoy your weekend and the fine weather, Michigan Faithful. Cheers!