FRR updates you on the very latest Michigan football recruiting rumblings. Which pass catchers did Michigan pull in this week? Could this class be the best in Michigan history? That and more.

The roster had a glaring hole at receiver, and the staff patched it up quickly. First came unanimous four-star receiver Drake Harris; three-star sleeper Maurice Ways followed not too far behind. It's apparent that the Detroit Country Day product feels at home in Ann Arbor: 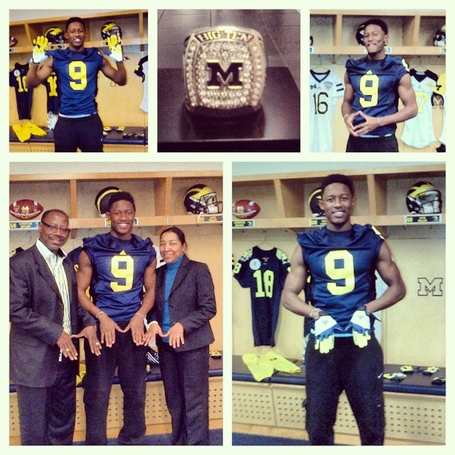 I'm glad that the staff offered Ways. He's a great kid, has an awesome attitude and hasn't even begun to scratch his potential. This offer could pay dividends down the line when Ways really learns the game of football.

Four-star tight end Ian Bunting also dropped in favor of the Wolverines this week. The 6'6" monster is a glorified receiver in high school, but he has the frame to become an all-around tight end at the next level. His tape shows a player with massive hands and a gloriously large catch radius:

Bunting will likely rise in the rankings if he stays healthy throughout his senior season. He's one of the best pass-catching tight ends in this class and has the potential to play on Sundays.

I'll have more thorough breakdowns of these two up tomorrow morning in the form of New Blue posts. For now, check out Ways' 2014 profile and watch the tape of Bunting a few more times.

This gets thrown around every year but I really think this class could end up being the best in program history. Michigan has been a top-ten school in terms of recruiting for quite some time now, but classes with multiple five-star players backed by countless four-star players have been hard to come by. Michigan's national class rankings in recent years, according to Rivals:

Michigan has been in the top three spots momentarily, only to be uprooted by teams like USC and Alabama toward the end of the cycle. This year might be different, thanks in large part to these players:

Michigan is a legitimate contender for most of these players, and this is only the short list of players in the top 100. Michigan leads for Peppers, McDowell, is solidly entrenched in the top group with Hand, Nicholson, Bars and Scott, and could very well climb for players like Brown and Mixon.

Overall, multiple five-star commitments and thirteen or more four-star commitments would make this class one of the best in the history of the program, if not the best ever. Michigan hasn't ever taken the top overall player, so landing Hand would probably put this class toward the top by default. The fact that Michigan will only have 18-20 scholarships could hold it back from reaching the top three nationally, but this class could be the best ever in terms of quality. Could.

The staff has been all over the country:

Four-star (and potential five-star) corner Jalen Tabor was in Ann Arbor this past week. He looks good in the maize and blue: 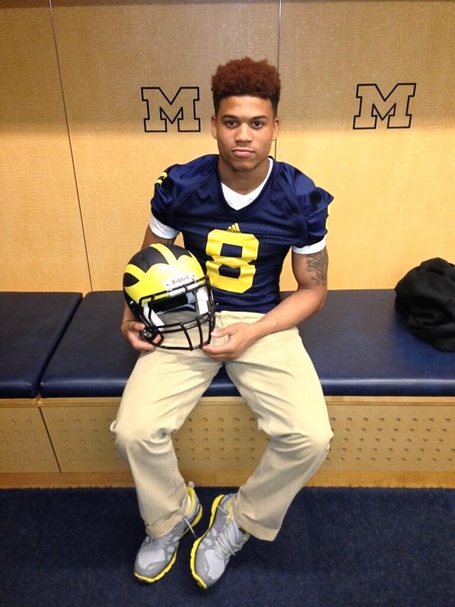 The staff impressed Tabor but there's a long way to go in his recruitment. There might not be a long way to go for fellow four-star corner Parrker Westphal, who got to don the Michigan uniform as well: 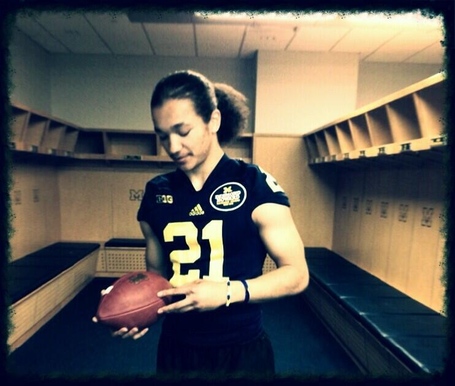 Someone get that kid a Heisman trophy.

Five-star cornerback Jabrill Peppers will probably know where he wants to go to school after he visits Stanford, according to ESPN. Translation: he'll know if Stanford can live up to Michigan or not.

Michigan is getting bigger on all fronts:

@tomvh it's a title I'm not used to

So big that 6'3" outside linebacker Michael Ferns is the shortest of Michigan's seven commitments. More from Tom on Michigan's ESPN rankings:

Ferns has been invited to the Under Armour All-American Game. I believe that gives Michigan five players with invitations to the UA game.

"It was great," DeBerry said. "I got to talk with Coach Hoke and I got to talk with Coach Manning. (Manning) is a great guy. You can tell that his heart and soul is at Michigan. He'll do anything for Michigan. He played at Michigan. He loves it. He'd rather be no other place. He told us about the academics, he told us about the football, and he was like, 'Who wouldn't want to play in the biggest stadium in the whole country?' He is just so passionate about the game and about Michigan. He really wants to help Michigan win another national championship and he loves the coaching staff and coach Hoke."

Michigan is in solid position with the future four-star, and Manning is much of the reason why.

Finally, check out Artavis Scott's highlights from an IMG 7-on-7 tournament:

He looks improved when it comes to route running and looking the ball in. He's also still extremely quick.

I apologize for the late post today. Two upper-level mathematics exams took the wind out of me today. Also, please leave any and all questions in the comments: I'm here to answer your recruiting questions.