Who is Maurice Ways? Come read our piece and check out our ridiculous comparison!

MI WR Maurice Ways, listed at 6'3, 190ish, committed to Michigan earlier this week. He becomes the 7th commitment in the class (8th if you count Brady Pallante), and the 2nd WR, joining Drake Harris. This commitment was thought to be somewhat inevitable ever since Ways received his offer in April, as Michigan was thought to be his dream school. On Thursday, he affirmed just that.

Ways' recruitment story isn't much of a story. Despite coming from a relatively high profile school (Detroit Country Day), Moe's only offers came from Iowa, Kansas, Rutgers and MAC schools. Although the plot thickened a bit when Rutgers secured a commitment from his QB, Tyler Wiegers, and then offered him, he always seemed to have Michigan on his mind, the question was simply when the offer would come through. 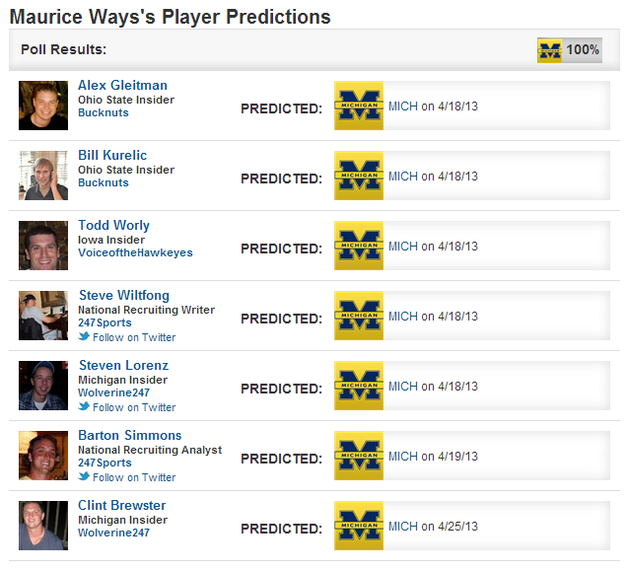 And although that offer took a bit of time to come through, it seemed inevitable to me after listening to WR Coach Hecklinski discuss what he values in his players during the NSD Press Conference in February.

In my mind, Moe Ways looks like C'sonte York with more athleticism. His strength doesn't like in his running or cutting ability, and he isn't a huge threat after the catch, either. But what he lacks there, he makes up for in size, body control, and catching radius. While some have called out his hands as inconsistent, he is more than capable of at least putting them in a position to make a play. He even shows an unusual penchant for making over the shoulder catches, although I guess that's not a problem most high schoolers have to deal with on long balls, since most high schoolers don't have D1 quarterbacks chucking it long enough for them to be able to catch it in stride.

This evaluation isn't without concerns, though. As I mentioned above, he's not the fastest or quickest, but I don't think that'll be a problem for him as it may be for his 2013 brethren. My concern lies in a lot of what we don't see on the highlight tape, predominantly his hands. While that's something kids can obviously work on, it's generally not something you see change with time. When a kid has problems with the dropsies, it's a mental thing that's liable to creep into their head at the most dangerous of times. Additionally, I don't like how we essentially are only seeing him run fly routes in his highlight film. I have absolutely no idea how good this kid's route running or understanding of a route-tree is. What I do see, though, is hip stiffness on occasion. On top of that all, I think he'll have quite a time adjusting from a weak high school competition with an elite QB throwing you the ball...to college.

But what is that adjustment going to entail? Well, it's starting to seem like it could be some time on the bench. Although Michigan will be tasked with replacing Gallon, Dileo, Reynolds, and Jackson next fall, there are others who will have a big step up on Ways. I have to imagine both Chesson and Darboh will have locked down starting roles or niches in the offense by that point. The incoming freshman (Dukes, York, and Jones) will all have had a shot at staking a claim. Even if those guys don't all pan out, Ways is going to have to beat out fellow freshman superstar Drake Harris for playing time. Harris, by the way, plans to enroll early.

So Ways looks like the type of kid who likely won't emerge until his upperclassmen years, which is good for all parties involved. Because when he does come up, he could be....well I don't want to say Braylon. But his ceiling isn't all that much lower.