Michigan recently added a new tight end commit. When does he see the field, and is he better than Devin Funchess?

IL TE Ian Bunting, listed at 6'7, 215ish, committed to Michigan this past Tuesday, setting off a chain reaction that sent Daniel Helm to Tennessee and Nic Weishar to Notre Dame. Bunting became the sixth commitment in the 2014 class and the first (and likely last) tight end.

For the longest time, most had believed Bunting to be headed to South Bend. As of Tuesday morning, 100% of the 247 analysts weighing in concurred (although Wiltfong changed it a bit before Bunting dropped). 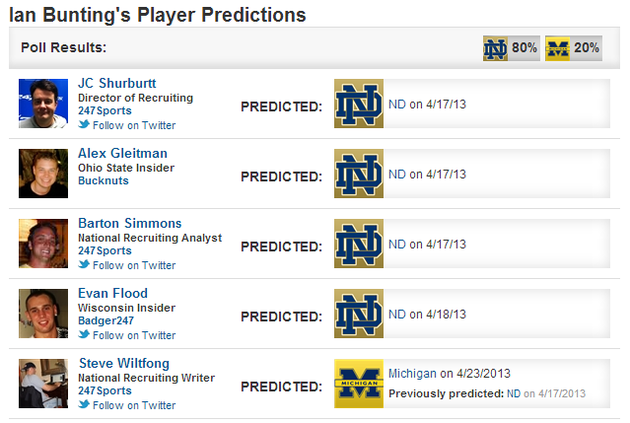 He visited Notre Dame several times before his visit to Michigan this past weekend (his first since the football season), and many believed his new list of top schools following his recent spree of trips would feature the Fighting Irish on top. Then, he committed to Michigan. His other offers featured USC, Oregon, Ohio State (thought to round out his top 5), as well as Oklahoma, Florida, Arkansas, UNC, Va Tech, and others.

So with that kind of offer list, why did the likes of Scout and Rivals only consider Bunting a middling 3* TE? I think there are a few critical factors in that, the most obvious of which is weight. Although most coaches have insisted they want Bunting to play some kind of hybrid position, ranking sites need some kind of clear classification system to make their systems...systematic. While 215 isn't that bad of a weight for a high school TE, he had reportedly been sitting around 190 for a while. Additionally, Bunting only played four games of his junior season due to an ankle sprain, so highlights of the star are limited and based more off of camp settings.

But with all that in mind, what kind of player is Bunting? I know people assume that since he's headed for the Tight End position from WR, he's probably slow...but that's actually not the case. In comparison, I think he's probably actually faster than some receiver recruits Michigan has pursued in recent years like Jeremy Jackson, Shawn Conway, and Ricardo Miller. He's also shows competent route running ability, quality body control, and a great catching radius. Last year we all said Jake Butt could be Devin Funchess 2.0, I actually believe Bunting could be Devin Funchess++.

Of course, like Funchess, he's essentially a WR right now and is far away from being the blocker he needs to be. He doesn't really play low, usually just tries to go for the big hit instead of a block, and is also (duh) way undersized. Can Michigan get away with continually recruiting TEs that are far, far away from the blockers they need to be? Or can they develop into competent assets on big packages as they do for teams like Stanford? So far, the answer to that question has been a bit sketchy. Brandon Moore actually seemed to regress (although he never grew up under the previous administration either), and neither Funchess nor Williams looked much better blocking in the spring than in the fall. More time is needed, though.

With Funchess and Williams in mind, what is Bunting's path to playing time going to look like? Well, the primary competition will come from Butt and Funchess, who are (unfortunately for Bunting), both older and more experienced. He'll likely redshirt next year (Funchess' JR year, Butt's....SO year?) and then sit behind the two for another season as Funchess finishes out his career. After Funchess goes, he and Butt will lobby for, or more likely share, his touches. If Michigan really wants the offense to look like Stanford's in a few years, then based on the way the staff's been recruiting, we could be pumping out 2 TEs a year to the NFL, like Stanford did this year.

That level of productivity is actually a bit scary. Last year in the 2012 draft, Stanford sent Coby Fleener to the Colts with the 34th pick overall. Then, just this past Friday, they sent Zach Ertz to the Eagles with the 35th overall pick. On top of that, Levine Toilololo was taken with the 133rd pick overall earlier this year. Can they keep that up? Only time will tell. But if Michigan can garner a fraction of that success, it would be with this trio of ends.

So that's about it. Bunting's not going to be an early contributor, but with weight and technique, an NFL future isn't out of the question