MRR updates you on the very latest Michigan football recruiting rumblings. Which running back fell off of Michigan's board? How long will it be until the Wolverines land another commitment? That and more.

DE Lawrence Marshall (Southfield, MI/Southfield): Marshall was the headliner and for the most part performed as such. He continues to build himself up and has become a potentially lethal combination of size and speed. He still can occasionally struggle against bigger defenders a bit, but still usually gets to the tackling dummy without much of an issue.

Lawrence shows great burst off of the line before putting maize and blue hands up:

Lawrence is truly capable of playing the rush end spot and the SAM linebacker position, which is why I believe the staff will continue to recruit him until the end. His combination of explosion and length make him a very valuable recruit.

Michigan is a hot name in the recruitment of consensus five-star cornerback Jabrill Peppers right now. It looks like the staff may be doing enough to get Peppers to pull the trigger earlier than expected:

I May Verbal sooner than expected 😎

Peppers spoke on ESPN radio about his recruitment, mentioning that he will go out to Stanford in July and take two official visits to his top two schools only: Michigan and Stanford are miles ahead of the pack here, and I think he'll be committed to Michigan before his senior season if Stanford doesn't blow him away in July. He won't be taking official visits during his senior season, so if he makes a choice in the summer it will almost certainly be in favor of Michigan or Stanford.

Linebacker recruit Kyron Watson knows he and Peppers could team up at Michigan:

Watson will be on commitment watch when he visits, which will be in May:

My Official Unofficial Date To Visit Michigan Is May 20...So Excited Man #GoBlue#WolverineNation

Kyron could be the last linebacker taken in this class. It will be interesting to see if the staff continues to pursue SAM prospects like Chase Winovich if Watson drops in favor of the Wolverines, or if they think a pledge from Michael Ferns is enough. Winovich now holds an offer from Ohio State, so that situation might not even be possible.

Following one of the deepest stops in the Rivals Camp Series presented by Under Armour, two more players were invited to the circuit-ending Rivals100 Five-Star Challenge.

Four-star players Montae Nicholson and Michael Ferns both played their way into the event following solid performances in Pittsburgh.

Nicholson is ranked as the No. 47 player in the country and is listed as an athlete. It is a spot that Rivals.com national analyst Mike Farrell feels good at leaving him until further notice.

"He is so versatile and can play offense or defense at the college level," Farrell said. "He is at a great program at [Monroeville (Pa.)] Gateway and I know he has been well-coached. Moreover he is a competitive kid, which we like to see."

Ferns entered the camp as the No. 84 player in the Rivals100 and No. 7 inside linebacker in the country.

Farrell said that at 6-foot-3 and 235 pounds, his size is ideal for his position.

"He is the stereotypical Big Ten linebacker," Farrell said. "He is explosive to the football and takes great angles. He is hard-nosed and physically impressive. He is exactly what you expect when you think of a major prospect from this area at that position."

The pair will join the 54 players already invited to the elite camp from the camp series and will be among 100 of the best players in the country.

Ferns could end up being a consensus top-100 player when all is said and done, especially if he shows well in his All-American game. Nicholson has been relatively quiet about his recruitment.

Five-star running back Elijah Hood has committed to Notre Dame. This doesn't come as a surprise. I'm interested to see if Michigan can get in on another elite running back after landing five-star talent Derrick Green last year.

Make sure to check out our New Blue posts for Ian Bunting and Maurice Ways. DGDestroys tends to knock these out of the park.

Speaking of Ian Bunting, here's a picture of him while he was in Ann Arbor: 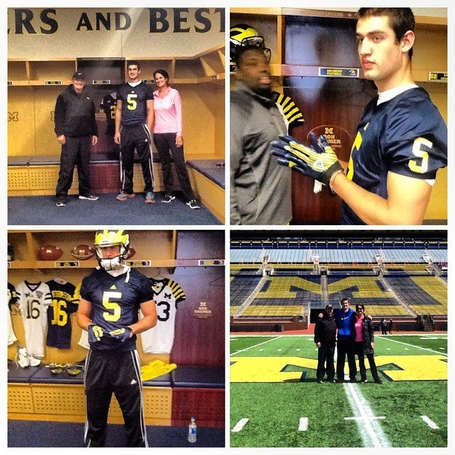 His hands shouldn't even be called hands. Let's instead refer to them as paws, because at least then we're acknowledging the fact that his hands aren't actually human hands.

I'm not talking to anymore coach's I'm happy with the decision I made, and nothing is going to change my mind #GoBlue

Sorry to anyone looking for an elite receiver.

Once again, feel free to leave any questions regarding Michigan football recruiting in the comments.