FRR updates you on the very latest Michigan football recruiting rumblings. How did a few prospects' visits go, and who will be on campus this weekend? Which prospect took the top spot in MnB's big board? That and more.

Share All sharing options for: Friday Recruiting Roundup Is Hilarious

Both five-star cornerback Jabrill Peppers and four-star offensive lineman Juwann Bushell-Beatty made it to campus this week, and the visit seemed to have gone very well. Peppers visited with the coaching staff, tried on a Michigan jersey and helmet, held the Heisman Trophy and met up with a familiar face: 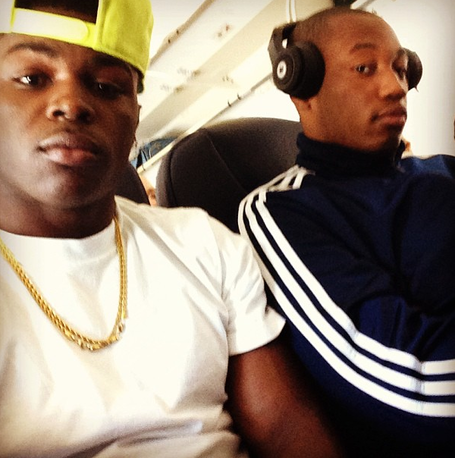 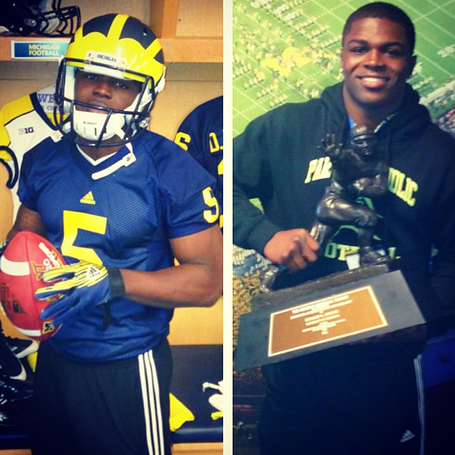 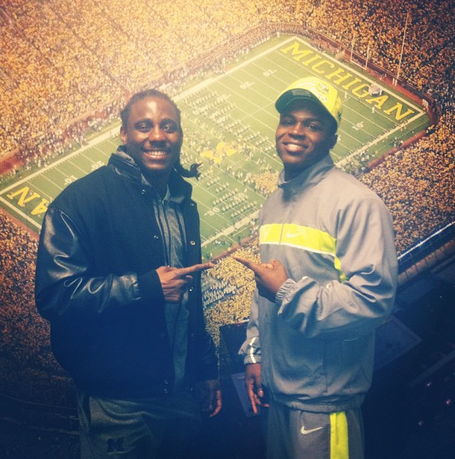 I'd call that a solid visit. The young man sitting next to him in the first picture is Bushell-Beatty. Things between Peppers and Michigan are definitely heating up, but he still has visits to Stanford, Alabama and others standing between him and a decision, which may not come for months.

Four-star offensive lineman Jamarco Jones was also on campus as well. He thought a particular lineman was quite comical:

Touch the Banner runs through this week's visitors. Maurice Ways will be in town on Saturday, and I suspect that Michigan is strengthening their relationship now because they've realized that he's close to blowing up. I'll have a visit reaction from Ways after the weekend.

Some have speculated that Notre Dame was leading for Michigan defensive end prospect Malik McDowell. Writers at 247 Sports now believe that Michigan is back in driver's seat. McDowell is playing things close to the vest, so we may not know who the true favorite is until he commits.

Our very own DGDestroys put together a Big Board of Michigan recruits, ranking the top ten most important prospects in the class of 2014. Malik McDowell takes the top spot, with Drake Harris and others following behind. Check it out to see the other eight players who made the board.

Outside linebacker prospect Sam Hubbard was committed to Notre Dame for lacrosse. He has since blown up on the football recruiting trail, receiving offers from Michigan, Ohio State and Stanford. The offers lead to Hubbard decommitting from Notre Dame lacrosse in order to decide on a football program instead.

Detroit Cass Tech has a pair of freshman studs on their offensive line who could end up playing BCS-level football. One of those two players is Michael Onwenu, who's already developing a relationship with Michigan:

Onwenu played a significant role in Cass Tech's run towards a state championship this season, starting in three playoff games and making an impact on the interior of the defensive line. This season, he along with junior-to-be Joshua Alabi will anchor one of the top defenses in the state. As you'd expect, the Michigan coaches have taken note and invited him to campus.

"I talked to Coach Hoke for a little bit," Onwenu said. "They're already watching me and I couldn't be more excited about it. I had a really great time at practice. I loved coming up there. If I had the time this week, I'd come up again for sure. To be honest, it already started to feel like a home to me. I had talked to Coach Hoke before, but had never seen the facilities and stuff for me. It was a once-in-a-lifetime experience."

Quarterback Shane Morris is well aware of the injury to Russell Bellomy, and it sounds like he's embracing the challenge:

Time to step it up

Time to step up, indeed. He'll go toe-to-toe with a walk-on for the backup job in Ann Arbor. A redshirt for Morris would have been gladly accepted, but that option probably went down with Bellomy's knee.

Five-star defensive lineman Andrew Brown might be close to a decision:

Closing in on my college decision day by day.

I haven't heard much about Brown and Michigan, but he does hold an offer from the Wolverines. 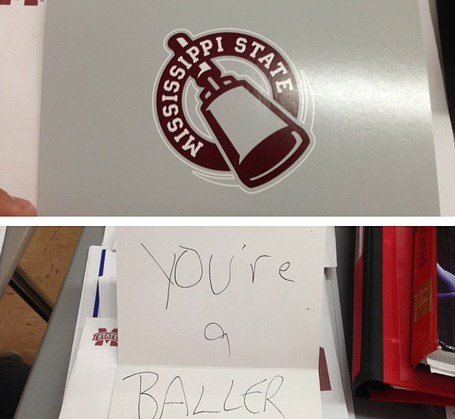 All joking aside, that's a terrible letter. Maybe put slightly more effort in next time you're trying to convince Michael Ferns that he should put you in control of the next four years of his life.