What does the Florida Nose Tackle bring to Michigan's roster?

Brady Pallante, listed at 6'1, 270ish, committed to Michigan yesterday on a greyshirt offer. Pallante selected this method rather than a full ride at Appalachian State. For those of you who do not know what a greyshirt is, TomVH is here to help (from an article about Jeremy Clark).

To those that aren't familiar, a greyshirt would mean Jeremy [Brady] would commit to Michigan and pay his way through school, likely only for a semester. Once the semester is up he would then be able to earn a scholarship, the greyshirt preserves his eligibility while not counting towards the 2012 [2014] class numbers.

The benefit of Pallante accepting this deal is that the coaches can pursue other high ceiling defensive tackles throughout the recruiting cycle. If none end up at Michigan, they can offer a full ride to Pallante, as they did with Clark. While this list might grow, the prospects Michigan is pursuing right now comes down to 5 uncommitted guys, 2 of whom (Andrew Brown, Dexter Wideman) seem to have legitimate interest in Ann Arbor. That's not to say they're not long shots, but there's a chance.

As a greyshirt candidate, Pallante represents excellent value. While comparisons to Mike Martin are a bit generous (i.e. he's not a quick twitch...muscle hamster), film of the two is similar from a technical standpoint. Pallante plays with excellent leverage, while keeping his eyes up and showing great situational awareness. He's fairly quick and light on his feet, although I'm not completely sold that he'll be able to get up to 290-300 and keep that.

As far as limiting factors go, well, he really isn't that quick or explosive. Aside from the 'obvious things are obvious' category, I also think his arms are fairly short (which may be more a reflection of his size being overstated), which could hurt him while he's trying to get in the pads of opposing linemen.

Adding Pallante shows the staff's re-emphasis on the state of Florida, something that hasn't been there since Rodriguez left the head job. The below graph shows what percentage of offers have gone out to Florida kids over the past 6 recruiting cycles. You'll notice the sharp dip when the Rodriguez-Hoke transfer takes place. 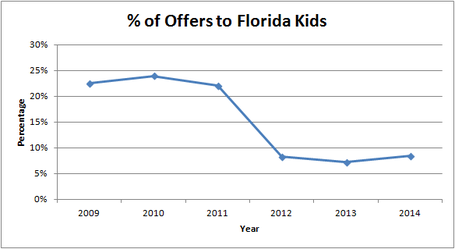 Data via Touch The Banner

This recruiting cycle has not only seen a slight uptick in that percentage over the past two years, we've also seen more interest from the targetted prospects. For example, of the 9 offered kids, 2 are commits and 3 (Artavis Scott, Corey Holmes, Javon Harrison) have had Michigan in their top group at some point. When you look to the 2015 cycle, both George Campbell and Jacques Patrick have expressed serious interest in the Wolverines. This is all part of a concerted effort on behalf of the coaching staff to reclaim some of the ties from Mattison's days in Florida. Is this a trend that's likely to grow? I think it is.

Projecting Pallante's role down the line is a bit of a crapshoot, because Michigan has a lot of highly touted young guys at the nose right now. He'll have to compete with fellow commit Bryan Mone, 2013 signee Maurice Hurst, and freshman (sophomore) Ondre Pipkins for playing time once Pallante joins the team. While I don't think he'll be beating any of these guys out for a starting role, he could certainly become a solid rotational player in the mold of someone like Keith Heitzman (who, by the way, is probably still ahead of Wormley on the depth chart for now).

In conclusion, we're not getting a high ceiling project, quite the opposite. Pallante won't be mauling Purdue's O-line Mike Martin style, but he could be doing the little things most people don't notice to free up the linebackers, pressure the quarterback, and close gaps. Accepting the greyshirt is also a sign that the kid truly buys into the Michigan program, enough to pay out of state tuition for a semester/year to prove it.

2014 DT Brady Pallante explains why he committed to Michigan