Recruiting is a very, very tough business. That is why Michigan coach Brady Hoke decided to join the current trend in recruiting: send handwritten Sharpie letters.

The Michigan football team is in dire need of a backup quarterback after sophomore Russell Bellomy tore his ACL in spring practice last week.

NC State started a trend when it sent a recruit a handwritten letter in Sharpie regarding the Wolfpack’s current need for ballers last month.

Not to be outdone, Mississippi State’s Dan Mullen caught wind of this recruiting tactic and fired off two Sharpie letters of his own. In Mullen’s first letter, he wasted 46 cents to simply tell a prospect , "YOU’RE A BALLER." Mullen then drew a can of SWAG (the "Drink of Champions" for those who are unaware) and snail mailed that off to a 17-year-old kid.

Enter Michigan into this game.

Tobias Etheron, a 6-foot-3, 203-pound quarterback from Napa High (Napa, Calif.) in the 2014 recruiting cycle, tweeted out a pic Saturday of the handwritten letter he got from Hoke earlier this week. 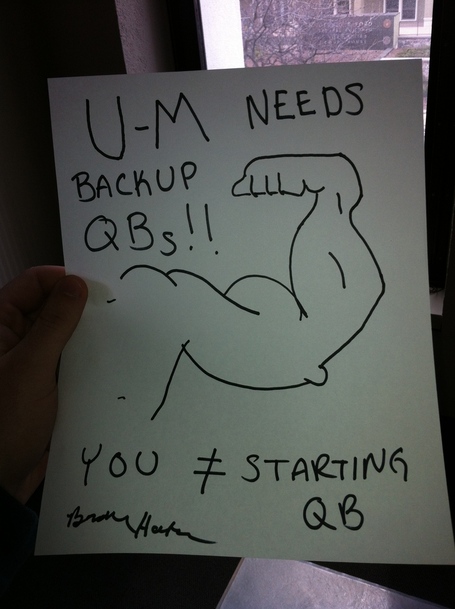 Hoke has clearly identified who he wants as his backup quarterback this fall. Someone should tell Hoke that a 2014 recruit does not fix his current need for a backup in 2013.