MRR updates you on the very latest Michigan football recruiting rumblings. Which four-star receiver now has Michigan at the top of his list? What does Florida defensive tackle Brady Pallante bring to the roster? That and more.

Michigan Moves Up For Two Studs

Four-star wide receiver K.J. Williams visited Michigan this past weekend. He was impressed:

Michigan is by far my top school now!! #BlewMyMind

Furthermore, the Michigan staff seems to have made the strongest impression of any staff on consensus five-star cornerback Jabrill Peppers:

"The coaching staff is very down to earth," said the 6-foot-1, 210-pound Peppers. "They are very cool, laid-back people but when it's time to work, it is time to work. They coach those players hard, which I love. The main thing I liked about them was that they reminded me of my coaches right now.

He also dropped this golden quote when asked about the players:

"The players are as real as they get," said the Paramus (N.J.) Paramus Catholic product. "They like to keep it what I call '100,' completely honest. They answered all my questions with compete honesty and that's all you can ask for. They weren't selling me a dream or anything like that."

So that Michigan staff and players keep it real. Michigan might be in the lead here:

There's still a ways to go in Peppers' recruitment, but Michigan has put itself solidly in the mix with Stanford, Ohio State and LSU at the top of Jarbill's list.

Florida defensive tackle Brady Pallante has committed to Michigan, becoming the first member of the Wolverines' class of 2015. His offer is a greyshirt offer, meaning that he'll graduate from high school this year then attend the University for at least one semester before joining the football team. 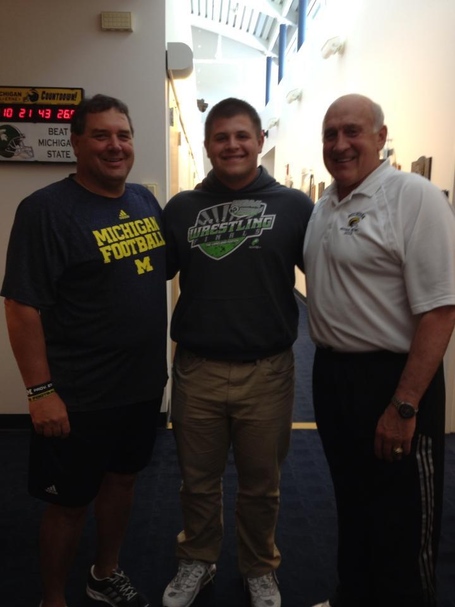 Pallante is an Ohio native, originally hailing from Youngstown, Ohio before moving down to Florida. He has garnered comparisons to former Michigan defensive tackle Mike Martin, not only because of his position, but because of his ability on the wrestling mat. In February (the day after he was offered by Michigan), he won the 2A State Championship in Florida and is considered to be one of the better high school wrestlers in the country.

Pallante isn't physically imposing by any means, but the fact that he's such a strong wrestler makes me think that he could be a solid technician on the defensive line.

Florida receiver Artavis Scott will be at the spring game with current Michigan commit Mason Cole. More names will pop up during the week.

Outside linebacker Sam Hubbard has committed to Ohio State. Hubbard quickly blew up on the football scene, decommitted from Notre Dame lacrosse, then quickly flipped over to the Buckeyes. This should make it easier for Michigan to convince Kyle Berger to come to Ann Arbor, but I think that Hubbard has a much higher upside.

Four-star linebacker Dwight Williams will be taking an official visit to Michigan:

I will be taking official visits to #Florida and #Michigan the other three are in the air. #Gators #Wolverines

Williams lives in California; the fact that his top two schools are Florida and Michigan is interesting.

Ohio State has extended an offer to 2015 Detroit Cass Tech running back Michael Weber. I think Weber ends up being a fringe three to four-star prospect.