Based on the steady improvement we're seeing from Kill's group, one would expect a similar rise in recruiting efforts. Does this class reflect that?

Here we are, the cellar of the Big Ten's recruiting efforts. If you listen closely through the ventilation ducts you can hear Michigan and Ohio State battling for the remote in the attic. Over in the corner you can hear the hydraulics pumping as the Illini and Hoosiers slowly move up and up the elevator. The most taunting sound may come from Purdue fans at the top of the stairs, enjoying their place at the top of the bottom. But alas, poor Goldie sits in a corner, quietly weeping, accepting the futility of---wait, what?

What are your overall thoughts on this signing class?

Jeffrick: Well being that I'm addicted to Kill-Aid, so obviously I love it. Thought they addressed some need areas well like LB, DL, RB, QB, and WR. The only thing they seemed to miss on was corner, but they should still be ok there at least for this year. SOME people might point at the low overall class rating as an issue, but come on- these coaches have been doing this for a dozen years or more, and know what they're looking for.

JDMill: As per usual, while everyone who doesn't pay attention to Gopher football thinks the sky is still falling, I'm feeling pretty good about this class.

In exactly 97% of fan forums for teams with a poorly rated recruiting class, star rankings are met with hostility or dismissive attitudes. It's only natural that such behavior comes about; after all, National Signing Day is a net positive for just about every team in the country. New players represent new opportunities, and before they even step on the field, performance can be wildly unpredictable. So what is the verdict? Are the Gophers simply catching a whiff of Canadian optimism floating across the border? Or is the hope validated by an under-appreciated class?

When evaluating a class, I think it's critical to first detail the situation a coach finds himself in. When adjusted for on field performance, Indiana and Illinois have classes that are nothing short of spectacular. So what did Minnesota have?

When you look at this class, you're probably somewhat surprised. However, Kill turned a 3-9 freshman year into bowl eligibility and a narrow loss to Texas Tech in the Meineke Car Care Bowl this past year. In my eyes, that should generate a lot of hope for prospects. In addition, despite losing some talented DBs and LBs, most of the starters on this team are both young and returning. Outside of losing instate ATH James Onwualu to Notre Dame, however, there were only really 2 losses that hurt.

AL DB Nate Andrews verballed to the Gophers after his November official visit, and seemed destined to become the jewel of the class. Everything changed when Alabama assistant Jeremy Pruitt joined the Florida State staff and decided to bring Andrews with him.

Everything changed once Pruitt became the defensive coordinator at FSU. Andrews immediately set up an official visit and was blown away on that trip and the rest was history from there, as his relationship with Pruitt was just too much to overcome.

Andrews took his official visit to Florida State with his mother last weekend. What really struck him was how comfortable he felt the players, atmosphere and the type of system Pruitt had with his defensive backs, and how Andrews could make an impact as a free safety.

The other player, although never a verbal to the Gophers, was close to committing until the hometown team stepped in. In this case, that team was the LSU Tigers. And the player in question, Duke Riley, happened to attend John Curtis, a school that regularly pumps talent to Baton Rouge. This is like Delano Hill getting offered by Michigan; there's not much Kill could do to stop it.

Other than those two misses, however, this was a stable class that finished strong. Perhaps the biggest victory of all came in the form of JUCO LB De'Vondre Campbell, who chose Minnesota over Kansas State, Tennessee, Texas, and TCU. Campbell's a big-time talent at a position that desperately needed depth. In addition to Campbell, Kill and his staff added offensive weapons in TE Nate Wozniak and WR Drew Wolitarsky in the last few days of the recruiting cycle, as well as QB Donovahn Jones, an athlete swiped from Mizzou with promises of getting a chance under center.

LB Damien Wilson. Wilson doesn't look like a very reactive player, but there will be a major need at the MIKE linebacker spot that he was brought in to fill. Spring practice reports have him firmly in the mix, especially after a good showing in the Spring Game.

Wilson in particular has those Mike LB superlatives you look for, though his top end and sideline-to-sideline speed is only average. One thing I noticed with Wilson is how aggressive and physical he is when he takes on blockers; when he engages linemen in the gaps, he "fits" in the middle of the lane which forces a back to either side rather than straight through.

LB De'Vondre Campbell. Like Wilson, his film makes him look more like an athlete forced into the linebacker position than anything else. With his relatively raw ability and underdeveloped frame, you wish he could have time to develop. Unfortunately, he'll be thrown right to the dogs at the unoccupied OLB position next to Wilson.

The longest run from scrimmage last year by someone not wearing #5 was Donnell Kirkwood at just 38 yards. Next non-QB after that was Roderick Williams Jr...at 17 yards. Donnell and Roderick are quality B1G backs who are built to run over defenders, not past them. Hopefully Berkley gives this rushing offense the home-run threat it's been missing.

If he runs for over 50 yards against Michigan, I guarantee at least 30 threads throughout the interwebs with ANGAR in their hearts.

QB Donovahn Jones. The late steal from Mizzou was lured with promises of playing under center, his high school position. In this way, he reminds me of a more electric Philip Nelson; good athlete with questionable arm strength. Still, the Gophers have shown that they're (A) comfortable throwing freshmen on the field at the QB position and (B) more than willing to use multiple QBs. Jones needs to develop as a passer, but he's got that SEC SPEED YA'LL.

DT Jordan Hinojosa. Hinojosa had to divert to a year of JUCO before becoming a Gopher, but he actually originally signed with Minnesota with the 2012 class. Hinojosa is another player that had a positive spring, and could get time in the rotation at DL as a result.

DB Daletavius McGhee. Daletavius (!!) reminds me a bit of Channing Stribling; he's a long athlete lacking quick twitch explosiveness from SEC country, who could end up well out-performing his ranking. Like Stribling, McGhee tosses his lanky frame around with reckless abandon, while still showing excellent body control. I don't think he'll ever be elite, but he should be fun to watch.

OL Alex Mayes. Mayes is sort of in the same boat. I don't think he'll be elite, but he looks like a quality run-blocking tackle. He even seems to have a good understanding of leverage for a high schooler, although you'd like to see him bend more at the knees than at the waist. Still, the run first offense at Minnesota could definitely use Mayes in a few years.

LB De'Niro Laster. Going along with the theme of linebackers more athletic than they are quality linebackers, Laster has a lot to learn about the position. In all honesty, his development may take 2-3 years depending on how quickly he can pick it up. However, he does already have a more college-ready frame than De'Vondre Campbell, and the athleticism should help him in the long run.

WR Drew Wolitarsky. Wolitarsky isn't flashy, and his competition looks pretty bad, but he seems like he'll be a consistent option on the offense. I wouldn't expect an NFL career out of him, but a solid collegiate one seems likely.

This is the lowest rated class in the B1G, so I hope you're not expecting much.

Berkley Edwards, Minnesota's highest rated commit, would have been Michigan's 24th best player (by 247 average), barely edging out TE Khalid Hill. Perhaps most staggering is the fact that, if you take out Sypniewski, the lowest player in Michigan's class is rated higher than 91% of Minnesota's.

Another stat I find interesting (and you'll see it later in the pie chart) is the regional diversity of this class. Only 13% of this class comes from Minnesota, and the remaining 20 hail from 10 other states. There are players in this class from Florida, Georgia, Texas, Mississippi, California, Wisconsin, and nearly Alabama and Louisiana as well. You're obviously forced to branch out when your state isn't regularly producing talent, but the reach is everywhere. Soon, Kill will be challenging Dantonio for the likes of '16 Mars (Mars) OT Z'sgliknov Blurtrodlrike. To infinity, and beyond!

--> No one in this class held a Michigan offer, although that would have changed if Braylon were in charge (along with a frightening array of other thing I don't want to imagine). When it was clear the Wolverines weren't interested, Braylon took to twitter, saying "I don't understand how my brother has the eighth (fastest) time in the country in the 60m, ran for 1,800 yards last year and 20 and UofM wont call". The 'slight' by Michigan has apparently planted a chip on Berkley's shoulder, as well.

"All these years, he was saying (I'm) the next one, and that I would be going to Michigan. So it was just a big shock."

"Those will be two big games," Edwards said. "I want to definitely prove to (the Wolverines) that at least they should have offered me. But things happen, and it is what it is."

--> LB De'Niro Laster was also very interested in the Wolverines. He visited with Ross Douglass, and someone close to the situation told me that had the Wolverines offered, Laster was chomping at the bit to come to Ann Arbor. Yes, I wish Daletavious was coming to Michigan as much as you do, and no, this is not the last you'll hear of it from me.

--> The Gophers are off to a hot start in the 2014 cycle, especially by landing in-state RB Jeff Jones, currently one of the highest rated commits to the B1G. They also nabbed KS ATH Dimonic McKinzy from B1G foes Nebraska and Iowa. Could this be the year that on-field momentum translates to recruiting success? We'll see, but keeping Jones in the fold will likely be priority number 1 throughout. 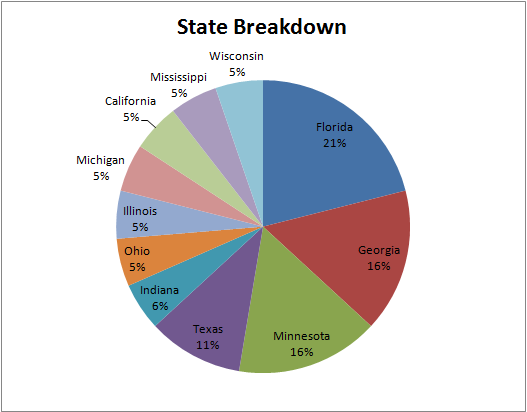 I'm trying to keep these posts upbeat, as recruiting classes are inherently optimistic things, you see. When I see these players, I don't see a lot of guys that seem to really be able to shake things up. However, Kill has proven that with his right system guys, he's capable of winning ball games. Are these the right guys? For Minnesota's sake, I sure hope so.