Inside the Playbook - Roll Outs and Sprint Outs - Part III

We've seen the basics that go with the roll outs and sprint outs that Borges and Co. will throw out there. But what happens when the defense adjusts? What is the counter for the counter punch? Today, we will look at how to expose defenses that become overly aggressive on the front end of the play.

Share All sharing options for: Inside the Playbook - Roll Outs and Sprint Outs - Part III

Introduction
So this whole sprint/roll out series seems pretty unstoppable now, right? Lots of easy passes, picking on certain defenders to give simple reads, and threatening the edge with the legs if that doesn't work out. Well the defense tends to make adjustments if you beat them one too many times with certain aspect of the game. But to strengthen one area, defenses must typically put their defenses down elsewhere (there's got to be a Sun Tzu quote for this). How will Al Borges make the other team pay?

Personnel/Formation Key
Some defenses may think they are being tipped off by a certain formation or personnel key. You'll notice in the previous parts I typically used very similar personnel, typically two WRs along with a RB and either two TEs or one TE and a FB. But these plays can be run from a variety of formation, including trips or bunch packages 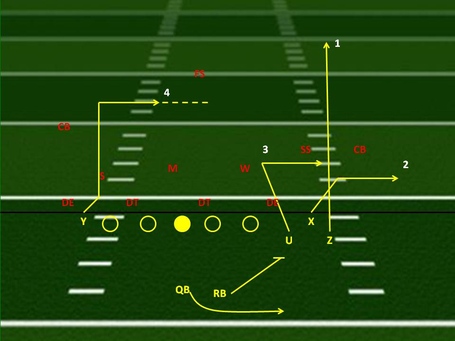 This play here will take advantage of any man coverage by picking for the receiver on the LOS. First target is deep to take advantage of a corner trying to jump a route, after that you're simply reading the flat defender: he breaks with the #1 receiver (outside WR), you find the #3 receiver running into the recently vacated zone. The WILL, for his part, must respect the #3 attacking him and running a crossing route, at which point the #3 will shield and work back to the ball. The typically slower LB will struggle to cover the shifty slot in space.

You can also run it no problem out of a big formation. Here you see your typical flood package out of a goal line formation. 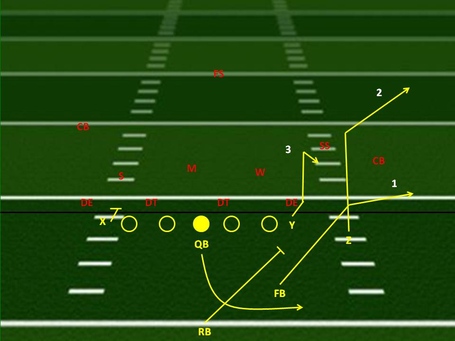 Very similar concepts, picking high/low on the outside corner, if the defense rotates, you can typically find the hitch receiver in a vacated zone working back to the ball.

Corner Throw Back
So, as I said, the defense will start doing things to try to pack in the zones to one side of the field. They won't stay in a base cover 2 like they do in video games. They shrink the field to make it so the passing windows are much shorter. 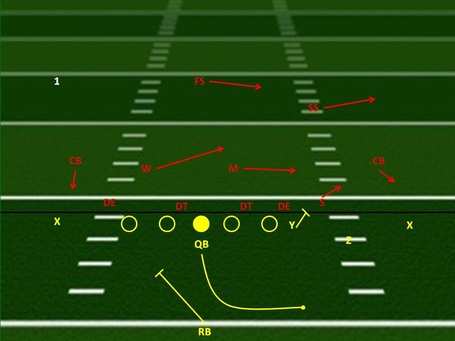 But in doing so, they have opened themselves up for several things. In this instance, note how the safeties slide but the backside corner patrols the backside flat in case of a reverse or something along those lines. There is a deep corner that is wide open. 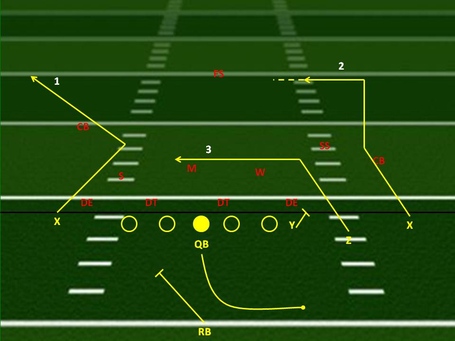 Note here how initially all the routes are similar to routes in other roll out packages. The inside movement by the backside receiver looks like a dig route, the shallow inside movement by the playside #2 looks like the crack out (meaning you fake the crack block on the WILL before running an out to the flat). The outside receiver playside looks like he may be running a corner route, essentially doing a high/low on the playside corner. So everything looks the same initially.

Now to run this play, the blocking from the two extra blockers must be solid. The QB is going to have to sprint out to about the OT and then reset his shoulders to the backside of the play. His first goal is to locate the FS. If the FS has rotated, he knows that there is the possibility that the backside corner is open. Now he must read the backside corner, who has either stayed up to prevent a reverse of some sort, or has mistakenly read sprint-out and the start of the backside WR's route as a dig, and has attempted to jump it in the center of the field. The backside WR must sell that hard before breaking back out to the corner. If the corner route is open, the QB throws it, if not, he works his way back inside. First, if the FS has rotated, the #1 WR (outside) to the roll will continue to open grass and the QB will hit him. If the FS has broken outside to cover the corner route, the #1 to the roll will settle in the vacated center field to receive the pass.

Corner Drops into Cover 3
This is nice against man coverage or cover 2, or any sort of coverage where that backside corner has flat or edge responsibility. Typically though, that corner is going to drop when the rest of the defense rotates. 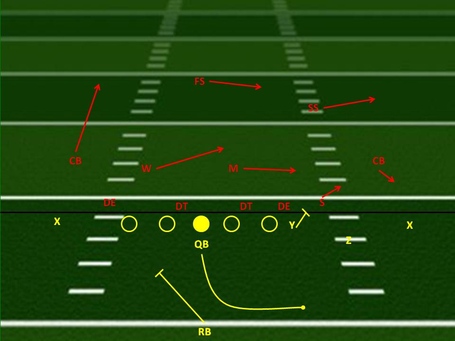 In the past there has been some animosity towards Borges calling the sprint counter. This is partly because Denard didn't really threaten to do much on the sprint out and defenses weren't really respecting it by flowing the defense hard. Instead, they just blitzed into it and forced Robinson to throw over the top, where he wasn't successful at a high rate. But even then it should have been more successful.

But with Gardner being adept at throwing on the run, and also a bit taller to throw over top of blitzing defenders, defenses are forced to rotate to cover the sprint/roll out. So now Borges dials up two different plays to take advantage of teams over-aggressive tenancy to get to the roll side of the field: the sprint counter and the throw back screen. 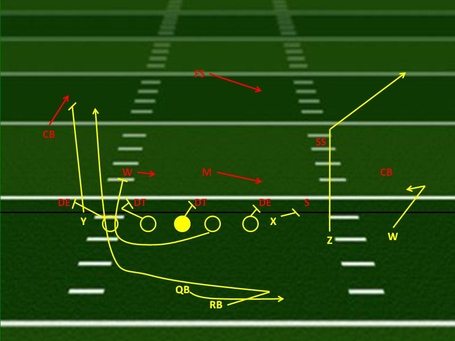 The key to this play is that the initial movement by most of the O-line is to down block, and while it's much more downhill, combined with the sprint out movement from the QB and a mere counter step by the RB gets the defense over reacting, mostly because they didn't properly read their keys (they likely should have read through the pulling OG to the backfield, rather than peaking in the backfield).

Note here that the defense all flows, as described by Herbstreit. The running back steps up to the playside, as he typically would on this sort of roll out, but rather than fan all the way out, he gets "caught in the wash" behind the tackle and leaks out the back side behind the O-line and hidden from view. The corner on the backside stays in his deep third while an OLB has backside contain. But the offensive line screen blocks, only momentarily slowing the D-line before releasing them and getting to the next level. They then have three bodies out to block the OLB alone along with any pursuit coming back from the roll side. The OLB has no chance because the whole defense, defensive line included, has chased Denard to the roll side. This worked here, early in Borges's tenure, I think because ND didn't yet have a good look for how to defend Shoelace in Borges's system. They were still freaking out about him scrambling and being a good thrower on the run. This is the threat that DG actually brings, and so this will be open, like it was here

Conclusion
So that's a look at the roll/sprint out series that Michigan will be running a lot of this upcoming year. If you go back and watch the games once Gardner took over, the amount of these calls went up a lot. This is, as stated earlier, because of Devin's success at throwing on the run while still maintaining a threat with his legs. This series is going to very important to Michigan because it gives a lot of easy pitch and catches for good amounts of yardage. On first down, it mixes up well with a run first attack, netting you anywhere from a first down to a big chunk of the first down. On second downs, it can get you back in a manageable third down if you have a negative or unsuccessful first play. On third down and short, it threatens both with the legs and with short/intermediate easy throws while giving Gardner easier reads to stop defenses from running complex schemes successfully.

And once the defense is lulled to sleep, there's plenty of potentially for big plays.