FRR updates you on the very latest Michigan football recruiting rumblings. Why is the situation at linebacker changing yet again? How did the Wolverines make a sudden jump to the top of Da'Shawn Hand's short list? That and more.

Share All sharing options for: Friday Michigan Football Recruiting Roundup Has A Dream

Da'Shawn Hand has a new top three of Michigan, Alabama and Florida. The shocker? Virginia Tech is no longer in Hand's top group, and a Michigan professor might be the reason why:

Hand told me Virginia Tech is off his list because they don't offer sports marketing. "That was the hardest thing to do," cutting them

Relationships will be key for @thehand54, which is why Va Tech was always such a presence. Said they're out for academic reasons...

Hand told me Michigan's sports marketing professor, "blew me, my coach and my dad away. My dad wanted to sign back up for school."

Da'Shawn Hand said he hasn't been to Alabama in around a year, hasn't gotten to Florida yet. Bodes well for Michigan early on.

The crystal ball for Hand is trending more and more toward Michigan, and it's not hard to see why. Alabama will challenge Michigan with their engineering program -- it isn't impossible to navigate nor is it impossible to get into -- but Michigan probably still leads. Hand's favorite trip was easily his visit to Michigan, and the Wolverines also boast his favorite staff.

Da'Shawn Hand told me today he had a dream when he was 8 years-old that he committed to a school for football and was a big time recruit.

Add "Can read your palms" to the growing list of Da'Shawn Hand's skills.

First off, Sam Webb claims that Michigan will move Allen Gant down to the SAM linebacker position, giving Michigan Mike McCray, Gant and Chase Winovich at the position once Jake Ryan graduates. Michigan is still going after outside prospect Darrion Owens and inside prospect Dwight Williams, and they recently offered versatile prospect Jimmie Swain (more on that in a second). Noah Furbush also looms large, although it's unclear if Michigan wants him as a MIKE, SAM or DE.

What does it all mean? I think Michigan will wait to see if they pick up Williams, Swain, Furbush or Owens and move Michael Ferns accordingly. I honestly don't think Allen Gant will be a serviceable linebacker, meaning that Michigan could still need to flip Ferns with Mike McCray if he doesn't turn out to be athletic enough. Picking up Owens or Furbush would give the staff more confidence in the depth outside and allow them to keep Ferns inside; getting Williams or Swain gives them the option of putting Ferns wherever they feel he's best suited.

Anyway, I like the new offer to Jimmie Swain (highlights). He's a heady linebacker with above average athleticism, although he doesn't have the same explosiveness as someone like Owens, who has a much higher ceiling. Northwestern is the presumed leader and Stanford wants him as well; he's never going to hurt anyone's APR.

Four-star prospect Jamarco Jones is one of the few offensive lineman left on Michigan's board. He'll be making a decision in the near future, but he won't be taking visits:

Won't be making any of my planned visits

Man its crazy to think this time next year I'll actually be moving on to a college campus! #MSU #OSU #UM 

Michigan has made up significant ground in recent weeks, but my gut still tells me that he's going to Ohio State. I'd only be shocked if Jones chose Michigan State.

[Ed note: Jones will now be taking those visits after all.]

West coast wide receiver Dre Brown made it to Ann Arbor this past week. He [sort of] liked what he saw:

Yes, Brown changed his Twitter picture to a photo of him donning a Michigan jersey, but that's about as positive as far as Michigan will get with him. The staff should have one of K.J. Williams or Artavis Scott locked up before Brown thinks about pulling the trigger.

Class of 2015 running back Damien Harris has long been thought of as a Michigan lean, and he recently reaffirmed those thoughts:

Do you have a leader? — Michigan! ask.fm/a/4bce1qhe

My shocked face. Michigan is also recruiting fellow 2015 four-star back Jacques Patrick, who got a tour of Michigan Stadium and all of its glory:

Michigan has 2015 targets that aren't committed telling Michigan fans to show other targets love. That's how well things are going.

In other news that won't shock, Rivals Mike is still a bit of an ass:

There are waaaaaay too many freaking blogs and recruiting "experts" out there, holy crap. No wonder kids are overwhelmed with calls.

I've been doing this for almost 15 years, I don't think I'm the issue "@mattjmobile: @rivalsmike aren't you part of the problem?"

Because Farrell has been doing this for so long, his calls aren't a disturbance for prospects, rather a blessing from the recruiting God

Mike can't perform interviews indoors because most buildings just don't have doorways large enough for his head to fit through. I've pretty much never liked the guy.

Rest assured that Cass Tech prospects will continue to flock to Michigan:

He knows not to send kids to East Lansing, of all places.

Michael Ferns is bulked up and definitely looks the part of an inside linebacker. He crushes running backs, with or without pads on: 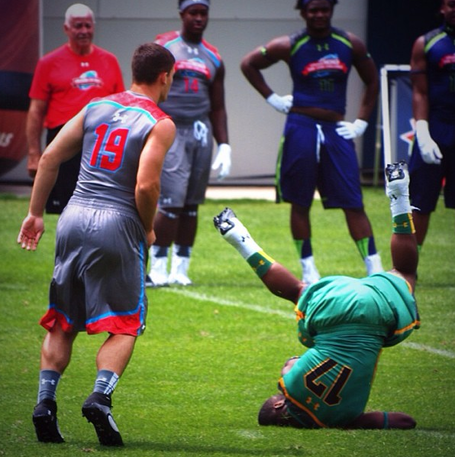 Finally, make sure to check out my piece on the depth of Michigan's recruiting classes under Brady Hoke. Michigan is returning to prominence, but Derrick Green and Jabrill Peppers aren't the only reasons why.