Minnesota is kind of a strange place. Casseroles are called hotdishes. But the beer is excellent.

Share All sharing options for: Your Friday Drinking Instructions Eat Hotdishes and Grill

I remember reading about these things called hotdishes that the Minnesota congressional delegation make every year, because I'm a dork. I remember thinking "oh, these are silly casseroles" and realizing that Minnesotans are just different. Like, different enough to elect a former SNL cast member Senator different. Jesse Ventura different.

That's cool, though. This is what makes my job so fun this time of year - going around the Big Ten and eating/drinking local-yokel style. So last weekend I grilled some brats, bought some tater tots, and made this year's winning Hotdish (recipe here), from Tim Waltz - some kind of combination of beer, brats, and tater tots. This is how it comes out, and it's strangely delicious: (h/t CBS Minnesota and Sen. Al Franken) 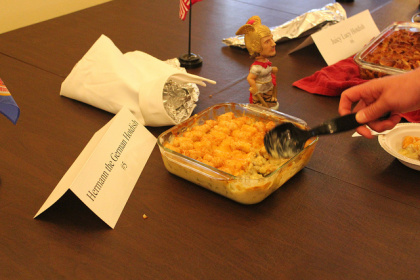 It's creamy and tatery and you get a little bit of the beer taste, which obviously qualifies it for YFD. It's also got Schell's in it, which is absolutely worth drinking if you're in the upper Midwest, and absolutely worth drinking if you aren't. It's beer. That's the extent of what I'm going to say about the taste, because it's a plain American lager.

Schell's is the second oldest brewery in America, but hasn't nationalized quite like its elder, Yuengling, has - that's okay. Go to Minnesota or the UP and try one of the myriad varieties Schell's has. They've rebranded their lager to "Deer Brand" and the results are a cool bottle and the same basic lager. It's worth drinking though - and generally cheaper than Yuengling.

Back to Minnesota. I've only tailgated with some visiting fans in Ann Arbor, but I liked it. I haven't been to any kind of Gophers home game, but they've got that nice new stadium. It's cold there, hence why they like these hotdishes. I still don't quite understand the cultural prevalence of the "sorry kids, I'm working late, heat up the casserole I've got in the fridge" meal, but that's totally fine. I ate it, and I really like tater tots and beer and bratwurst.

That said, in Minnesota, it just seems like it fits. Go have yourself a Schell's, enjoy the beautiful weather, and watch my favorite Michigan-Minnesota clip from one of the best comebacks I've ever seen (start at 3:34):