MRR updates you on the very latest Michigan football recruiting rumblings. Could the defensive staff offer another sleeper during Michigan's camp? Is Jamarco Jones really a lock to end up at Ohio State? That and more.

The staff will be in Ann Arbor until Thursday, coaching and scouting invited prospects from around the country. These camps aren't vital, but they do offer the staff an opportunity to get a personal look at under-the-radar type of kids who might otherwise slip through the cracks. Last year Channing Stribling came in and impressed the staff enough to earn an offer; I think it will be much tougher to earn and offer for 2014 campers this year, but there are a few players who could earn surprise offers.

Notable prospects by class, with especially important recruits in italics:

My thoughts on the list and the camp in general:

Jamarco Jones Still Thinking It Over

Four-star offensive lineman Jamarco Jones did indeed decide to take the last of his visits, including one to Ann Arbor:

Jones left Ann Arbor for East Lansing not long after, talking to one very important coach:

Just had a good talk with Coach Izzo

Excuse me while I laugh. Dantonio isn't going to win this battle. Jones will see Ohio State today before making his decision on June 27th. If I had to guess I would say OSU holds a slight lead over Michigan, but at this point it could be the other way around and no one would know it.

The Detroit SMSB camp was held this past weekend, and it brought in quite a few prospects of note. It also brought out a ton of college football coaches:

A ton of coaches out here at Sound Mind Sound Body. Toledo, MSU, Illinois, Michigan, Ohio State, EMU, WMU, Indiana and some others

Michigan running backs coach Fred Jackson was there telling everyone that they're Vincent Smith, but fifty pounds heavier and more nifty in the backfield. Brady Hoke spoke at the camp as well:

Mark Dantonio was this close to interrupting Hoke mid-sentence, because these Michigan coaches are talking way too much. I'm sure Hoke complimented Mark on his superb speech on tackling just to make sure that didn't happen. 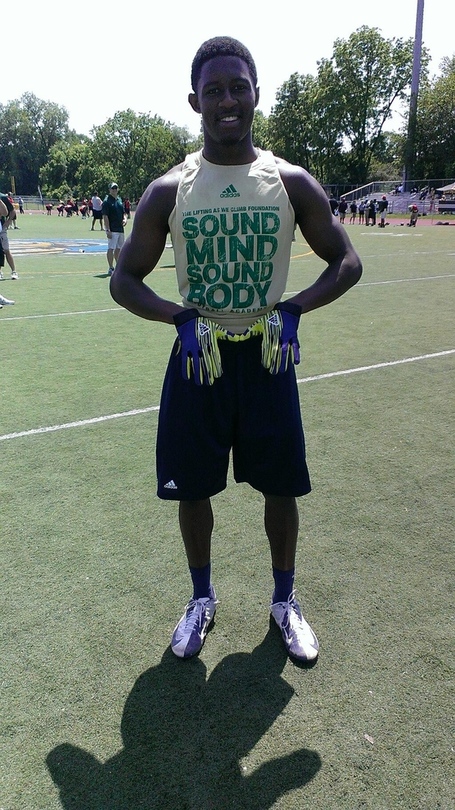 He's pushing 205 pounds now and would like to get close to 215 before he arrives on campus. It's no surprise that Ways is bulking up considering what he told me months ago. His offer and commitment to Michigan should lead to more confidence and dominance on the field this season.

Michigan target Brian Cole was at the camp. He made this poor kid look silly:

Cole has the speed and hip flexibility to play on both sides of the ball, which is much of the reason why he's already in the top 100 players in his class.

Class of 2016 safety Levert Hill is the younger brother of incoming safety Delano Hill. He impressed a few media members and coaches at the camp:

2016 Cass Tech DB Lavert Hill has two interceptions in one on one drills so far. He looks good. #SMSB

Finally, the aforementioned Drue Tranquill impressed everyone who saw him at the camp:

I'm not sure if the staff wants him as an inside or outside linebacker, but I am fairly certain that they would rather have him playing close to the line of scrimmage. He has above average length for a linebacker prospect and already plays with great leverage, making me believe the SAM spot is calling his name.

Five-star class of 2015 defensive end Jashon Cornell took a quick visit to Michigan this week. He enjoyed his time:

Had a great visit at the University Of Michigan #GoBlue pic.twitter.com/LI0BnvAZ7c

First of all, is it really necessary to block off the logo? Second, remember Cornell's name, as he's already considered one of the best defensive ends in his class.

Wide receiver Jalen Brown made a trip to Michigan last week, and he spoke to Rivals about the difference between Michigan and the other schools he visited:

Jalen Brown visited Michigan, Michigan State, Ohio State and Wisconsin this week.
He doesn't mince words when he talks about his experience in Big 10 country. He's most forthright when it comes to discussing the differences between the Wolverine and Spartan programs, which he was able to compare side by side.

"It was different at Michigan," Brown said. "They didn't show that they needed me too much. It was more about me being a valuable player. They seem pretty set at receiver. With Michigan State, they kind of showed that they needed me there. It was more being honest with how they see me and what they are trying to do. They have really good people there, and they were trying to show that to me."

That quote is gold. Brown doesn't know it's gold, but it's gold. He probably won't end up in the Big Ten in general.

Michigan linebacker commitment Michael Ferns might see his stock fall after his most recent camp venture:

LB Michael Ferns, Saint Clairsville, Ohio: The 6-foot-3, 233-pound Ferns is at his best when he is playing downhill and stuffing the run. Camp/7-on-7 settings do not showcase that element of the game, but they give a good sense of how a player moves in space and plays coverage. Those are the aspects of Ferns' game he needs to work on. He had trouble changing direction and turning to run with backs and tight ends down the field.

I've been concerned about Ferns' lack of ability to play in space since day one. No one knows if he'll slide inside or play with McCray and Winovich at the SAM; he'll have weaknesses wherever he ends up.

Rosen only participated in the camp portion of the event on Saturday, where he went through position drills and instruction and then threw in the one-on-ones and he made quite an impression. He was arguably the best quarterback on the field that day and at worst he was third, impressive for a sophomore. While we didn't get to break down his abilities in the 7-on-7 tournament, everyone came away impressed with his arm strength, release, accuracy and footwork.

Rosen already holds a Michigan offer. I don't see him leaving the West Coast, so don't get your hopes up.