With a struggling program and new head coach, could Purdue pull together a decent transition class? Or will they have to wait for the momentum to build?

Sitting at the bottom of the B1G's 2013 rankings along with the previously reviewed Minnesota is none other than the subject of this week's class review, Purdue. As with Minnesota, one can't blame small class size on the low ranking of this class; Hazell brought in 24 kids. While Purdue has hardly been a recruiting powerhouse in the past few years, this still has to be a disappointing, yet perhaps understandable, result.

When Hazell was introduced as the head coach on December 5, Purdue had a relatively small class made even smaller by the defection of two of its most needed recruits to Nebraska. JUCO DE Randy Gregory was committed to Purdue for the second time around, after having to forgo his freshman year to head off to junior college. While he actually decommitted from Purdue far before Hope's firing (October 30), most believe it was due to the inevitability of the action, which most fans saw coming after frustrating poundings at the hands of Michigan, Wisconsin, and Minnesota (!!). Gregory on the direction of the Purdue program

Originally from Fishers, Ind. - a northeastern suburb of Indianapolis - Gregory chose to play football for the Boilermakers out of high school instead of pursuing offers to play basketball in the MAC. But as Purdue has struggled in the Big Ten this year - losing its first four league games - Gregory soured on attending there.

"It's just not the same," he said. "It looks like it's heading in the wrong direction. Everybody knows that Coach (Danny) Hope is on the hot seat.

The second decommitment is a little more mystifying to me. Although Purdue had no other offensive linemen committed in the class (the general rule is 3-4 a year, for most teams), TX OL Dwayne Johnson decided to open up his recruitment when it seems as though Hazell simply slowed down their interest in the kid.

"Some other schools started coming around and I hadn't heard from Purdue for a while so I just started looking elsewhere," Johnson said Rivals.com's Adam Munsterteiger. "I was keeping Purdue as an option and I have spoken with coach (Darrell) Hazell but I decided to decommit from Purdue.

So, I'm not quite sure what to make of that. Intuitively, I would imagine that perhaps Hazell was just overconfident in the kid's love of Purdue and didn't feel the need to continue recruiting him as hard. I mean why would you alienate the only offensive lineman you have committed in a class? Perhaps I'm just not giving Hazell enough credit, though. I suppose time will tell.

Of course, like all of the other coaches we've covered thus far, it wasn't all bad. Hazell signed a few pretty good players, a couple of whom were left over from the Hope leadership. Danny Etling was a 4* QB who really impressed scouts during the Ohio Elite 11 and subsequent finals. Etling, as we'll discuss later, is now squarely in the mix for the starting quarterback spot this fall.

Also included was GA RB Keyante Green, who had a bit of a funny recruitment. He originally committed to UCLA over an offer list that included Georgia and Georgia Tech, although he had never actually been out to LA. He finally went, and then Jim Mora and his staff began easing up their contact with him. He decided to go out to Purdue, and had this to say about the Boilermakers.

I like the coaches at Purdue," Green said Tuesday afternoon via phone. "I took my visit to Purdue and loved it. I looked at the depth chart and see that there is only one or two running backs ahead of me. In recent weeks, I started to hear less and less from UCLA."

That whole depth chart issue enabled them to bring in a total of 4 running backs, but we'll discuss that later as well.

In addition to the 3 other running backs, Hazell also added 2 touted athletes of his own to the class once he took over. FL DB Leroy Clark also held offers from Florida, Ole Miss, and West Virginia at various points, before becoming the first player to commit to Purdue under the new leadership. OH WR Dan Monteroso was snagged from the likes of Maryland and Boston College just before signing day.

DB Leroy Clark. Hazell likely sold Clark on the possibility of quick playing time, among other things. Clark isn't very sudden in his movements, but his hips are fluid and when he gets up to his top gear, it's good enough to cover just about anyone. At 5'10, 180, he's also probably fairly close to filling out his frame. Purdue isn't in need of immediate help in the defensive backfield, but it's a group that's getting close to graduation.

RB David Yancey. You read it earlier, Purdue is really, really thin at running back. Although he's only the third highest rated back of the group, he seized the opportunity by enrolling early, and looks to have made the most of it.

David Yancey seems impressive - Yancey graduated from Lake Central early in order to get to spring practice and it seems to be paying off. There have been multiple reports of him being used in roles such as running back and punt returner.

QB Danny Etling. The highest rated signee of the class also seems to have the easiest path to a starting job, thus far. After enrolling early with Yancey, he competed with RS Freshman Austin Appleby and Senior Rob Henry for the starting job. After spring, it looks like Etling and Henry are the front-runners. Even if Henry snags the nominal starting position away from him, I'm sure the staff will cycle in Etling as much as possible in order to prepare him to be the quarterback of the future.

S Austin Logan. Purdue needs some depth at safety, and unless Clark ends up there (he looks more like a CB to me), Logan sort of wins by default here. According to 247, the other safety in the class has signed with Grand Valley State, likely a result of grade problems. It's never ideal to put freshman in a prominent place at safety, but Logan should be afforded spot duty in games in order to develop his craft.

DE Antoine Miles. Miles' ceiling looks fairly low, but he's already pretty developed in his technique. I'm not enamored with his explosion or hips, but I like his motor and straight line speed. I think the staff might play him in some just to develop depth for the future.

RB Keyante Green. Had you asked me before spring, this would have been my prediction for the quick contributor at the running back position. The former UCLA commit has a thick, strong build and quick feet, as well as good vision and lateral agility. If he was but a few inches taller and a few pounds heavier, he'd probably be an elite LB prospect, as well. As it is, Green should have a bright future ahead of him as a Boilermaker.

DT Ra-Zhan Howard. I've read a few Purdue outlets in my research that think Howard is likely to be a quick contributor, which I disagree with. I think he has quite a bit of potential, but looks like he needs major work on his technique and lots of time in the weight room before he becomes a viable option. Still, despite his somewhat stiff hips, I like his burst off the ball and knack for getting to the ball in the backfield. He could be disruptive in a few years.

LB Dezwan Polk. Before I watched his senior highlights, I was going to include Polk simply because he pretty much has to contribute at some point. Purdue isn't very talented or deep at linebacker, and he's the only one they brought in this cycle. After seeing the strides he made his senior year, however, I'm impressed. Granted, a lot of the plays that come his way are essentially gimmes (unblocked edge rush, interception that's lobbed into his hands), but he does flash excellent athleticism and pretty decent instincts for such an unheralded prospect.

RB Dalyn Dawkins. It considers me somewhat that neither Louisville nor Kentucky offered the Trinity HS standout (home to '13 Louisville WR commit James Quick and Kentucky DE commit Jason Hatcher), but my eyes still see what they see on film. The 5'9 speedster is the kind of quick-twitch guy that would have made many-a-GERG defense regret being alive. While he may not be quite as talented as some of the 'related videos' that popped up on my video screen (Miami RB Duke Johnson, former WVU WR Tavon Austin, former UF RB Chris Rainey), he should definitely be good in a supplemental role down the line.

WR Dan Monteroso. What I really like about the high school teammate of Michigan commit Michael Ferns is how he looks like he's really worked on the subtleties of his position, making him pretty advanced for his age. His routes look precise, he flashes his hands to get pressing defenders off his chest when trying to get off the line, and couples all of that with impressive speed.

Danny Etling, Purdue's top commit, would come in as the 16th ranked prospect in Michigan's class, shortly behind Maurice Hurst. Their second ranked commit, Keyante Green, would come in as Michigan's 25th best recruit with a composite average of .8547. It's also interesting that Purdue's average commit is over an inch shorter and 13 pounds lighter than Michigan's, although that's obviously because of the varying number of lineman in the two classes. Still, obligatory MANBAW.

--> Like Minnesota, I think the state breakdown of Purdue's class is very interesting. Georgia and Florida combined to provide Purdue with 40% of their class. Kentucky, New York, and Texas all provided players to the Boilermakers. It's interesting that these lower crust of teams nabs so many players from SEC country, especially considering that guys like Clark and Green were recruited by the powerhouses in their respective states in addition to Purdue.

--> While it may not be fair to judge Purdue by a 2013 class that new coach Hazell had but 2 months to hold together, the 2014 class doesn't look so promising either, at least not yet. 3 of their 4 commits are ranked as 2 star caliber players according to Rivals, their quarterback being the only exception. However, you'd be hard-pressed to find a quarterback committing in June (to a B1G school) that has a rating any lower than 3*. Of note to Michigan fans, however, is that they might be one of the favorites for Gelen Robinson, little brother of Michigan Basketball Forward Glenn. 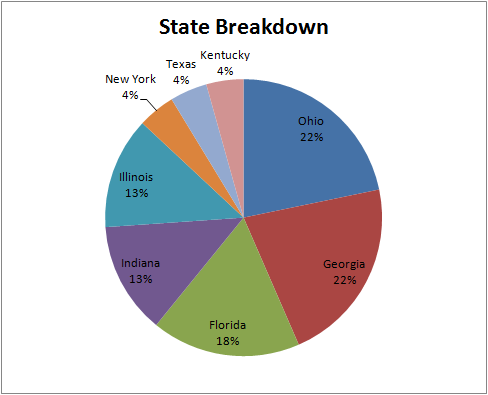 I don't know, man. There has to be a loser here somewhere, and Minnesota might actually have a point in saying Kill can make something of the lesser touted players, since you know, that's what he did last year. There simply isn't a whole lot to like about this Purdue class once you get past Green and Etling.

Of course, that's not to condemn Hazell. It was a tough circumstance to place a new head coach, and selling his resume at Kent State isn't likely to have people jumping up to join. He'll need to show major improvement on the field this year, and it'll be a hard schedule to accomplish such a feat. I wouldn't want to be in Hazell's shoes right now, and I'm hoping the fan base can keep some perspective.

Next Up In Big Ten Football