Inside the Playbook - Pass Game Basics - Part I

Every offense has its basics, its fundamental plays that get the pass game humming, the QB confident, and the receivers in a groove. While these plays tend to be simpler, there are nuances that can dictate the success of such plays.

Share All sharing options for: Inside the Playbook - Pass Game Basics - Part I

Introduction
Al Borges's West Coast Offense (WCO) relies on many concepts and patterns to take full effect. Not unlike any good offense, Borges's system has its base passing plays. These plays help get a QB in a rhythm, they help pick up easy yards, and they soften defenses away from the run game. Today we are going to look at the most basic of these plays, and discuss how even the simplest plays in this offense come with plenty of nuance.

Hitch
If you played peewee ball, most likely this was one of two pass plays you learned. Then why would a college team still be running it? Because it works. Back then, most likely the WRs were told to run about 6 yards and turn back to the ball. As you grew older, the QB may have been told to throw it before the WR breaks off a quick 3-step drop. The whole while, the offensive line was essentially told not to let anyone through the middle. This is all a good base, but at the next level there is a little more to it in order to make sure it remains the simple play it is but still successful.

Let's start with the offensive line. For this pass protection, each linemen will "slide away from the call", which essentially means they will slide a gap opposite the TE (the backside) and block anyone that attempts to come through that gap. The dashed lines in the figure below communicate the second level defenders that the offensive line must keep an eye on. This is a very simple blocking concept that blocks inside out. This ensures that defenders can't quickly get to the QB before his quick release.

The FB, or in the case of a single back formation, the RB, will cut the first man outside of the front side OT. The key is to cut the defender to make sure he can't get arms into the passing lane to knock the pass down. Getting the defender off his feet and down is much easier in this case than blocking straight up and keeping the defender's arms down (which is made more difficult because there is space between the blocker and pass rusher before the blocker can get to the man to prevent hands from going up). The second RB will quickly check for any #4 blitz coming from outside the backside OT. A #4 blitz indicates a fourth man blitzing to that side of the center, in common terms known as an overload blitz. If no overload blitz is sent, the RB will proceed to run his route. 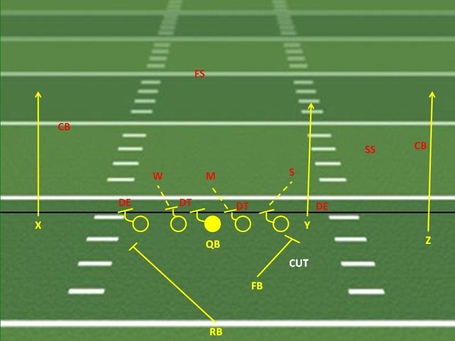 Note here that if no man attacks the O-line gap responsibility, they will work back to double inside.

The RB will likely check into a "sit" route. To properly run this route, the RB will release outside the end man on the line of scrimmage (EMOL). At about three yards depth, he will sit, turning inside and facing the QB.

The TE will likely run what is known as a "look out" route. This is sort of a cross between and outside breaking hitch and a quick out. Essentially, the TE will quickly release outside at about 4 yards depth and no more than around 2 yards outside his original alignment. He will quickly flip his eyes back into the backfield and find a soft spot in the defense, being careful not to drift into the flat.

Now let's look at the WR. The hitch route is one of the first WRs learn to run, but it gets a little more complicated as you progress in football. Against any sort of soft coverage, the basics are going to be maintained. The WR will release at the CB's leverage at about 6 yards, or on his third outside step, then plant on his outside foot, snap his head back to the QB immediately and let the body follow. The ball should be in the air already. The WR should think turning outside after the catch and away from the CB and help.

Previously, we discussed the four types of coverages that a WR must recognize: retreat, hang, engage, and bump. Retreat, a soft coverage, allows the hitch to be very successful. Most teams run this type of coverage because it's safe, giving up some underneath stuff but being in good position for any intermediate routes or deeper.

If the CB rolls up and is engaged, it becomes more difficult for the hitch to work, and the same can be said for bump and run coverage. This is because defenders will tend to play tight and then trail the play, putting themselves in good position to beat the WR to the ball. Under these circumstances, the WR will adjust his route. In both of these cases, the WR must sell the speed slant inside before ripping back outside, getting his inside arm underneath the CB, getting the inside should past the CB (getting narrow and slipping) and holding the defender on the backside. If there is deep help, the ball should be thrown about 20 yards downfield with a bit of pace. The coverage corner will likely be trailing the play, and this is an instance where the back shoulder throw is used fairly regularly. However, if there is no deep help, the WR will extend the route and the QB will air it out about 30-35 yards downfield. In both cases, the receiver must keep about 4 yards of cushion from the sideline to give the QB room to work.

Lastly, the hang coverage is probably the most dangerous for this play. Because the CB is sitting outside of the WR, with the WR between him and the ball, he is positioned to see the QB throw before the WR breaks and get to the ball before the WR can.

So what is the QB looking for? Pre-snap, he's going to check the CB depth. This will likely tell him what his WR is running. He's also going to check the backline safety to give an indication of which side he will choose. The QB will choose the side before snapping the ball, only potentially changing if he sees a quick roll at the snap, though because of the quickness of the play, even this is unlikely. After the snap he'll be reading the flat defender. This will key him on if he can hit the outside WR or the inside receiver. Timing is crucial: on time it's easy yards, late and it's a potential pick 6. 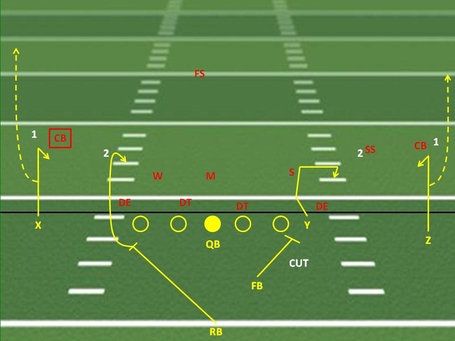 Here, we look at a formation with a slot receiver. On this side of the field the QB will work his progression from inside out. 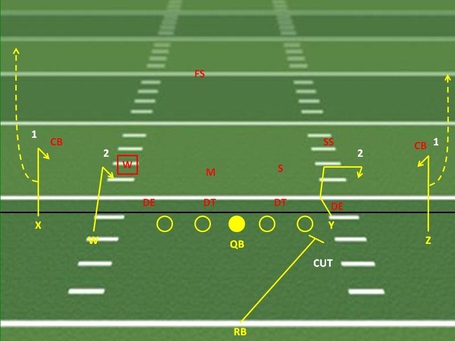 Slant
On the slant route, the offensive line blocking is the same. Essentially, protect up the middle, and the FB chops the guy on the edge. Rather than the TE and RB staying inside however, they will now run arrow routes. To run this route properly, the aiming point is about 3-5 yards downfield. The TE (or RB) will release outside hard and gain initial proper depth. Once he crosses the numbers of the outside most box defender (D-lineman or LB, typically), he will slow down and turn to face the QB if the ball hasn't already been thrown.

The WRs are going to push upfield hard and plant on the second outside step. They will then accelerate at about a 45 degree angle, making sure to cross in front of the defender and clearing underneath coverage. Against a zone they will curl into an open window.

Some adjustments: typically the initial drive off the LOS will be angled outside, widening the corner's position upon the release. Against tight coverage, the receiver must first sell the fade before getting underneath the CB. Again hang coverage, the receiver will really need to work on widening the corner, he will then slip back inside and expect the ball once he clears the outside LB.

Without a slot receiver, the QB will work WR to arrow. With a slot, the QB will work inside out. The inside slot will tend to run off the inside defender, leaving a void in the defense. Typically, while the slot is the first target, the outside receiver is the more likely of the two to get thrown to. Pre-snap clues are similar to the hitch route, looking for the SS depth to determine which side of the formation to attack. Once the ball is snapped, the flat defender will determine whether you wait for the outside WR to clear him (without slot) and hit the arrow if he follows inside. 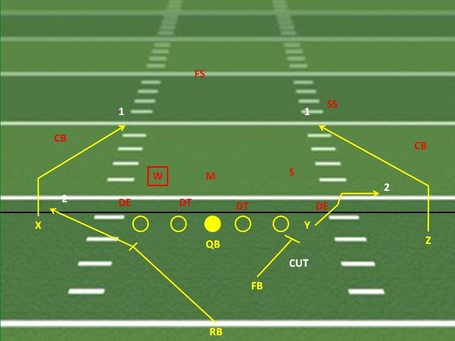 With a slot, the QB will read if the flat defender follows the inside receiver, where the QB will hit the outside receiver behind the play. If not, look for slot void and work outside to void. 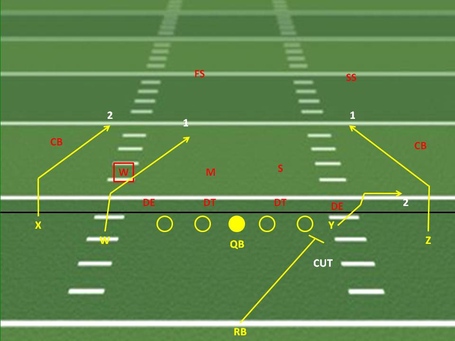 Quick Out
For the quick out, everything from the offensive line to the RBs and TEs is the same. If slots are used, they will replicate similar routes as the TE and do a look out route.

The WR, for their part, will run quick outs. To run an out route, the WR will release at the corner's outside him to a depth of 5-6 yards. The first inside step should put the WR at a 45 degree angle, the second inside step back parallel to the LOS. xcept against bump and run coverage, where they will convert their routes to fade, forcing the defender onto their back. It is important that the WR snap his eyes back to the QB on the second inside step, because the ball should be in the air before the WR gets out of his break. Against tight coverage, if an outside release can be established (most often the goal of bump coverage is to force the WR to release outside), then the first steps should be used to gain separation on the defender. If an outside release can't be achieved immediately, the WR should push hard inside and release into a fade, getting narrow and slipping the corner. Keeping cushion from the sideline, the ball should be thrown about 20 yards downfield. Against outside hanging coverage, the WR will still try to release outside. Regardless, his route is ending in a fade, as any sort of out route would be run directly at a CB waiting to break. If outside leverage can't be established, the WR will rip and slip back inside after widening him. Immediately after slipping past the corner, the WR should look back for the ball, as it will likely be thrown with some zip to hit the WR in the seam.

The QB, for his part, will read outside in. A three step drop, the ball must be thrown after quickly after the third step if the intention is to hit the quick out. 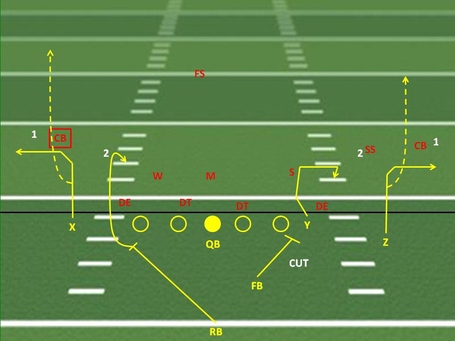 Conclusion
These are about as simple of plays as can be run, but they are important. They give the QB confidence, they get the WRs in a groove, and they set up passes later in the game. While they are simple enough to run at lower levels, to run properly at the college level, the QB and WR must be on the same page to take full advantage of the defense. Up next, we will look at a few more basic plays that are essential to the WCO, before we begin to dive deeper into Borges's playbook.