Just because it's basic, doesn't mean it isn't dangerous. In the final part of the pass game basics, we are going to look at how Michigan will break off chunks of yards at a time while maintaining a simple, if not adoptable, attack.

Share All sharing options for: Inside the Playbook - Pass Game Basics - Part II

Introduction
Last time we talked about some of the most basic plays in the playbook. This time, we're going to stick with some of the basic play calls, but run them a little bit deeper. These are some bread and butter plays that you will see to pick up big chunks of yards, mostly against soft coverage. After several successful runs on first down, or teams playing second down and long extremely safe, these plays are simple enough for the offense to run successfully on a consistent basis, while maintaining enough adjustments to make them difficult for defenses to defend.

Blocking
All these plays will run a blocking scheme based on protecting the QB for a 5 step drop. The offensive line and the QB will work in tandem to find the strength of the defense, and then make a left, right, or middle call. This call is based on numbers advantages for the defense and is used to essentially slide the protection to keep the QB clean. Typically, most situations that aren't obvious pass downs will receive a middle call as defenses attempt to remain balanced.

The weakside OT will block the first man on the LOS that is lined up over top of him or to the outside. The three interior linemen will listen for the directional call and adjust accordingly. The call comes when the defense has more 3 and a half or more box defenders on a single side (the half typically coming from a shaded Nose over the tackle). This essentially produces a line slide to help out on that side. 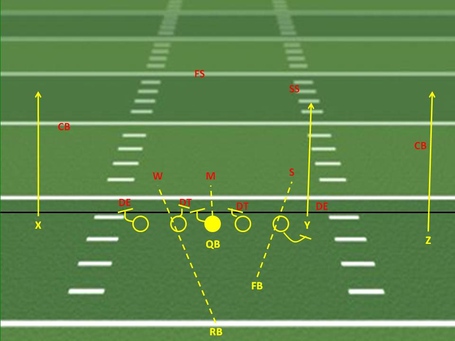 Deep Outs
Against normal coverage, the WRs are going to be running your standard deep outs. To do this, the WR will attack the CB's outside hip. On his third inside step, he's going to break at a 45 degree angle, and then on his next inside step he will break parallel to the LOS. Shoulders need to stay low, and off the second break the chin needs to be snapped around an expecting the ball. The route will be about 12 yards in depth.

Against tight coverage, out routes are difficult and risky because the defender is typically in a trailing position once beaten off the LOS. This means that if the if the CB and WR break near the same time, the CB will be between the WR and the ball, which too often would end poorly. So to mitigate this issue, the out route gets adjusted into a fly route. To do this, it is typically necessary to first threaten inside. Cushion from the sideline must be maintained, so the WR will tend to get skinny and slip the CB, essentially ripping through his outside shoulder to maintain about 4 yards from the sideline. The ball will then be thrown over top of the coverage, its loft and air will depend on the safety help.

A similar problem exists against hang coverage for obvious reasons. It is still important that the WR try to release outside, but if he can't, he should slip inside after widening the hanging CB, and then retrace back toward the sideline. Once the CB has been cleared, the WR should be looking for the ball.

Meanwhile, the RB will be the QB's second option, running either a stop route into the flat, or leaking all the way outside depending on where the defenders are located.

The TE will work a streak into the middle of the field. The will maintain the safety inside, but more than that, against cover two it's a potential big play. Against single high coverage, the TE will flatten his route and attack the void behind the LBs and in front of the deep safety.

The QB will be reading the CB depth and the back line safety prior to the snap. The CB depth will hint at the proper WR route, and the safety positions will indicate the side of the field to attack, and the possibility of hitting the streaking TE against cover 2. If the TE isn't the target, the QB's eye will focus on the flat defender. Likely the flat defender will stay inside on the leaking RB and won't be able to undercut the deep out. If he does quickly get toward the sideline, the QB will check down to the RB. This means the flat defender is the QB's primary read. 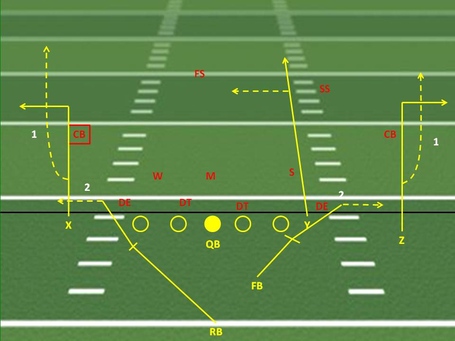 And notice that there is very little change when switching a TE for a slot. The same could be said if you had two TEs to one side, or a single back with two TEs. The #2 receiver on the strong side (second from the outside) will attack center field. The others will block if necessary and leak. 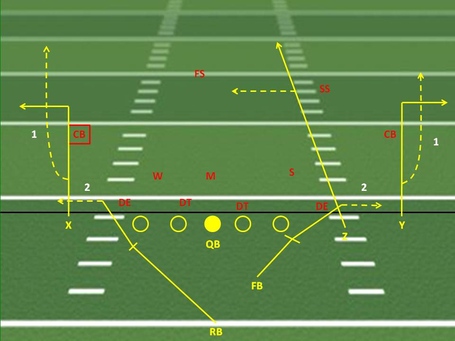 Note how the TE (near side) runs a streak. However, Iowa is not showing 2 deep coverage, and instead has showed what appears to be a cover 3 with the SS coming up on the TE. Gardner is then able to read the flat defender and determine he can get the ball over the top of the defender between the deep and shallow levels of the cover 3.

Comeback Route
The O-line, TE, and RB all have the same routes/reads.

The WR will aiming for about 17 yards before coming back to the QB, making for about a 12-15 yard completion. The route will be run for both soft and tight initial coverage. The only adjustment will be made against hang coverage.

The WR must first sell the streak and aim at the CB outside shoulder, getting the CB to get out of his back peddle and flip his hips. Against soft coverage, the WR will put on the breaks, meaning he will sink his hips and drop his shoulders, then accelerate out of the break and back to the ball.

Against both press coverage the WR will first threaten inside before releasing outside. If the defender is side-by-side once a release has been established, then the WR will put on the breaks. If the CB is trailing the play, the WR will "wiggle" at the top of the route to lose the defender, likely forcing the defender to bite inside and giving room.

Against hang coverage, the WR will try to get outside, and ensure he doesn't get pushed too far inside. He will then get narrow and slip inside if he cannot get outside, get back on track with about 4 yards of cushion with the sideline and run a fade route deep, turning and looking for the ball once he has cleared the corner.

The QB will be reading the back end safety again, to pick a direction and determine if the middle of the field will be open to hit the TE. If not, the QB will read deep to short based on the flat defender. Typically, rather than a 5 step drop, a deeper 7 step will be used here to give the WR more time. Timing is essential and the ball must get out quickly. 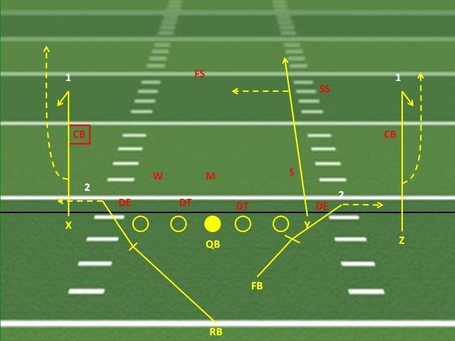 A little more shallow than previously described, but the same general concept is there.

Post
The O-line will be doing a similar blocking scheme here. The RBs (or the TE in some instances) will leaking all the way out into the flat. Then typically, the TE (though sometimes a RB) will leak into the center of the field about 5-7 yards deep, keeping the LBs up in coverage.

Against your typical coverage, the WRs will run their post routes. This means the WR will attempt to force the corner into a hard retreat and widen his location before breaking inside (cutting across the face) the CB and away from the safety on his fourth outside step.

Against engaged coverage it will not be beneficial for the WR to run the post because the CB will be directly in the path. Therefore, the WR will attack inside off the LOS and slip the outside shoulder of the CB. He will then wiggle to lose the CB before breaking to the corner.

Against bump and run coverage, the WR will threaten inside before running a fade route, making sure to maintain proper sideline cushion.

Against hang coverage, the CB will be sitting on the post. To offset this, the WR will gain inside position, forcing the CB off the sideline. The WR will then "head stick", or essentially juke with his head to maintain the safety in center field, and he will then work to the corner, maintain a more vertical path than a true corner route to keep gaining distance on the corner.

The QB will read the FS pre-snap to decide side and angle the post will be run (more vertical angle against single high, more toward center field against two high). He will then essentially read a delta concept, or a triangle with two short receivers. He will work middle safety to curl defender. If the TE maintains his threat in the middle of the field, there should be a void in front of the post receiver to fit the ball. If not, the QB's eyes will work the curl defender between the leaking RB and the TE in the middle of the field. 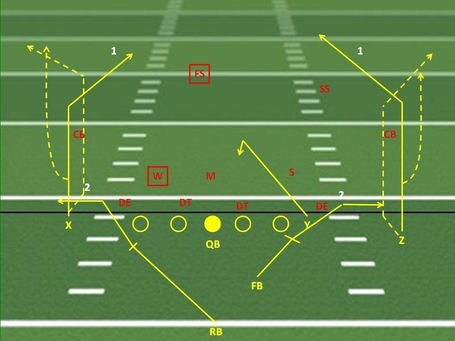 Post-Corner
Lastly, let's look at the post-corner. Here, the TE and RBs will do what they did for the deep outs and comeback plays. The WR though, will threaten the post before breaking to the corner.

The WR will set up the CB and make a hard step inside on his third outside step, selling the post. He will then turn he head and eyes and "demand the ball" to force the QB to respect the post, along with his hips. Running under control, about 85%, the WR will then plant on his second inside step after his post break and cut back outside to the corner. If the CB doesn't bite on the post, the WR will flatten out the route on top and run more of an out to give himself more room for the ball.

A narrow and slip move will be used against tight coverage, with the typical wiggle before breaking to the corner if the defender is trailing. The route should be run leaning inside to force the defender to respect the fact that the WR could get inside if he broke hard enough.

Against hang coverage, the WR will start his path directly inside to either get the CB off the sideline or force the CB to pass the WR on to the inside defender. He will then get vertical before getting too far inside, head stick the safety inside, before hitting the corner.

The QB is reading the back line safety pre-snap to determine which side to attack. He then reads the deep third defender. If that defender bites on the post, the corner will be attacked, if not, a much more shallow out route will be the key. The QB then must check the flat defender to ensure the flat defender hasn't been given the opportunity to undercut the route, and if so, check down. 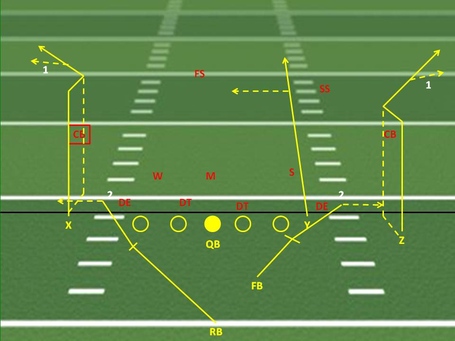 Note here that Roundtree threatens inside first, forcing the corner to respect the post, he then leaks to the corner.

Conclusions
So these are fairly simple plays that can set up the defense and can pick up important yards when needed. These plays are basic, but they are run nearly every game and have enough adjustments to make them difficult for defenses to simply go out there and cover, particularly if the run is still somewhat threatened.