Michigan State's defense has been one of the best in the nation the past couple of years. This is due, in part, to the scheme that they run that combines the 4-3 Over along with the cover 4. We will discuss a typical cover 4, MSU's variation of it, and the adjustments they make to certain things offenses will attempt to do. Oh, and no more Datbull jokes, I promise.

Share All sharing options for: MnB B1G Preview: MSU's "Cover 4 life, Cover 4 for life" - A breakdown of the Cover 4

Last time we discussed MSU's front 7 scheme. Their front 7 sets up a lot of their success, but that success is also tied to their favorite coverage: a variation of the Cover 4. State is pretty much aggressive at every defensive position on the field, and this steps from how the back 7 play together in coverage. In this part, we are going to look at how MSU's cover 4 differs from most, how they run their cover 4, and how it all ties together to make one of the better defensive units in the nation. 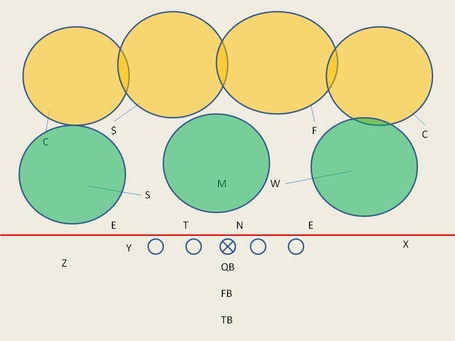 By looking at this play diagramed, it looks like it's some sort of soft, prevent defense. The way MSU plays it is anything but. Still, most teams that run a cover 4 play a little softer on the outside, but still is far from a cover 4. In fact, the cover 4 plays more like a man coverage than a zone coverage, how so and why, well let's look at a table that describes some of the defensive responsibilities.

Here's a diagram of how many cover 4 teams will align 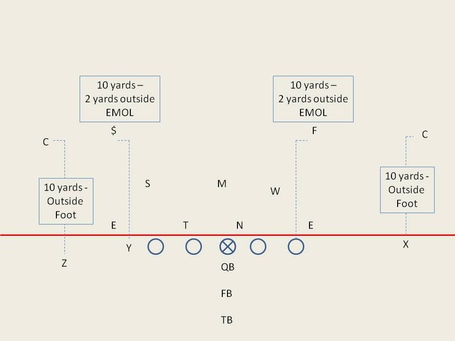 The safeties will both be keying through the EMOL to read run/pass. Pre-snap, the cover 4 looks a lot like a cover 2 shell. Maybe the safeties are a little closer to the LOS, but that's difficult for the QB to really see. The first key difference will be right at the snap. In cover 2, the safeties will begin to retreat, but in cover 4 they will play down field rather than soft peddling. This difference is one of the big reasons the cover 4 sets up well to play the run.

Bringing two safeties down potentially brings 9 into the box. Both safeties will play to fit outside the EMOL in the D gap if the play is run toward them. They will attack and fit with their inside shoulder, keeping their outside arm free to prevent anything from escaping outside. Away from them they will take care of the cutback, dropping down to about 5 yards depth into the backside middle of the field. He will clean up any ball carrier trying to sneak out the back.

In pass coverage, they are looking for a deep release by the #2 receiver (eligible receiver counted from the outside inward to the center). If the #2 releases deep, deeper than about 8 yards, the safety will typically run with him and play essentially man coverage on him. This sort of match up zone is why the cover 4 plays very much like a man coverage, and makes it so many big miss matches, like 4 verts, are negated. If no #2 releases deep, the safety will likely either continue his drop into his zone, or slide over to double #1, preventing any post routes. He must also keep his eyes running deep crosses from the other side, as the LBs likely won't be able to get enough depth to cover this route and the WR will run off the CB.

The CBs, in most cover 4s, will be a bit softer. They will play a hang coverage and keep their eye on the QB, reading the drop to hint at the route. There are several pattern read schemes that some teams run, but for now, let's assume that the CB will stick on the #1 receiver, deep or short, unless the initial release is a shallow cross, in which case they will release to the LBs, quickly gain ground backwards in anticipation of a corner route coming behind them. An example of this can be seen here. watch the corner at the top of the screen:

We discussed run fits last time, so we'll focus on the pass responsibilities. The OLBs will read the QB, and if he opens his hips the OLBs will find the #2. The goal will be to play #2 reciever to the flat if #2 goes deep. The exception is when #2 quickly crosses, at which point, once the OLB determines it isn't a slant, they will release to the MIKE and look for the #3, either leaking out of the backfield or coming back toward him from the inside/other side.

When covering the #2, the key is to stay on top and outside of him, sticking to his upfield shoulder. You play outside because your help is inside; the flats are a weakness of this coverage. If the #2 goes downfield, the OLB will continue onto the flat.

The MIKE will take the #3, and if there is no #3 will zone drop and wall off any shallow crosses. The MIKE won't break the hashes until the QB does, at which point the MIKE will ensure to get in front of the QB to prevent the scramble and apply pressure.

The Difference for MSU

Let's start by going back to Pat:

MSU's CBs play soft about as close to 0% of the time as you can. This 10 yards off business, it doesn't apply. Simply playing hang coverage, nope not that either. MSU lines up as tight to the LOS as they can. If the WR is split closer to the sideline (draw a line half way between the EMOL and the sideline, if he's outside that), then the CB will line up inside. If he's inside that line, the CB will line up inside. He will then proceed to press cover.

Why do they do this? Well if a WR is lining up further outside, it's typically because he wants to open more space toward the inside. If he lines up tighter to the O-line, it's because he's opening space to the outside. So MSU's corners are walling off where the WR likely wants to go.

Most people have a misconception of press coverage. They aren't going out there simply blocking the WR. The first step will merely be a denial step, a nearly lateral step in the direction the CB is walling.

If the WR is releasing outside, the CB will then deliver a hand shiver with his inside hand up and under the WR as he comes off. The CB doesn't attack the WR, instead he waits for the WR to commit and then cuts off the path to any deep route, keeping the outside shoulder in the WR's chest and mirroring along the side of the WR. The jam is then made to knock him off his stride and the CB works to cut off any outside release that may be attempted. Against an inside release, the CB will jam with the outside hand and play the low shoulder and outside if he's inside the numbers.

If you look at the top of the screen, the WR is lined up tight, and therefore the CB is pressing outside. But on the bottom of the screen, you see the WR split out wider, and the CB playing inside of him. 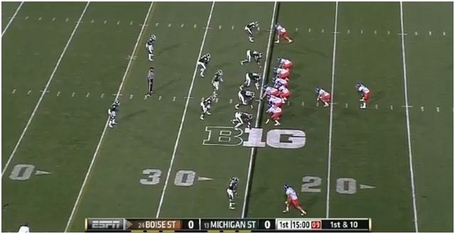 Some teams will run more pattern recognition concepts than others. MSU really doesn't run as many. Because the corners press the outside receiver, they can't spy the #2 from their hang coverage as they check the QB. This means they can't release the #1 to the safety and break on #2 out routes.

But, I did describe earlier how any shallow crosses are passed on in the zone. But that is one of the few pattern recognition adjustments they make during the play. Though, there is another recognition play that involves the safety against run plays. That is the crack replace. If a WR cracks down on an OLB, a safety will come up and replace on the edge so that gaps are still filled.

Another recognition change they make is nub side coverage (as described in the Narduzzi clip above). If a team doesn't have a WR to a side of the field, the corner and FS will check to a cover 2. This allows the corner to be the more aggressive player and hold the edge against the run. It also makes for easier route pickups, as the tight formations tend to have a lot of pick and swapping patterns. The cover 2 negates any confusion that may come from that and gives the defense easier reads. 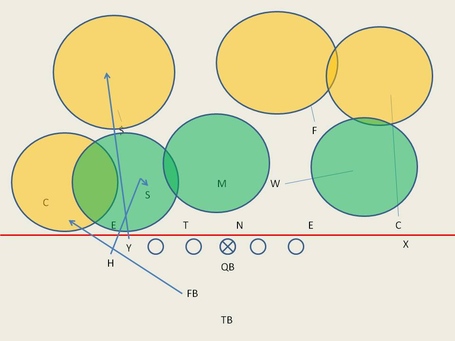 Note on the near side of the field. Here the CB is clearly has force on the edge, as he bites up on the run action before retreating to the flat.

They also adjust against spread teams, mostly by splitting their LBs out. MSU actually calls their WILL "Star", which is a fancy word for a safety/OLB hybrid. Lined up to the weakside, away from the TE, he's more likely to face a slot, and have to cover him. The WILL will split half way between the EMOL and the receiver, keeping his principles work the #2 until deep and then undercut in the flat. 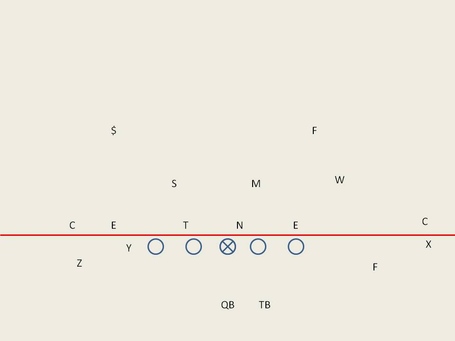 MSU will also adjust to motion. Against inside motion (say a slot of TE), they will just rotate their safeties and LBs accordingly to maintain the principles set out above. If the motion stays on the same side, the OLB will maintain slide to maintain his position half way between the slot and EMOL. The safety will maintain his proportions as well. If the receiver crosses the formation, the LBs will bump, and the other OLB will bump outside, the MLB over to where that LB was lined up, and so on.

However, if the offense is in a one back formation and a single receivers crosses the formation, the CB will follow. This is because bumping LBs could cause confusion, and also puts two pass coverage defenders for one TE, and therefore becoming undermanned to the direction of motion, while also becoming very weak against the run toward the TE side. 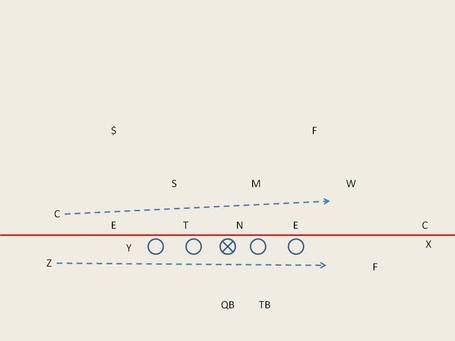 So now it is understood how MSU affords to be such an aggressive defense. The combination of a 4-3 over and a cover 4 allows safeties to support in the run and also gives the LBs relatively easy pass coverage responsibilities. This means that they can play downhill run first, while keeping tight coverage on the outside. There are weaknesses to this defense, and if you watch film you will see defenses try to attack those weaknesses often. However, MSU runs their defense to force offenses to execute in order to be successful. The fact is, at the college level, consistent execution is very difficult, and this is a big reason why Michigan State has been so successful on defense.