Another quietly steady class for Michigan State and Dantonio, but can it compete with the rising crust of the B1G?

Welp, another year with Hoke and Meyer at the helm, and Michigan State continues to slip back down the totem pole after a spectacular few years at the top. It's not all bad, of course- MSU's usually going to stick in the upper half of the conference with Wisconsin, Penn State, and Nebraska, but the edge they held that allowed them to compete with Notre Dame, Michigan, and OSU for a few years on the recruiting trail has really slipped.

Of course, that doesn't necessarily mean the class isn't good, moreso that the struggled to win one-on-one recruiting battles with the bigger schools as they had in previous years for the likes of Lawrence Thomas, Will Gholston, Max Bullough, etc. For example: In 2010, Michigan State landed 5 of the top 10 players in the state of Michigan, beating out the likes of Notre Dame, Michigan, Ohio State, Alabama, Florida, and USC for kids. This year, only 2 of the top 10 players in the state are headed to East Lansing, and Dantonio only had to fight off last minute fleeting overtures from Michigan to keep their signature.

However, like South Carolina (and Minnesota??), Michigan State has become quite adept at figuring out which players fit their system and turning them into turf shredding monsters...at least on the defensive side of the ball. Naturally, the strength of this class lies on the defense. MI LB Jon Reschke was a top 150 player nationally that should thrive in Pat Narduzzi's system. OH LB Shane Jones is slasher in the mold of James Ross who also received national attention. OH S Jayln Powell has speed to burn and should be another pesky deep man in a few years. OH CB Darian Hicks is a physical coverman who should shine once coached up, and PA ATH Delton Williams could turn into a monster linebacker when he adds weight and experience.

However, when you look onto the offensive side of the ball, all you can see is Damion Terry. The Pennsylvania gunslinger looks like a legitimate option to replace Andrew Maxwell once he leaves, based off of the hype he's been receiving. He's a very different kind of quarterback from the ones we're used to seeing in East Lansing (Jeff Smoker, Drew Stanton, Kork Cousins, Andrew Maxwell, even Connor Cook); his primary strength is his athleticism, although his arm certainly isn't anything to mess with. Like Shane, you wouldn't want him starting any time soon, but the upside is palpable.

Although the rest of the offensive class isn't too exceptional, there are two other notable prospects in this group; MI OT Dennis Finley was a late riser from Cass Tech who eventually chose Michigan State over Ohio State. MI RB Gerald Holmes doesn't exactly blow me away on tape, but his story truly is something special, or at least heart warming. Here's a little snippet, but I encourage you to read the whole thing.

These may sound more like the activities of best friends than a father and son, but that's what separation, reunion, cancer, suicides and the hard questions that follow can do to bring two people together.

"His dad has been the rock in his life," Michigan State coach Mark Dantonio said of Gerald Jr., who will compete as a freshman to start at running back for the Spartans this fall. "You can see it's a special relationship."

This week, as a bit of a special treat, we have a guest contributor from our sister SBNation Blog, TheOnlyColors, Mike Wilson. Mike's a friend and an excellent follow on twitter, notable for good, well-reasoned discussion.

LB Jon Reschke - The Brother Rice product has long been thought of as the heir apparent to Max Bullough for the Spartans. As Bullough enters his senior year, Reschke will be groomed to take over in the same way Bullough was -- special teams and reps as a true freshman. Between Reschke and Cincinnati Moeller linebacker Shane Jones, one (or both) will see the field this fall.

RB Gerald Holmes - No running backs emerged this spring and the battle in the backfield will remain wide open in East Lansing come fall. Holmes is one that will be added to the mix. The 6-foot-2, 215-pound back averaged more than 10 yards per carry as a senior and provides the big, physical back that the Spartans love having.

ATH Delton Williams - A second option in the backfield come spring, Williams provides so much versatility that he was playing seven positions in practice before the Big 33 Classic. His future might be brightest on defense as a linebacker, but he is no slouch on offense, either. His career will start by being in the mix the other true freshmen backs Holmes and Beaver Dam (Wisc.) RB R.J. Shelton.

K Michael Geiger - Rated as the No. 1 kicker in the nation by Rivals, Geiger could have an immediate impact. The battle for starting kicker didn't find a conclusion this spring, as senior Kevin Muma seems destined to remain as a kickoff specialist. Geiger should have a shot to have immediate playing time.

CB Justin Williams - This is a stretch among this group, as the reality is, MSU doesn't have a lot of holes that a freshman can fill quickly (cough offensive line), especially on defense. Williams could fill a hole in special teams, which has been pretty stale since the graduation of Keshawn Martin. Williams ran a 10.88 in the 100-meter dash and 21.76 in the 200 as a senior and could provide the speed and electricity the Spartans need on special teams.

QB Damion Terry - Where else would this list start? It was a challenge not to list Terry in the immediate contributors, but this year his best bet would be to redshirt. Although, there have been rumblings that the staff has told him to be ready to see action in some spread sets. This much is known: He is expected to be the future at quarterback in East Lansing. When Andrew Maxwell graduates, Terry will be in the mix to start. He threw for 50 touchdowns and 3,600 yards as a senior, while running for 12 scores.

OT Dennis Finley - A big pickup because of the Cass Tech connection, Finley will be a player the Spartans might need on the field in 2014. With the injuries that have hurt the MSU O-line, it is possible the Spartans won't return a starting OT next year and Finley will need to step in. He has the frame, just needs to put in the work. He was the lone offensive lineman in the 2013 class, which adds even more necessity that Finley is a big contributor.

DE Demetrius Cooper - Cooper and Finley both impressed the staff at Sound Mind Sound Body last year, leading to offers and commitments. Cooper is raw , but at 6-foot-6, 225 pounds, he has the size that the staff wants in a defensive end. He only played one game in his senior year because of teacher strikes in Chicago and transfer rules, but a year in the weight room and coaching, he is a player with a very high ceiling.

LB Shane Jones - Jones could play early, but it is certain he will be a great player at linebacker for Michigan State moving forward. He comes from the Moeller program, which puts out well-coached and solid players, so he could be a player that is hard to keep off the field.

WR Trey Kilgore - Kilgore is an intriguing prospect, he played a lot of quarterback at St. Xavier because of his speed and talent there, but his college future is at wide receiver. He played the WR spot exclusively his senior year, but missed time with a foot injury. Reality is, not a lot has been seen of what Kilgore can do, but what is known is he can flat out fly and has the size to be a viable option at WR moving forward.

Michigan State didn't finish at the top of the B1G by any means, but some of that can be contributed to the small class size. Their class average (.8584) blows all previously reviewed teams out of the water, although it's well short of Michigan's .9103 average.

State's top commitment (Reschke) would have been good for fourteenth best in Michigan's class, behind Jake Butt. The second best, Damion Terry, would also fit there. State's class features 5 kids that are ranked in the top 500 nationally, accounting for 29% of the class.

The state breakdown for MSU is also interesting, as all but three members of the class come from states in the B1G footprint, the rest from Florida. As far as recruiting nationally goes, this is probably the least diverse class in the B1G that we've reviewed so far.

--> Several Michigan recruits from this group. Shane Jones held a Michigan offer when he committed to MSU, while Dennis Finley and Jon Reschke were offered after they decided. It was reported that Jalyn Powell held a UM offer as well, although that turned out not to be true. CB Darian Hicks received brief interest from Michigan.

--> State's struggle to claim the top prospects in Michigan has once again surfaced in 2014. The only two prospects they've nabbed that rank among the best ten in the state so far are Deon Drake and Riley Bullough. Although Drake did have a Notre Dame offer, neither of the two were offered by Michigan. They also lost top instate WR Drake Harris to Michigan, and whiffed on 4*s Lawrence Marshall and Damon Webb, both of whom held the green and white in high esteem. 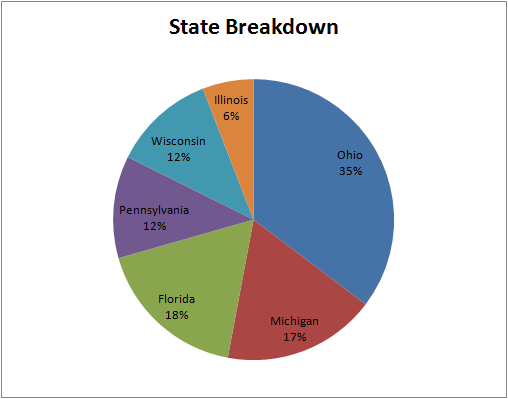 With Michigan, Notre Dame, and Ohio State on the rise, as well as Wisconsin and Penn State on the rebound (sorta), it's hard to imagine Michigan State routinely sitting at the top of the recruiting rankings. However, they've become quite adept at finding great athletes and developing them into better football players, especially on the defensive side of the ball. This class might not blow you away on paper, but their staff does their best to maximize talent; by retaining it, training, and developing it.