Like Illinois, the IU coaching staff managed to shed negative publicity surrounding a couple of rough years en route to a historic class. Just what is that class made of, and how do they compare to Michigan?

Indiana is a basketball school. That's a fact that's been made clear for years and years to fans, alumni, and especially the football team. Nowhere is that more evident than the Indiana blogosphere, where a google search for "Indiana 2013 Recruiting Class" will yield 12 results about the basketball team (and an OL) before even broaching the subject of Kevin Wilson's historic efforts culminating in their record-breaking football recruiting class. It's the same reason our sister SBNation Indiana blog, Crimson Quarry, had but a couple of short blurbs on the recruiting class come signing day. More importantly, it may be the reason that perennial basketball powerhouses like Duke, Kansas, Indiana, Kentucky, and Duke have consistently struggled over the years to play second dog to their basketball powerhouse programs.

But it's also a notion that Indiana Coach Kevin Wilson (and Kentucky, for now) has ignored en route to securing the best football class Indiana has seen in the past decade. Couple that roadblock with a combined 5-19 record during his tenure and what Wilson has done seems nothing short of miraculous, but it's really nothing more than understanding what makes prospects tick; momentum.

There's a reason that Ole Miss ended up with Laremy Tunsil, LaQuon Treadwell, and Lavon Hooks in the class, and his name is Robert Nkemdiche (by the way, I understand he didn't officially commit until NSD, but everyone knew where he was going from about mid-November on).. In recent years, with an increasingly strong network developing between recruits due to the thriving camp scene and social media, coaching strategies have similarly shifted. It's something you could see develop last year as Michigan's 2013 class camp into shape: Get a few of the guys leaning towards you to commit (Chris Fox, Shane Morris, Jourdan Lewis, Wyatt Shallman), rally that into commitments from more torn prospects (Kyle Bosch, Dymonte Thomas, Taco Charlton, LTT), and all of the sudden, anyone else looking at Michigan sees the strong contingency they'll be paired with. The examples of this happening throughout college football are virtually endless.

Sometimes, that can mean getting a core of talented prospects (Michigan), and sometimes it means landing just one (Ole Miss). In Indiana's case, the domino effect from getting just one commitment was staggering. When IN WR Isaac Griffith made his decision for the Hoosiers, he then began talking up Ole Miss commit Antonio Allen in a camp setting. With time and continued effort from the staff, Allen decommitted from Ole Miss and decided for Indiana as well. Joining him was in-state S Chase Dutra, a lightly recruited kid from Brownsburg. At that point, there were two other big in-state prospects committed to B1G schools; Darius Latham to Wisconsin and David Kenney to Iowa. We'll let the Indiana Daily Student take it from here.

The trio of Dutra, Allen and Griffith then shifted its collective effort to switch Kenney and Latham to the Hoosiers. Griffith and Dutra took to social media, aiming to create needed buzz for IU football. Both started mentioning Latham and Kenney in their tweets. Fans caught on and did the same, although fans are not allowed to influence recruits per NCAA regulations. Soon after, a movement was started to get the Indiana prospects to play their college football at home. All the while, Dutra and Griffith befriended Kenney, attending games with him and persuading him to change his commitment to the Hoosiers. Kenney, Latham and Allen were all friends prior to their senior year of high school.

On Oct. 14, Kenney announced he would no longer attend Iowa. Less than 24 hours later, Latham decommitted from Wisconsin.

One week after he left Iowa's recruiting class, Kenney committed to IU. He became the second four-star recruit in the Hoosiers' class, ranked as the No. 244 prospect in the nation.

As in-state recruits made the move to IU, out-of-state prospects took notice. On Oct. 24, four-star athlete Rashard Fant from Fairburn, Ga., committed to IU instead of Florida State. His reasoning in choosing IU over a program like FSU, a school that is closer to home and far more successful in football, was simple. "I wanted to go somewhere where I could build a program, get a great education and make a difference," Fant said. "I wanted to help a school not known for football and put the name on the map."

One month after Fant committed, Latham made the decision to join the Hoosiers' recruiting class.

The main difference between this Indiana class and the one that Northwestern is putting together for 2014 is that this class really hit on their needs. Northwestern's three blue chippers are all at positions that Northwestern has produced a lot of success the past few years; RB, WR, and QB. For Indiana, the defense has bled heavily in recent years. This batch of recruits is a huge step towards fixing the leaky defense that ultimately prevented them from closing out victories against Ball State, Michigan State, Ohio State, and Navy; games where the average offensive output was 36.25 points. Allen, Kenney, Fant, and Latham are all upgrades at positions that desperately need a boost in athleticism.

DT Darius Latham. The highest rated prospect in this class, Latham also comes in at a position where two senior starters leave the Hoosiers. As of right now, they plan on leaning on Sophomore Alex Todd (a 2* snatched from MAC schools) and RS Freshman Ralphael Green, who I was actually a pretty big fan of last year. However, Green is not the same type of player as Latham, and Darius would be a huge upgrade athletically on Todd. If he puts his nose to the grindstone and commits himself during camp, I think he could be a starter by the time B1G play rolls around.

S Antonio Allen. I know, I know, easy pick. While Indiana actually has two returning starters at the safety position and a good deal of experience between the two, Allen would be a big upgrade athletically on both, and they'll probably give him playing time in the hope of grooming him to replace outgoing SR Greg Heban.

CB Rashard Fant. Again, it's all about injecting athleticism into a squad that ranked 98th in pass efficiency defense last year. Fant is very much still a raw athlete, but CB is one of the easier positions to ease into.

DT Christopher Cormier. A JUCO transfer, Cormier will look to make an impact in the young interior line early in his career. Thankfully, this is not what he looks like. That's another Chris Cormier, one who will emasculate you as soon as his likeness pops up in your google search. This Cormier is a surprisingly explosive athlete for his size (315 lbs), although his production at his JUCO is a bit suspect (just 3 TFLs, all of which are probably on this short snippet from IU).

LB Steven Funderburk. He still looks like more of an athlete than a true linebacker, but I think he's good enough to justify cracking Indiana's rotation. Although Indiana's actually fairly experienced at this position, returning 3 guys with starting experience at the top of the depth chart, Funderburk could probably be utilized in nickel sub-packages because of his athleticism. Oh, and he has one of the most terrifying hits I've ever seen in his tape. (Seriously, watch it).

DE David Kenney III. I actually wanted to put him in the quick contributors part, but I'm trying to limit myself to five each. Either way, whether it's now or next year, Kenney will make an impact. He's the long, athletic type while already weighing in at 250 pounds. There's the normal "he's a young lineman" nit-picky stuff and his ceiling isn't as high as some other pass rushers, but he'll be an upgrade for Indiana.

RB Laray Smith. A one-cut-and-go type of running back with speed to burn, Smith has a bright future ahead of him in Indiana's system. With a lot of returning experience at the position, he probably won't be threatening anyone this offseason, but he'll be in the mix down the road.

OL Maurice Swain. A talented athlete stolen from the heart of SEC country, Swain brings a lot of upside to Coach Frey, a man who Michigan fans know can get the best out of him. Standard statement about being a freshman offensive linemen are relevant here.

LB Clyde Newton. Another quality athlete that could also play running back, Newton has a long way to go before he really gets a feel for the linebacker position. When it comes, he'll provide a quality option for the hoosiers.

You guys know the drill by now.

Also of interest, at 73.63 inches (6'1) and 228.25 pounds, the average Indiana recruit is also the biggest of the three teams we've studied so far. While adding athleticism, Wilson has also injected his squad with a bit more size.

The average Indiana commit has a .8307 247 composite score, but this class also features 5 top 500 players (21%), and 3 top 300 players (13%). Again, the top crust of this class, if they pan out, should enable them to compete with the Michigan States and Nebraskas of the world.

--> Darius Latham was heavily recruited by Michigan early on in the process. At one point, it was hoped he would be a member of Michigan's class, but then the relationship fizzled and he ended up at Wisconsin.

--> Michigan actually didn't recruit many other members of this class, although I'm sure they would have looked at Antonio Allen and David Kenney if the space was there.

--> I haven't talked about him much, but perhaps the most shocking member of this class is 4* WR Taj Williams. Williams waited until after NSD to make his decision, then chose the Hoosiers over (at one point) Alabama, Florida, Florida State, Ole Miss, Notre Dame, and Lousville. Make no mistake about it, I think he'll contribute, I'm just not sure what position I see him fitting in right now. But the point is..

-->...With Williams, Fant, Swain, and RB Daryl Chestnut, Wilson is quickly becoming one of the B1G coaches most adept at swiping SEC talent out of their own backyard. Throw in Antonio Allen, who was committed to Ole Miss, and you get the picture of a dude not afraid to go head to head with SEC schools with a 5-19 record. That's probably the most remarkable thing to me about this class. It remains to be seen whether Wilson can make that a consistent trend or not...

--> ...Although so far the 2014 class hasn't supported that idea so far. They just recently picked up their first commitment from DT Mike Barwick, an undersized tackle who chose IU over the MAC. Based on what we're seeing now, the 2014 class looks like it'll be without a 4*. Can Wilson change that? It only takes one kid... 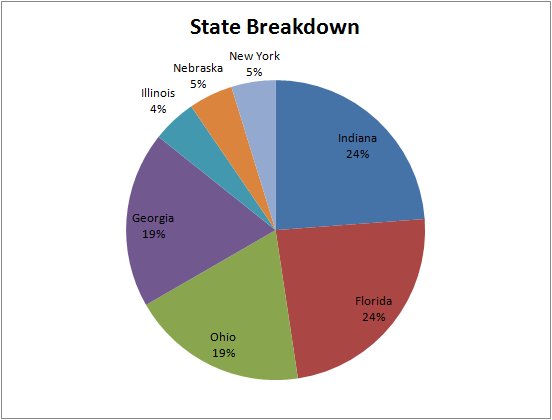 After a couple of years of mediocrity both on the field and recruiting trail, Kevin Wilson somehow battled SEC schools to pull in a historic class by Hoosier standards. This third year, however, might be the make or break season for his tenure. With that in mind, we might get to see some of this young talent injected early. The question is, if he leaves, will they also take the next train out of town and leave IU fans wondering, what if? And will Wilson make this type of class a consistent result, or are more likely to see regression to the mean over the next few years?