Inside the Playbook - Roll Outs and Sprint Outs - Part I

Inside the Playbook is an in-depth look at Michigan's football team. Looking at scheme, technique, and concepts, this chapter is the first, and looks at the most common sprint out play deployed by Al Borges and Co. - Outside Hitches. Take a look inside what it's like to have to process everything it takes to run one of the simpler plays in the playbook.

Share All sharing options for: Inside the Playbook - Roll Outs and Sprint Outs - Part I

With Denard Robinson under center, all Borges called very few sprint and roll outs. There were several reasons for this: 1) Denard struggled getting his shoulders square and getting proper stride with his steps, which caused his throws to sometimes dip, more often sail, and rarely land on target; 2) because Robinson was such a successful runner, teams would quickly react to the outside threat and rush Shoelace, which 3) perhaps cut down on the high amount of static bodies in his passing lanes, but gave way to a higher frequency of dynamic defenders in his field of vision, which Denard already struggled with because 4) he was short, and when he scrambled he tended to throw from an even lower trajectory; with guys in his face it became difficult for him to get the ball to receivers. So sprint outs with Denard wasn't a very successful proposition.

But with Gardner it becomes a much more profitable set of play calls. Devin has better footwork and a stronger arm than Robinson did. He's also taller and can scan the field better. An accomplished runner himself, he isn't nearly the fear-of-God that Robinson was with the ball in his hands. So while still a threat to take off and pick up crucial yards, defenders are not so quick to commit to attacking the line of scrimmage, and if they did, DG has the capability of beating them over the top.

In this segment of "Inside the Playbook", I'd like to look at a series of simple plays in which the QB gets out of the pocket and what the plan of attack is for Al Borges and DG when calling these plays. This chapter will likely take three parts, so come back in the near future to get part 2.

Let’s start with the very basics, shall we. In the next series of figures you’ll see a variety of formations. In reality, pretty much any formation can be used, as long as you can quickly get two receivers in front of or even with the QB. And the only difference between shotgun and under center is the angle the QB takes to get his depth. From under center, it’s about a 60 degree angle, obviously shallower out of the gun. On sprint outs, typically that depth is between 5-7 yards. On roll outs, it usually gets a bit deeper, to about a 8-9 yard arc. The deeper of these distances is typically for when the QB is working toward his non-throwing hand. The QB has to work on an arc, threatening run initially, and then getting his shoulders turned back perpendicular to his target, as he can’t really throw it over his shoulder, and if he throws it across his body (right handed QB’s shoulders pointed to the sideline) the ball will sail. Once he can get his head turned, he needs to identify and read his movement key (flat defender typically). The ball should be held in two hands, swinging high in front of his numbers, with his throwing elbow higher (about nipple height or a little higher). His feet need to work in a manner in which to allow him to throw the ball immediately at any time, and by around the time he reaches the playside TE, his hips need to be working downhill. Once the QB throws the ball, he still needs to finish technically sound, with his thumb down and palm out with his hand still landing on his throwing arm side (across the body is known as a baseball throw, but is much less accurate and powerful in football, as it doesn’t allow for a clean spiral).

On the playside (roll side) of the line, the linemen (as well as playside TE) will all slide to the gap toward the roll. That means the center will slide to the call, and block the front side A gap (between OC and OF). The playside OG will slide to the call and protect the B gap (between OG and OT). And the front side OT will reach into the C gap (between OT and TE). The playside TE (or if there is no playside TE, the extra front side blocker) will get to the outside to the D gap (outside the TE) and attempt to cut the first defender he sees outside the playside OT. This is because that defender is the most immediate threat to the QB, not only to tackle him, but to obstruct his passing lane. Getting this guy to the ground at least temporarily is extremely helpful, at least sealing him is a requirement. If this guy can keep the QB in the pocket, the timing is immediately thrown off, the QB is forced to step forward, at which point the throwing angles are no longer set up properly and other defenders are breathing down his back.

On the backside, each member of the line will slide to the call and protect the gap towards the play. If no one is there, down lineman or blitzer, they hinge back, and form a sort of wall on the back end of the play. The backside extra blocker will block the B gap out. The intention is always to work inside out on the backside, as the guys inside are a more immediate threat to chase the QB down from the backside.

This is a standard look at blocking 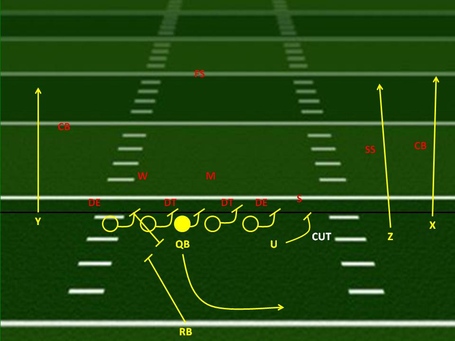 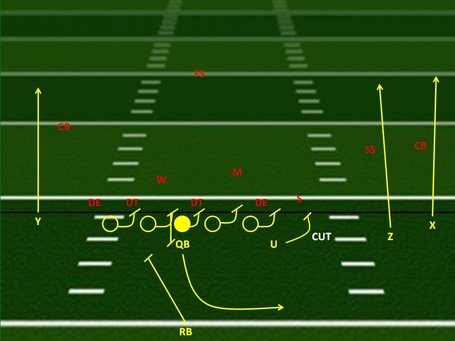 Lastly, with a blitzer 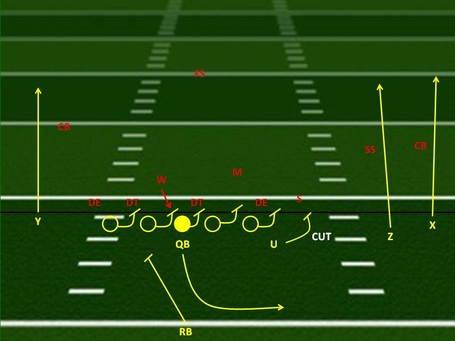 Before the offensive line, QB, and extra blockers have time to work in unison and do their thing, more accurately, prior to the snap, the QB has several reads. His first read will always be to find the safeties, and try to get a good idea of whether it’s an odd coverage or even coverage. Underneath, particularly with the use of motion and pre-snap defensive alignment, the QB will get a feel for whether the defense is running man or zone. He will identify if anyone is uncovered and find where he believes his passing lanes are, and then and will attempt to find his movement key. All this is done pre-snap. 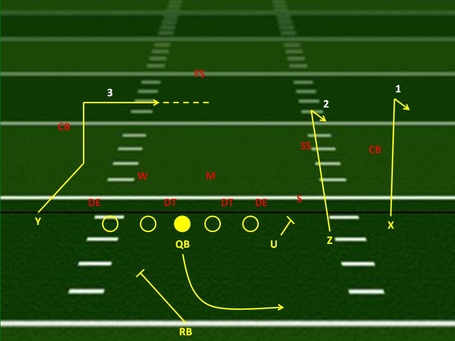 Now the exciting part, what the WRs do, the QB reads, and moving the chains. The most basic sprint out is a combination of outside releasing hitch routes (also referred to as hook, curl, come back, and cob route, though technically and originally most of these were variations of hitch routes) on the front side. The backside receiver will run a dig route, crossing in front of the safeties and behind the LBs. You can adjust the play based on the situation (need 6 yards, run 8 yard routes, need 10, run 14; the route can be run up to about 17 yards). The QB, once he verifies his movement key, will typically want to work his eyes in one direction. In this case, because he has to flip his head around, he will tend to scan from the outside in.

The first thing the WR must do is identify the type of four basic coverages: 1) Retreat coverage is your typical loose coverage where the corner plays off; 2) Engaged coverage is tight coverage where the corner is riding on the inside hip of the WR and flipping his hips immediately; 3) Bump coverage is your bump and run coverage, where the corner is attempting to redirect the WR, throwing off the timing of the play (along with other benefits if done correctly); and 4) Hang coverage, where the corner ‘hangs’ outside of the receiver, keeping his man between himself and the ball. Once the coverage is identified, the receivers will adjust the initial track, or path, of their hitch routes accordingly, but the same basics still apply to the outside hitch route. The receivers will drive to the outside hip of the defender, selling the streak by bursting hard and forcing the defender to flip his hips and turn and run. Once he has pushed the route vertically, he will drop his shoulders and sink his hips three or four steps, before planting off his inside foot and breaking back at a 45 degree angle. He must accelerate out of his break and continue to work his way back to the ball. They will be wanting to seal the cover man on their backside and continue to work back and toward the sideline into the open field.

Note on the video that the guy that I’ve listed as the extra backside blocker is actually releasing to the playside and sealing inside. This is a slight variation, and an adjustment that can be made by the QB pre-snap once he reads the defense’s pre-snap alignment. The backside fails to adequately wall off the pass rush, and the front side allows defenders to slip through and pressure DG. But not in the close up at the end of the video how Garner is able to flip his shoulders and still make an accurate throw. While not perfect execution of a throw, he was able to put it accurately and give the WR a chance to make a play.

As I said, one of the QB’s pre-snap reads are the safeties, particularly the strong safety. If the QB reads a 2-high defense, he may want to quick progress. By this I mean he wants to work through his progression quicker than usual, and rather than giving his playside receivers time to work their way open, the QB will want to plant and find the third receiver in his progression. That is because this backside receiver is going to find an opening in the defense and sit in it. With the sprint out, it is highly likely that the LBs will chase the initial movement and blocks as they are taught to key. This leaves a fairly large window between the two safeties for the Y-receiver to fill. 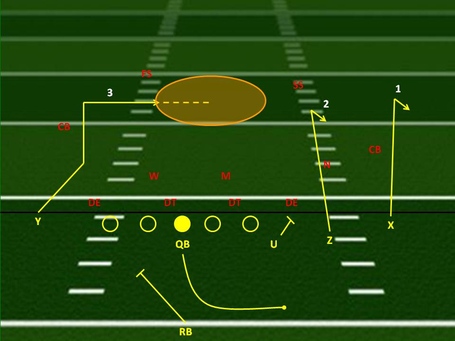 It is important that the QB resets his feet rather than trying to throw the ball off the run across his body. If he doesn’t reset, his momentum will typically cause the ball to drift in the direction of his roll, and by throwing across his body the ball will typically flutter and float, giving someone on the defense an easy interception.

Up next we will look at some of the adjustments that will be made for over aggressive defenses. We will also analyze several of the other typical route combinations employed with the roll out package. After that we will examine some of the tricks Borges has up his sleeve to take advantage of cheating defenses. Hope you enjoyed!