Inside the Playbook - Roll Outs and Sprint Outs - Part II

Previously we discussed some of the basics of this package, this time we look at some of the adjustment Al Borges and company will make to give the defenses different looks.

Share All sharing options for: Inside the Playbook - Roll Outs and Sprint Outs - Part II

Introduction
Last time we looked at the basics of the roll/sprint out. This time we are going to look at a variety of plays, and a few more adjustments that Michigan may make when certain situations present themselves. You'll notice a lot of things, such as the blocking, remain fundamentally the same.

Hitch... and Go
So what happens when corners start peaking into the backfield, sitting on the hitch route ready to break? You hit them with the hitch and go. 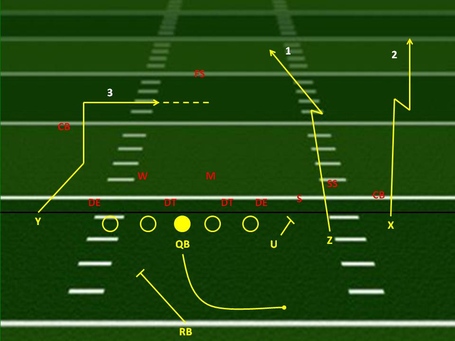 The key here is for the WR to sell the hitch. To do this, they act as if they are running the hitch, up to and including lowering the shoulders and sinking the hips. Look back over the shoulder a little bit, then explode out of your position to run the go portion.

Here, the inside WR is running a post. It is fundamental that he crosses the safety's face, whether that's the SS in a cover 2 or the FS in cover 1 (assuming the FS is still dropping). The reason for this is because he has to draw the attention of the safety. He has to make the safety decide between the post and the go.

The outside receiver will also fake the hitch, he then needs to get back towards the outside edge of the numbers to give the QB room to make the throw (and so the WR has room to work back to the ball if he is still covered).

The backside receiver is still running his dig route. Note previously that I said the inside WR must cross the FS face unless the FS isn't dropping. That's because the FS is being tempted by the dig route. If he breaks up to help cover the hole in the defense, the post behind him should be wide open.

As for the QB, he's going to want to arc more, or roll out, rather than sprint out. This is to give time for the play to develop. It also gives him time to reset. The first read must be the post. This is because you are attempting to draw the defense away from the sideline, particularly that safety. Before throwing, the QB needs to reset to make a good strong throw and threaten the center of the field.

Note here that the blocking is better than on the clip I posted in the previous part. The correct people hinge as soon as they know they won't be presented with a defender, and the rush is picked up. However, Gardner does a poor job getting his shoulder turned. His footwork lapses as he sees his man become wide, wide open. When he releases his past, he is flinging the ball across his body. This causes the ball to flutter, float, and drift back inside, and the middle safety that the post receiver drew away from the play is almost able to recover and make a play on the ball.

Hook
We've looked at a bunch of roll out plays, let's look at a sprint out now. This sprint out is designed to give the QB a very easy and short throw for a first down, as well as allow him to threaten the edge and pick up yardage with his legs if need be. 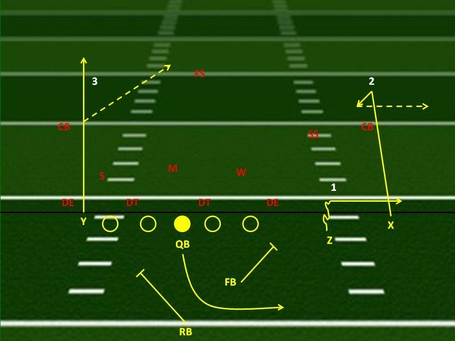 The aiming point for the QB is now a little shallower and he wants to get there a little quicker. Once he reaches the playside OT he is looking to throw the ball.

His first read is the inside WR, who can stutter, fight, or whatever off the line, but ultimately must gain outside leverage on his defender before accelerating outside on a shallow out into the flat. With such a short pass, if he is able to keep the CB on his back, the QB should fairly easily be able to complete the pass.

The second read will be to the next level. If the inside coverage guy sinks, the QB is alerted to the fact that the defense might be in a zone. He now has to watch for a corner breaking on the shallow out. But as long as he is alert, he'll be fine. On the next level, the outside WR is breaking back into the hole between the outside and inside coverage guy. He is forcing the outside guy into a high/low situation. This receiver is running either a hitch or an outward hitch, breaking away from his defender but ultimately working back towards the ball. If he doesn't receive the ball immediately, he begins working toward the sideline, again keeping the defender on his back and keeping out of the cluster of defenders sprinting that direction.

The other thing working toward the sideline does is open up a running lane for the QB. Realistically, with the shallow drop and sprint out, the third option here is for the QB to run. If a coverage guy is able to stick to the shallow receiver, and another to the deeper of the two, likely the defense is in man and DG would have a nice running lane to pick up some yards.

Note here, that initially the receiver motions across the formation. A defender quickly follows him outside and Michigan knows they have a great play call on. That's because Iowa has tipped their hand, they are in man coverage. The stack formation is helpful as well. The receiver on the LOS is allowed to gain outside leverage and essentially screen the defender following the motion man (Gallon) from even coming close to breaking on the out route on time. One of the few ways to stop this play out of man is to jam the out receiver at the line and not let him get into his route. Dileo works away from the defender out of the hitch initially, and immediately after not receiving the ball out of his break, works toward the sideline until he realizes the ball has already been thrown to the shallow receiver.

This is also a good example of the extra blocker picking up the D gap. The RT cannot make it out to the corner blitz, but the RB picks up the blitzer and turns him back inside.

You also see here as well that there is a shallow cross coming from the backside. It's possible that if a defender attacks off the D gap and takes a proper angle that the sprint out could be contained back into the pocket. More likely, he is attempting to cross a defender's face on the playside to help create a lane for Gardner to run if his first two options aren't open. This also gets another blocker to the side for the WRs to pick up YAC.

Another example from the bowl game.

The smash route is one of the most used in college football and in the West Coast Offense in particular. It's great against cover 2 because it puts the corner in a bind: cover deep or cover shallow. It's also great against man coverage, as detailed at Smart Football. 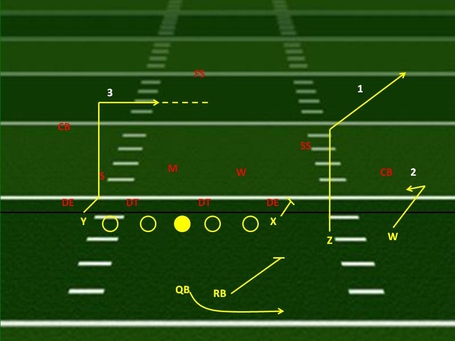 What I really wanted to show here is how sometimes there is a change in progression due to the side of the ball. Now, in all honesty, I have no idea if this is how Michigan works, but it's another adjustment that some teams make. 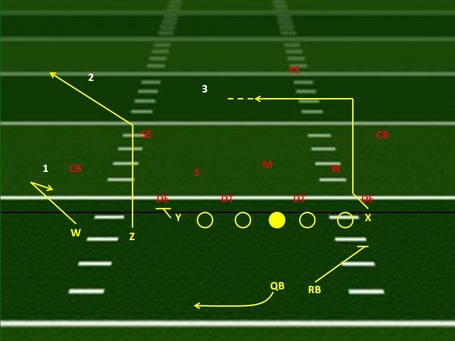 Notice these are the same play, but one is to the QB strong arm side, the other is a roll to his weak side. The difference: the read progressions. When the QB rolls right, he can immediately hit the deep receiver as his shoulders are in better position to make the throw. However, to the left side, if he is immediately pressured, he likely can't get his hips all the way turned, and therefore the shallow route is his primary option.

Here's an example of the smash route run against MSU.

Likely Dileo was actually open here. MSU ran their typical cover 4, and the corner began dropping. The safety to that side stayed inside to cover a middle quarter. Denard simply wasn't comfortable making the throw toward the sideline over the late dropping corner. This is a great play call in this situation, even with Denard, because if MSU is in prevent it is essentially 7 easy yards on the hitch. If they are in cover 4 or man it should result in a big gain to the corner route, or Denard gets outside and runs. Either way the ball gets to the sideline quickly.

What's Next
Well, if you think Borges is just sitting in his room, relaxing, and not designing all sorts of tricks to put up his sleeve to take advantage of things... you're wrong. We'll look at some concepts that put three WRs to the playside and flood the zones and take advantage of picks (or rubs as offensive coaches will tell you) to get guys open for easy pitch and catches. We'll also look at some great counters to defenses attempting to attack off the edge and flowing hard over the top to try to collapse the roll side of the field.