There are many odd and unique things about Northwestern. This year, maybe the most interesting is how their spread offense molds to their two very capable QBs. We go inside the playbook to see how Northwestern adapts to fit the strengths of their QBs.

Share All sharing options for: MnB B1G Preview 2013: A Tale of Two QBs

Introduction
There are many odd and unique things about Northwestern. They're the only team in the Big Ten that is private. They wear purple. Their home games are every other teams Chicago home game. These guys have been the most annoying team that hasn't been that good but somehow has been good over the past decade. They have two quarterbacks capable of starting... and they're nothing alike. I introduce to you: Kain Colter aka The Runner and Trevor Siemian aka The Passer. In the words of Vince Lombardi, "What the hell's goin' on out there?" Well, I guess I can at least try to explain some of their spread offense and how it starts to differ with their two QBs. The rest, well, not so much.

Anyway. The biggest change in the run game when Colter is in the game is that there is a run game. OK, that may be a stretch, but against Michigan with Kain Colter in the game, the play ended up being a designed run or a scramble over 80% of the time. The favorite style of play by far was the option; the specific play: the speed option. 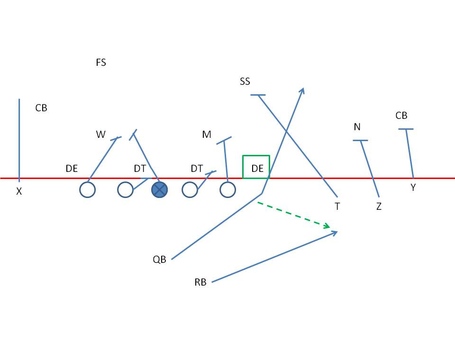 Here, at the snap of the ball, both the QB and RB are going to sprint to the outside of the field. The offensive line zone blocks, but leaves the playside EMOL free. The QB will attack the outside shoulder of the EMOL and read him. If the EMOL gets flat footed or attacks the QB, the QB pitches. If the EMOL starts cheating out, the QB will cut up between that man and the zone blocking of the offensive line. For the RB's part, he must maintain correct pitch relation to the QB. For the speed option this is about 1 yard deeper and 5 yards outside.

Another play that was featured with Colter only was the veer triple option, almost always run from the same exact formation out of a pistol set, and almost always with the ball going on the dive. In fact, I'm not exactly sure it was even a read, as several times keeping it would have been the correct read. Still, he did actually run through the progression at least once. 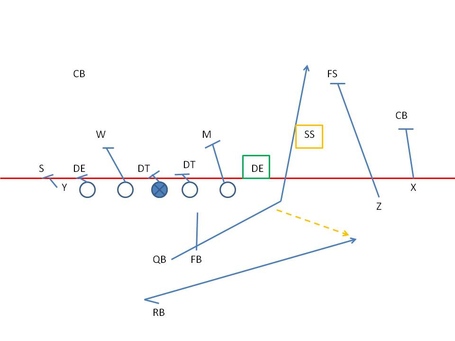 Here, I show the whole option so you get the concept.

Let's assume that the read progression is being made for now. Now let's number the box players, essentially the players lined up inside 8 yards off the LOS and not covering a WR. So typically, your DE, OLB, and SS. We will number these players 1, 2, and 3 from the inside out. #1 is the "read defender", #2 is the "pitch defender", and #3 is blocked. The QB will receive the snap and his first step will actually be away from the play and up. With his next two steps he will square himself to the sideline and read the #1. If #1 stays home, he gives the veer, or dive back. If #1 crashes, the QB pulls the ball from the belly and attacks the outside shoulder of #2. From there the play is much like the speed option. A difference is that Northwestern tends to inside zone block away from the option look.

These types of option plays are exclusive to Colter because of his legs. Siemian can execute the rest of the run game as well, which includes outside and inside zone reads and a true veer play.

The key is, with Colter in the game, the run sets up easy passes and makes defenses commit to the varied running attack. When Siemian is in the game, the run is used to keep the defense honest, with the RB and screens being used to attack the field from sideline-to-sideline, rather than the legs of the QB.

The Pass Game
Much like how the whole run playbook is open to Colter in the run game, and a portion of that playbook is available to Siemian, the opposite is true for the pass game. While the QBs are very different, the playbook doesn't suddenly get overhauled. The play selection, yes, but the actual plays and concepts are pretty much the same.

Note that I believe this was the only time Colter even attempted to throw a pass in the middle of the field. But this is the concept: 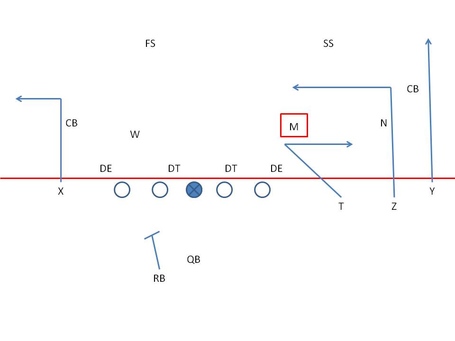 The play is picking on a single defender, the LB. The dip route (dipping into the middle before breaking back out into the flat) keeps the LB flat footed and respecting the shallow cross. The WR likely being quicker and having better acceleration, then gets an even better jump when he breaks back outside. Behind that play, a WR is running a dig route. The QB is simply reading that LB. If the window opens up between LBs, hit the dig. If the LB stays in his zone, look for the dip. Note here that if the SS begins cheating up on the dig route, the go route by the #1 WR can be adjusted to more of a post/seam route, and the QB can just move his progression down field to the deep receiver.

With Colter in the game, much like when Denard was in the game for Michigan, the pass game is mostly focused on the outside. This is because Colter doesn't really have the arm strength that's desired to throw the ball in the smaller windows. He also doesn't have the vision or height to see well over the middle. Instead, it's a lot of safe throws. Smash routes are used constantly because it utilizes corner routes that don't need to be thrown with a lot of velocity and hitch routes that can be shortened a little by half roll outs. Things that give Colter easy passes.

One thing Northwestern does is run a ton of rub routes to beat man coverage and then a lot of short and intermediate routes combined with quick, three step drop passes, to pick on zone defenders. Diagramed below is a simple hitch route. 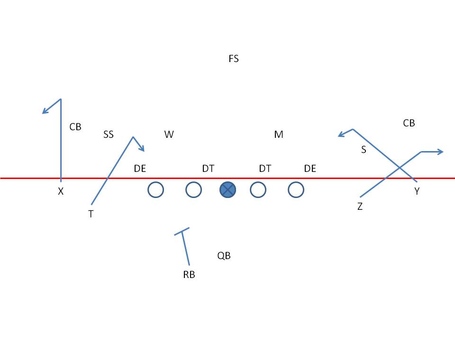 Rather than threatening over top of the safeties or attacking the field vertically with well timed throws put into small windows, Colter is really only asked to throw vertically with plays that are designed to get the defense out of position. Because they throw the ball short so frequently, defenses begin to undercut the flat routes and cheat on other short passes, what that tends to mean is you get hit with the wheel route. 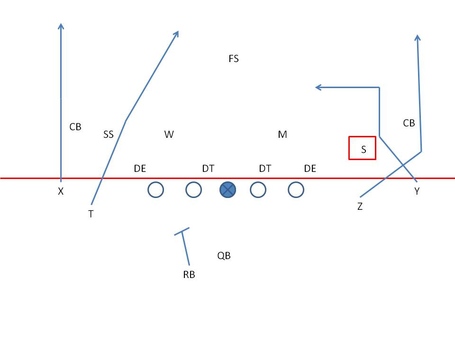 But with Siemian in the game, the whole field is open. The LBs are much more threatened to make correct drops and gain depth. The safeties need to gain correct leverage on receivers. Here, you see a LB put in a bad position, still have pretty good coverage, and still get beat. 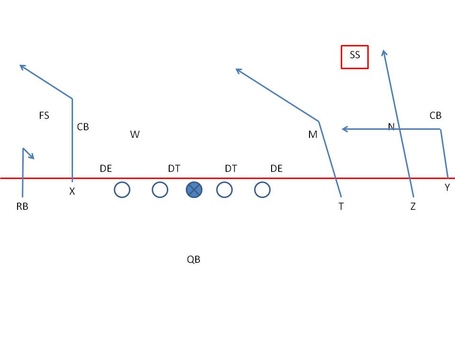 Here, the WRs are getting deeper than the LBs and picking on the safety. Motioning the RB out of the backfield essentially forces either a safety out of center field or a LB to cover a RB in space. To the play, the QB is reading the SS as the two posts split the safety. One attacks the middle of the field, the other the seam. Either way, in any sort of man coverage a WR will break open behind coverage. And, even if the defense backs into a zone look, the WRs will have cleared out the middle of the field for the #1 WR to run his dig route and settle in a void.

Siemian can also put velocity on the outside pass, giving him the ability to hit out routes and back shoulder fades. This is a very different way of spreading the field.

And even when the two run the same play, one thing you notice is that Colter is making one, maybe two reads, and then being told to scramble. He is often tasked with only looking to one side of the field, typically the side with the simplified coverage. In fact, the Siemian TD pass play above was also run by Colter in the game. But rather than look the safety off and then come back to the double post, Colter only read the opposite side before scrambling. The reason for this is three-fold: 1) because Colter doesn't have the vision to make good reads over the middle of the field; 2) he doesn't have the arm strength or accuracy to make the throw at a high enough success rate, without a just as likely turnover rate, to justify even attempting the pass; and 3) because he is a true threat with his legs.

Conclusion
These simple adjustments are interesting when taken over the course of a season, let alone a single game. Both QBs, perfectly capable of starting and having success at Northwestern, are working from the same playbook, but both with limitations. The whole run game is free-game for Colter, while the pass playbook is partially closed. For Siemian, the opposite can be said. Watching Northwestern has always been interesting, but watching how Northwestern molds their offense to fit their strengths of their two very good QBs should make for another odd and unique thing to look for from Northwestern this year.