Your Friday Drinking Instructions Are Called the Commissioner

YFD swings into Chicago for a Goose Island style review. Plus: Comparing beers to college players is back!

Share All sharing options for: Your Friday Drinking Instructions Are Called the Commissioner

I know it's a little silly to get carried away with football recruiting, but it's hard not to love statements like this, via MLive:

"Leonard will be a little tougher, but they call me the commissioner so I'm gonna put it out there right here on my blog: I'm bringing both of them."

This is from my new favorite recruit, Jabrill Peppers, who's pulling a Shane Morris and trying to recruit one hell of a class to Ann Arbor, including top RB Leonard Fournette and top DE Da'Shaun Hand. This probably won't happen, but it's pretty awesome that Peppers is trying. Recruiting is a snowball effect - the more talent you have, the more talent wants to come. (See: the SEC).

This week, we've been looking at Northwestern, a recently explosive offense with some major injury issues. This year, they look to reload and score buckets of points to make up for a defense that will be mediocre at best. Remember that shootout loss when the 'Cats went to the Rose Bowl a decade ago? Yeah, that happened.

Northwestern, by virtue of being in Chicago, is close to some amazing breweries. Half Acre is my favorite (their Daisy Cutter is really good) but today I had a six-pack of Goose Island Summer and some 312 lying around, so I thought that'd be a good place to start. I've also been getting some feedback about more nationally available beers (man, the M fanbase is huge...) so Goose Island was the natural Chicago pick.

Goose is a rare brewery that offers many of their top beers in both cans and bottles. I haven't really noticed a difference in taste between cans and bottles, but I do like the 312 in cans. Their website also has a very cool feature where you can find out where you can buy it if you aren't sitting around in Chicago... On to the beers:

The 312 is one of their year-round wheat collection. It tastes to me like a slightly hoppier version of Blue Moon. My roommate in college used to always have a six-pack of Goose in our fridge - and while it's okay and very drinkable - particularly on hot summer days - it's nothing to write home about. You can jazz it up with an orange (or go big and put a small orange slice and a small jalapeno slice in it) to add to the flavor. There's nothing impressive about this beer, but it's a popular pale wheat because it's not too sweet and very drinkable. There are worse options to have on a lake.

If this beer were a Michigan football player, it'd be: 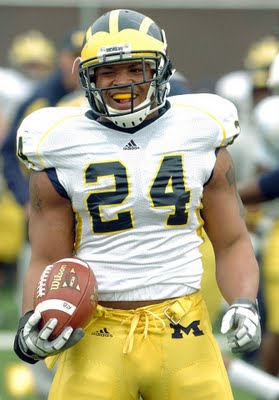 http://www.gooseisland.com/filebin/images/products/full/summertime.jpg I'm not the biggest fan of Sam Adams' Summer Ale this year, so I was a little hesitant to try the Goose Summertime. A very helpful BeerAdvocate review said it was "basically the same beer but very different" so I had no idea what to expect. I gave it a whirl anyway (also because it was 6.99 at my local grocery store for a 6-pack) and wasn't disappointed.

It's a kolsch, which is quickly becoming my favorite type of summer beer to drink. It's not too fruity or bitter, but pleasantly drinkable. More of a full flavor than a lager, with some spice and fruit mixed in. Unlike the 312, you don't need to put anything in this one to enjoy it, and it goes really well on a beach. Again, not too memorable, but definitely would challenge for one of my favorite beach beers.

If this beer were a Michigan player, it'd be: 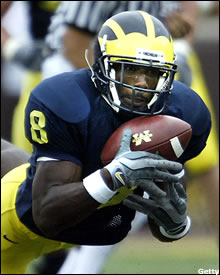 For what it's worth, I also tried all of the Leinie's shandies this year and came away unimpressed - particularly with the Berry Weiss, which tasted more like seltzer water. Yuck. Avoid.

Next time, I'm going to write an ode to Oberon and all things summer, which is definitely the beer of the summer kind of like I've decided this Aloe Blacc/Avicii collab is the song of the summer - move over, Need Your Love/that song named after states. If you're in Chicago, I highly suggest going over to Half Acre and sampling some Daisy Cutter. Give Goose a miss unless you're stuck outside Chicago.

Until next time, cheers, Michigan Faithful!