In Bill O'Brien's first full recruiting class, he faces the destructive force of NCAA sanctions. How did he come out?

By just about any objective standard, it's hard to imagine holding Penn State recruiting to the same measuring stick as the rest of the conference. With scholarship limits, an incredibly negative stigma around the football program, and a coach with constant rumors circulating about NFL departure, trying to judge PSU's class by comparing it to the likes of Wisconsin, Michigan, Ohio State, etc.. is a foolhardy decision. Which is why we won't.

We can, however, discuss the impact that the sanctions had on the recruiting efforts of Bill O'Brien and his staff. This class is ground zero for that impact, as the NCAA's decision was handed down in July of 2012, right near the center of the 2013 cycle. When the bomb dropped, there was a lot of hyperbole (*Cough death penalty cough*) tossed around by sportswriters looking to conjure up an article view or two out of the chaos. Unfortunately for Penn State, perception tends to matter more in recruiting than reality. It was then that the Nittany Lions learned, just as positive momentum can help schools like Michigan and Ole Miss, negative momentum can be an equally strong force of destruction.

Although the 2 names PSU fans were worried about the most- Christian Hackenberg and Adam Breneman- stayed true to their word, many other prospects were sent scrambling. One of the first chips to drop came in the form of Ross Douglas, a 3/4* CB from Ohio, who decided to leave the Keystone State to head to Ann Arbor and become Courtney Avery 2.0.

"It was something we decided before (the NCAA's announcement) because my family saw it coming," Douglas said. "We prepared ourselves for it, and [Monday] was just the icing on the cake. I love Penn State to death, but I have to do what's best for me and I'm going to look elsewhere."

Before Douglas, however, was PA DT Greg Webb, who chose to decommit after the Freeh Report but before sanctions were handed down. Webb brought teammate DE Dajuan Drennon with him, who was also once a top PSU target. While the Freeh Report played a role, it was also due to his family's decision to move south.

The hits kept coming as 4* WR/DB Will Fuller flipped to Notre Dame, despite reaffirming his commitment to Bill O'Brien and some of the other PSU recruits while visiting shortly after the sanctions. 3* LB/WR Zach Bradshaw flipped to UVA about a week later, and then came the biggest loss of all, eventual 5* OT Dorian Johnson (who eventually signed with Pitt). Johnson's decision had guys like Adam Jacobi of BHGP.com saying things like this..

So yes, barring an unforeseeable miracle, Johnson's decommitment will have a permanently negative effect on this recruiting class. And Penn State just can't afford hits like that. Those hits will probably keep coming anyway.

That sort of negative hype train stuck for the rest of the process, although the sanctions didn't play as a big of a role in the decision of LB Johnathon Walton.

LB Jonathan Walton of Mobile, AL decommitted from Penn State Sunday after after returning home from an official visit to Tennessee. He had committed to the Nittany Lions in early December after a visit there. "Tennessee just came in Thursday and offered," Walton said. "The visit went pretty good. I met the new coaching staff. I feel indecisive. I'm just weighing them out right now. Penn State is still in the mix. I just want to make my choice and stick with it. I'll wait until Signing Day or after my last visit." Walton will visit USC this coming weekend and Auburn the following weekend.

Walton ended up deciding to stick close to home and signed with South Carolina.

So that was that. Although they didn't end up gaining commitments from any 247 composite four stars after the sanctions were handed down, they landed the second rated JUCO QB in the country, and most importantly, held onto five-star QB Christian Hackenberg as well as four stars Brandon Mahon, Adam Breneman, and Garrett Sickels.

QB Christian Hackenberg. The odds-on bet to start this year. Hackenberg was the second-best QB in the country last year, and is pretty much Shane Morris with the ability to ALSO throw to the right side of the field.Listed atop the depth chart coming out of Spring Ball.

QB Tyler Ferguson. The consolation prize when PSU lost Jake Waters to Kansas State. Even though it seems like Hackenberg's going to be the starter, Ferguson will probably play when Hackenberg has predictable freshman struggles. Although he's also new to the system, he's got seniority and all. The other starter on the post-spring depth chart, also the only other scholarship quarterback.

TE Adam Breneman. Although some of his former students haven't exactly been in the news for the right reasons, O'Brien's all about tight ends. PSU's got a couple of good ones on the roster right now in Jesse James and Kyle Carter, but something tells me Breneman will find his way onto the field as well.

CB Jordan Smith. PSU's got some big holes to fill in the secondary, none bigger than CB. Smith's an early enrollee who will at least factor heavily into special teams. A redshirt is highly unlikely.

DE Garrett Sickels. The last consensus four-star in the class, Sickels was kind of a big deal when he committed. The Army All American once held offers from the likes of Alabama, Georgia, Florida, and Ohio State. His path to a starting job won't be easy, as PSU has a decent DE in C.J. Olaniyan on one side and All-B1G Deion Barnes on the other side, but he'll stake out a claim once they leave.

LB Brandon Bell. While I'm not too overwhelmed by Bell's highlights, he'll essentially have to contribute at some point. The chances of that happening this year are slim even though Penn State loses their best 2 linebackers to the Minnesota Vikings. He needs weight and coaching in a bad way, but once Mike Hull and Glenn Carson leave, he'll likely be in the two-deep by default.

RB Richy Anderson. Another kid I'm not too impressed with who will still contribute one day. The post-Silas Redd depth chart looked like a disaster; now it's a disaster with a surprising 1000 yard rusher. Unfortunately, Zach Zwinak's a senior, and the rest of the main contributors aren't far behind him. Anderson might be afforded a redshirt this year (despite enrolling early), but he'll be pressed into action once Bill Belton leaves.

WR DeaSean Hamilton. Very raw, but possesses requisite athletic ability to be an impact player. Could end up in the mold of Allen Robinson- lightly recruited to star in this system. PSU actually has some good young talent at the WR position right now (Eugene Lewis, Jonathan Warner), so Hamilton should have plenty of time to learn before being tossed into the fire.

I thought about skipping over this segment entirely, but, well, here goes.

One thing Penn State definitely has in their favor- Christian Hackenberg has a higher 247 composite average (.9925) than anyone in Michigan's class, even Derrick Green. He's generally regarded as a right-handed Shane Morris type that has his stuff more together. Although the composite rankings had USC Commit Max Browne edging him out as the top QB in the nation, Hackenberg will likely have a more productive career due to the opportunity.

Adam Breneman would have come in as the second highest rated commit in Michigan's class, just behind Derrick Green. This, despite the fact that Breneman actually tumbled a bit in the rankings towards the end of the cycle. He's generally regarded as the second best TE in the country behind 'Bama Commit OJ Howard, but he might also end up out-performing that ranking.

After those two, the positive juju for PSU sort of falls off. Their Average Commit is a 3.24-star player, well below Michigan's 3.67. Herein lies the problem for State (as well as USC)- they can still go after the top crust of players, but once something happens to them (attrition, injury, whatever), they're royally screwed.

--> Lots of people thought Michigan might have a chance with Adam Breneman, but he committed early to State and that was that. OG Brandon Mahon also held a Michigan offer, although I'm not sure Michigan fans ever got their hopes up over that.

--> I've touched on this a bit in the article, but I personally believe Hackenberg is the best QB in the nation. If O'Brien stays long enough to really tutor him, he should go down as one of the best QBs in State history. Max Browne showed inconsistencies at the Army game, but Hackenberg kept on showing off (at the UA game). Morris and 'Bama commit Cooper Bateman are on a slight but well defined tier right below those 2.

--> State's 2014 recruiting has gone very well so far, which is either really surprising or really not surprising, depending on who you talk to. I personally believe in the latter- they've still got great facilities, a huge stadium that's always rocking, and tons of opportunity on the depth chart. If you thought this was going to kill their recruiting long term, I don't think you thought it through. Size is going to be an NCAA-mandated issue; quality doesn't have to be. One of the most notable commits is another big-time QB, Michael O'Connor, who should thrive after sitting a few years. 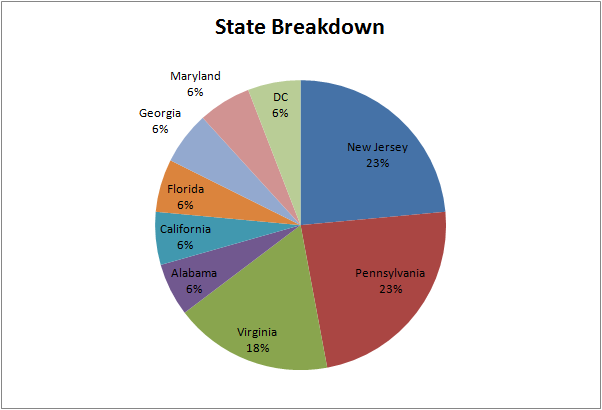 I'm not going to pretend to know how to judge this class. I mean, I guess you could look at USC, but so many of the key variables are different.

Without comparison, however, we still know a few things to be true. By the time Hackenberg is a junior (as long as he doesn't have to switch systems), he has a great chance at being one of the best QBs in the nation, especially with Breneman to target. Keeping the two of them was probably more important than just about every kid that decommitted, with the possible exception of Dorian Johnson. Having such a highly touted QB in the class can help recruiting in future years as well, especially with highly touted wide receivers.