Penn State was much more successful last year than many though they’d be. For all the struggles they had at the start of the season, the progression of the players and their understanding of the system quickly started coming together, and by the end of the season they were a pretty dang good squad. Today, we will discuss briefly what PSU does in the run game, and then delve into their favorite pass concept: the mesh concept.

Introduction
This piece will be a bit shorter today, but hopefully it will still be informative. Penn State has given me absolutely no full game footage, making it very difficult to grasp a whole lot about scheme and patterns. But they do have some pretty good game highlights, and for whatever reason some guy from Nebraska has some all 11 footage from when they played Penn State, so I got some nice stuff coming your way (thanks Alonzo Whaley).

Anyway, Bill O'Brien has done a great job in a short time taking many of the offensive philosophies from the Patriots, very much simplifying them, and then teaching those concepts very well. Penn State's offense is not complex, but it's varied enough to keep defenses honest, and the performance of the players from a fundamental standpoint is very good. In this piece we will discuss the Nittany Lion's zone running scheme and their favorite pass concept: the mesh.

Zone Run Concept
Essentially, Penn State has three run plays: inside zone, outside zone, and draw. It's a fairly easy yet adaptable run offense, and information on it can be found everywhere on the internet. I'm going to try to give a bit more information on the zone blocking runs.

Outside Zone
As Smart Football writes, the difference between inside and outside zone isn't assignment, but rather technique. The assignment itself is dependent on if the lineman is covered or uncovered. 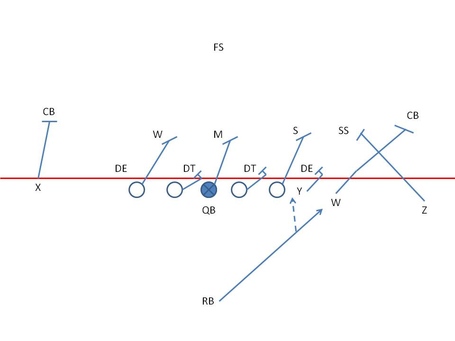 The first step will be nearly completely lateral, with the second step aiming for where the defenders playside foot will be. You then continue to gain width and start moving downhill, with the playside armpit as the aiming point. The goal when getting to the defender is to get the head across the body and staying low. If the defender a far shade playside (for example, on the backside shoulder of the O-lineman directly playside), the O-lineman will rip through with his backside arm, gaining height while doing so. If the defender is only slightly shaded or at a point where the lineman can effectively reach him. Note that this is different for every lineman's ability level. If the lineman can't reach, he must first at least execute the rip through technique. If he can reach, then he will execute what is called a push-pull technique. What this means is that he will punch and press the defender's playside breast plate while pulling and turning the backside shoulder. This allows for the offensive player to remain square with the defender, gives the blocker leverage, and then allows the blocker to start driving downhill.

The uncovered blockers have three reads:

1) The slant. If the defensive lineman to the playside slants away from the play the offensive lineman that is uncovered must adjust because the defender is now coming at him. Typically, the uncovered O-lineman will assist the O-lineman to his playside by attaching and gaining momentum with the defender by latching on with one arm, before releasing to the second level. But if the DL slants into the uncovered blocker, he must bring two hands and then attempt to control him alone so that his offensive lineman counterpart can begin working to the next level.

2) He must be alert for an immediate fill from the LB level. A blitzing linebacker getting penetration can quickly kill any run play. The OL must check for that LB and square up on him. If he tries to slip the block playside, he must be stuffed dead in his tracks. If he tries to slip behind, use his momentum to carry him upfield and out of the play.

3) Climb to the LB level and seal inside.

The backside OT will generally be considered "uncovered" but will have his own technique. He will tend to hold off the DE while gaining depth and trying to reach the backside LB by the time he reaches the midline. If the DE tries to cross his body, he must lift with his rip technique before getting to the next level.

The goal of all these linemen is to get his body between the sideline and the man, first and foremost, and continue to work downfield until squaring up and driving the defender out of the play.

The running back is usually going to aim at the inside shoulder of the TE. Now, the defense is going to try to beat the offensive lineman to the spot. If that's the case, the offensive lineman must use the defenders momentum and carry him to the sideline. This opens up cutback lanes for the RB, which is what he is going to read. What you really want from the RB is a guy that will patiently wait for the opening, whether that's from the line sealing or in the form of a cutback lane, and then plant the foot and in one cut get downhill and squared to the LOS quickly. 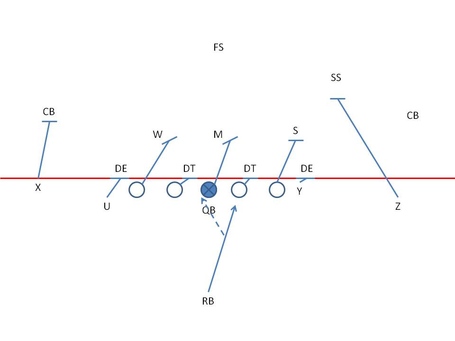 Inside zone is a bit different, in that the blocks are a little more like drive blocks, and the cutback lane is clear across the formation. What you're really doing is trying to get the defense to over react horizontally for easy cutbacks, or beat them to the spot vertically to get very open holes. There are a few differences in blocking technique, though uncovered is nearly the same, so we'll just discuss the covered linemen.

The covered lineman will first take a weight transfer step, gaining lateral ground about half a foot. He will then step right up into the defender, essentially kneeing him in the nuts with his backside leg. He then gains a little more width before squaring up and driving downhill.

For what it's worth from the RB, the aiming point will be the inside leg of the playside OG. The cutback then looks to the backside OG and continues further to the back end.

Mesh Concept
PSU runs a lot of rubbing patterns and concepts, designed to essentially pick man coverage and create defensive movement and confusion and therefore opening up larger voids and windows against zone coverage. The favorite concept is the mesh.

What happens around the mesh concept can be varied greatly. The Air Raid offense is the the biggest proponent of this concept. But there are various ways to run this play, from determined pre-snap heights and levels, to adjusting heights based on the defense and running the mesh relative to that adjustment. Most common is the latter of the two, as it's more adaptable on the fly, so we will discuss that. Typically, the cross can come from the slot receiver, but it can come from anyone from the outside receivers to the RB. Typically these are run from 2x2 balanced formations or 3x1 formations, and for PSU it's no exception.

The receivers will then continue across the formation working to gain distance horizontally, stretching the LBs, and looking for voids in zones for the QB to see. It's typically an easy read because... There will also usually be a flat receiver to stretch the defense horizontally. 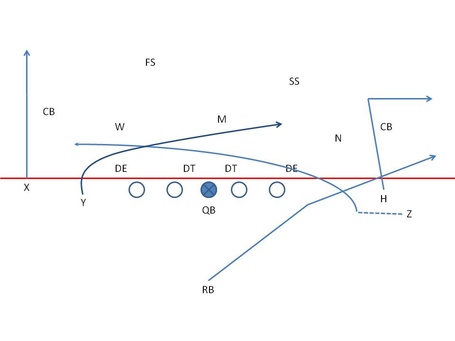 The outside receivers will essentially run corner/fade routes, depending on the safety coverage and their splits. If the sense man, they'll break it off and run an out route. This concept stretches the defense horizontally and vertically.

Listen to an explanation here.

The reads, at least for Leach, are to read the corners and work back to the mesh and then finally to the flat. I believe that is the case here as well. 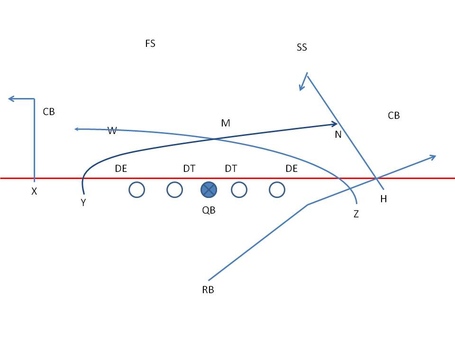 Here is the play I've seen PSU run several times, both against Nebraska and in other games. This concept attacks the middle of the field at various levels. First the post attacks deep. If there is no safety holding deep, the QB will alert to the post. Next, he works his way down to the dig route. If the single high safety is held by the post, look for the dig to come over underneath, making sure there isn't a robber safety waiting to jump the dig. The next is to check down to the mesh concept. The first two reads are quick, and if they aren't obvious you work down, now you take your time and scan the LBs. The QB must make sure to read in front of the WR so you aren't throwing them into a big hit. Lastly, the QB will check to the RB in the flat. 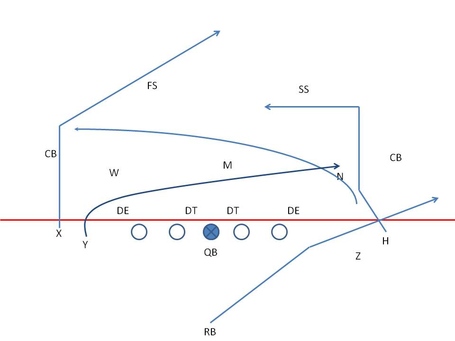 This concept will flood the short zone, very much like simple hitch routes. The difference is here that you get a lot more moving parts and rubbing action from the offense, making it much more difficult for the defense to correctly execute their zone coverage.

You can find more variants here.

So what does all this mean? Well what it shows is that the Nittany Lion's coaching staff is willing to simplify the playbook a bit and focus on execution and technique. With the outside zone they have managed to threaten the edge running without a true speedster at RB. The inside zone allows them to threaten the middle of the line and provides a natural counter via the cut back. The draw play takes advantage of teams who want to bail out too quickly to cover the pass. Then, with the mesh concept - the two crossing routes and the one route to the flat - you can essentially place two other routes with it and threaten any area of the field and succeed against any coverage. And the great thing about it is that it can come from pretty much any formation, from 5 wide, to pro sets with two backs, two WRs, and a TE. The mesh can be run with inside or outside receivers, RBs, or TEs. There is a level of predictability if that's all they ran, but there I think a better phrase is a level of simplicity. There are enough variations to it to keep the defense on their toes. Combine that with the many rubbing routes and fairly traditional pass concepts - crossing routes, double digs, double posts - and you have an offense that can execute, even if it doesn't confuse you.

Many of Penn State's schemes are fairly typical. It is by no means a pro-scheme run in college; one of the best things O'Brien has done was simplify the offense so that college players can execute properly. While he runs a lot of similar concepts, even outside of this mesh concept, none of them are particularly complicated. Perhaps the biggest improvement made from O'Brien came from the QB position. One thing Tom Brady has always been known for was his ability to manipulate the pocket and move within the pocket to get could passing lanes and delay the rush, if even only a split second more. That has clearly been something that O'Brien has brought to Happy Valley with him, as the QB looked very good stepping up in the pocket, side stepping, back stepping away from pressure, and breaking contain, all while not being a necessarily great athlete. It's these sorts of things, the coaching of technique and ideas, that I was most impressed with when watching PSU play. It was a team that knew the intricacies of how to play, and that's something that will likely help them maintain success going forward.