How did the Badgers do in recruiting while dealing with a coaching transition? We take a look at Wisconsin's 2013 recruiting class.

There are really three types of coaching changes; (1) The firing, in which all parties involved generally walk a slow road to the ultimate action, recruits begin to jump ship, and the program generally develops a negative stigma around it, if only for the short term; (2) The retirement, usually fairly well planned for both by recruits and recruiters, mainly because the schools try to quickly find a replacement and keep the recruiting class, and; (3) The coaching change for a 'better' job. Most of the time, you'll only see this with coaches like Gary Andersen at Utah State, a fast rising coach through the ranks who turned his team around in such a short time and was almost inevitably headed for bigger and better places.

But sometimes, you'll get the BERTs of the world; who praise the conference they spent months disparaging less than a year ago, and think they'll be able to turn a low tier SEC program into a national champion (which, by the way, has to be his goal, if playing in BCS games every year simply isn't good enough for him). BERT is the rare example of a coach willing to leave his well-paying an (semi-) well-respected position in a power conference for another power conference, even if I'd have to be completely ignorant to suggest he's not going to a better one.

It was unexpected, quite shocking, and a bit of a slap to the face of the recruits he had been pursuing for those years in Madison. A neutral observer (like myself) expected a lot of disarray in the wake of such a decision, at least in their recruiting efforts.

Instead, in comes the aforementioned Andersen, a hot coaching name who seems to be the polar opposite of BERT. The decision to leave was a legitimately tough one to make, and Andersen reportedly called every one of his Utah State players to inform them of his decision. Even the harshest cynic has to expect some of that goodwill to flow into recruiting, and indeed it did, likely the reason the Badger's class was salvaged.

Of course, it wasn't without scarring, though. Chance Stewart decommitted (and ended up at Western Michigan). 2* JUCO S Tiquention Coleman followed Bielema to Arkansas. Lastly, 4* S Tyler Foreman decommitted in January following Bielema's decision to leave. The latter two were especially painful for the Badgers, who had earlier planned on bringing in lots of safety depth in the 2013 class to help replace starter Shelton Johnson.

But, overall, the class stayed in tact, especially so for Wisconsin standards. Andersen held onto some of the headliners of the class like DE Chikwe Obasih, DB Keelon Brookins, DE Alec James, and RB Corey Clement. In perhaps his biggest win, he also added the signature of JUCO QB Tanner McEvoy the number 1 signal caller in the JUCO ranks, and former USC Gamecock. The primary draw for McEvoy was the chance to compete immediately for the starting spot.

UW first-year coach Gary Andersen has promised an opportunity to all of the junior college transfers in fall camp, which is all McEvoy wants. Spring practices ended with sixth-year senior Curt Phillips and sophomore Joel Stave splitting time at quarterback.

"That's all I'm looking for, is a chance," McEvoy said. "I'll let the coaches decide and play it out from there."

McEvoy was signed, in part, because the coaches wanted to add a dual-threat quarterback to the mix. Campanile thinks McEvoy can be effective under center or running a true spread attack out of the shotgun.

And compete he should. As the article states, Wisconsin is banking on Phillips and Stave to quarterback their team this year, and if you watched them last year, you know that means the Badgers aren't likely in for something special. With McEvoy, that special play potential is palpable.

QB Tanner McEvoy. The JUCO transfer was brought in to compete immediately, and he seems like he probably has the highest upside of any of the quarterbacks on the roster right now. If he can reach that sooner rather than later, he might be able to work into a platoon starting job with Phillips or Stave, perhaps taking the job for himself by the end of the year.

S Donnell Vercher. Another JUCO recruit, Vercher is going to be expected to help fill in the aforementioned need at safety. Vercher doesn't look like he has elite athleticism, but he's worked on his ball skills since high school and should be a ballhawk.

DE Chikwe Obasih. An athletic freak in the mold of O'Brien Schofield, Obasih should have a chance to compete sooner rather than later.

S Matt Hubley. It may seem I'm going heavy on the secondary emphasis, but just look at Wisconsin's class-so are they. Hubley may be a bit like Ray Vinopal; his ceiling's not that high, but he's very close to it now. As a result, he may be counted on as a quick contributor, if only on special teams.

WR Rob Wheelwright. I'm not all too high on Wheelwright. Michigan offered him, but when I reviewed tape of all of their offer recipients at WR last year, he came in at the bottom. Still, Wisconsin doesn't have any 'sure things' at WR aside from Abbredaris and there are rumblings that Wheelwright's expected to contribute early. In my opinion, he's a bit like Hubley- I don't think his ceiling is that high, but he might be close to achieving it.

TE Troy Fumagalli. Practice reports from spring have highlighted three tight end sets as a trend for the Andersen offense. Although Wisconsin is fairly veteran at the position now and Fumagalli needs to add weight, he'll definitely be heavily in the mix in a few years.

OL Hayden Biegel. The skinny offensive lineman looks like he'll be next in the line of dominant Badger lineman, but he's far from the weight he needs to be.

LB Leon Jacobs. A late riser who was committed to Fresno State for the longest time, Jacobs is an athletic freak with a high ceiling once he improves his technique and weight.

RB Corey Clement. Clement might actually make a decent run for the starting spot this offseason, but he probably won't secure it on his own. However, the highly sought-after back seems to have a bright future ahead of him. The only problem for him right now is the string of similarly sought-after guys ahead of him on the depth chart (Vonte Jackson, Melvin Gordon).

CB Sojourn Shelton. The early enrollee has actually carved out a role on the depth chart already, but I don't know that the Badgers will count on him for significant playing time this year. The Florida DB picked the Badgers over offers from USC and Florida State.

The 247 average for this class is actually fairly level with Michigan State, at .8522. While that's fair from Michigan's, it does go to show you that this class would have been a bit higher ranked if not for the small class size. At .9308, RB Corey Clement would have come in as the 11th highest rated kid in Michigan's class, edging out Logan Tuley-Tillman.

Wisconsin's diversity is also an interesting contrast to Michigan State's. The class comes from 9 different states, although the mothership (Wisconsin) accounts for 6 out of those 18 kids. Others come from New Jersey, California, Florida, and Massachusetts.

--> Rob Wheelwright was the only player to get offered by Michigan, but Tanner McEvoy was offered when he was coming out of high school. Alec James, Matt Miller, and Hayden Biegel all received interest from Michigan, as well. If you think you recognize the name Matt Miller, it's because he's the little brother of Michigan C Jack Miller.

--> This Wisconsin class also has the youngest Watt brother, T.J., who is expected to play TE for the Badgers in the fall. The second oldest brother, Derek, currently plays fullback. 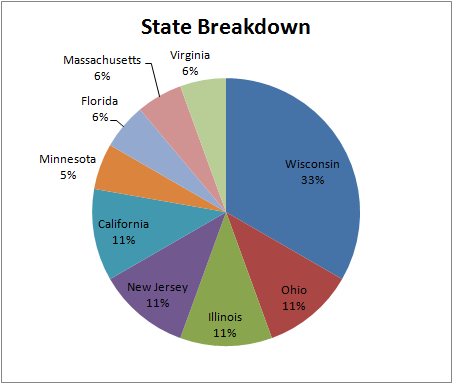 This class is up with Illinois and Indiana as far as impressive classes go. Bielema took off (figuratively) in the middle of the night with less than 2 months before NSD, and Andersen somehow managed to hold together one of the best (if somewhat small) classes in the B1G. It's remarkable that he was able to get prospects and their parents to trust him so soon after the coach left them.