FRR updates you on the very latest Michigan football recruiting rumblings. Can we expect any big news to come from the barbeque at Michigan Stadium? Which five-star defender plans on seeing Michigan under the lights? That and more.

Michigan will hold its annual Barbeque at the Big House this weekend; you can find my original list of visitors and notes here. Also, remove 2014 RB Jonathan Hilliman and add 2015 S Tyriq Thompson to the list, along with 2016s OLB Dele Harding, QB Messiah DeWeaver, OL Thiyo Lukosa, WDE Lawrence Gordon and ATH Desmon Fitzpatrick (per Steve Lorenz at 247 Sports($)). Lukosa could get his offer during the event, and Michigan is a near holy lock to land him if they decide to throw their hat in the ring.

I don't expect anything groundbreaking to go on during the barbeque, although the possibility of a commitment is always high when you gather so many Michigan football prospects in one of the most impressive venues in sports with Brady Hoke and Greg Mattison. The big name at the event is obviously running back Leonard Fournette. I expect the staff to put the full press on him all weekend, showing him everything from the weight rooms to the campus, and also letting him hold on to the coveted Heisman Memorial Trophy. Showing him the mile-long list of elite offensive lineman committed and on campus might help, too. The goal is to impress Fournette enough to lock in an official visit, which would extend Michigan even further into his recruitment and keep the Wolverines on his mind.

Michigan also needs to impress five-star class of 2015 receiver George Campbell, who will be on campus for the weekend with high school teammate and Michigan commitment Mason Cole. Florida has put itself in the driver's seat for Campbell, but Michigan can make up a lot of ground at the event.

The Barbecue At The Big House Is On Sunday.

Top Prospects Visiting... The nation's top overall prospect according to the 247Composite in running back Leonard Fournette. The New Orleans (La.) St. Augustine standout heads to Ann Arbor for the first time favoring LSU and Alabama, however his friendship with fellow five-star in Michigan commit Jabrill Peppers has helped put the Wolverines in the game. In-state 247Composite five-star defensive lineman Malik McDowell is a tentative visitor. In the 2015 class, five-star receiver George Campbell will be making a return trip from Tarpon Springs (Fla.) East Lake, and 247Composite five-star Hjalte Froholdt may be on campus as well.

Most Likely To Commit... If anyone pulls the trigger this weekend it could be Lakewood (Ohio) St. Edward Top100 2015 cornerback Shaun Crawford, who 247Sports saw run 4.3 hand in the 40-yard dash at the Raw Talent Combine during the winter. Crawford has been to Michigan several times in the past and the Wolverines are the clear leader early in the process.

As does Tom VH of ESPN Wolverine Nation:

Tom VH also put out an interesting tweet regarding the weekend:

In short, it's a very big weekend for Michigan in recruiting.

Michigan's already stellar list of visitors for the Notre Dame contest grows by one, and it's a big one:

Saint Paul (Minn.) Cretin Derham Hall five-star defensive end/outside linebacker Jashon Cornell tells 247Sports that he won't be at Ohio State on Friday as originally planned. As reported above he'll be at Iowa on Saturday. Cornell added he'll be at Michigan's home game against Notre Dame during the fall.

Cornell is massive at 6'4", 245 pounds, yet athletic enough to be looked at as both an outside linebacker and a weak side defensive end. He looks like a Notre Dame lean right now.

Michigan could benefit from him placing importance on academics.

Many assume that Michigan is dropping for four-star cornerback Parrker Westphal, myself included, but one of his latest tweets might infer something else:

I don't care anymore.. I'm going back to focusing on my 1st love 💎, cause you are someone I can't trust.🙈 http://t.co/xHr8v1rAwp

The link leads to this: 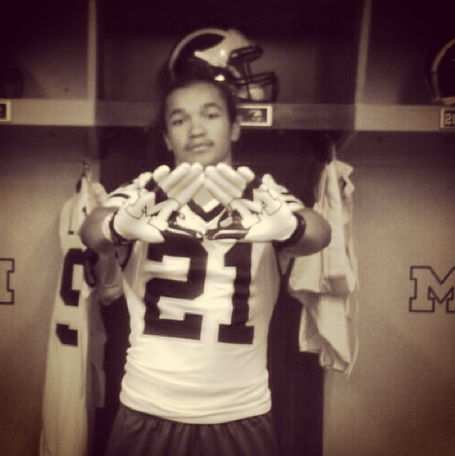 Call it what you want.

While we're on tweets that probably don't mean as much as we'd like them to mean:

Don't count on Michigan becoming a serious contender with Henry, who is likely to stay in the state of Pennsylvania.

Michigan linebacker James Ross is a future stud, and one football reporter believes his younger brother will be just as good:

Joshua could be a name to keep an eye on down the road.

Make sure to check out DGDestroys' latest updates to the Michigan Big Board. Da'Shawn Hand doesn't come in at number one.