MRR updates you on the very latest Michigan football recruiting rumblings. Was this weekend's barbeque the best yet? Just how much of an impact will George Campbell's commitment have on Michigan's recruiting efforts? That and much more.

Share All sharing options for: Monday Michigan Football Recruiting Roundup Is In Shock

Get ready for one hell of a ride, folks. This one's a doozy.

Michigan football fans knew this weekend would be one to remember in terms of recruiting, but no one knew just how memorable it would be. Countless four- and five-star athletes were scheduled to be in Ann Arbor for the annual barbeque at the Big House, including Wilton Speight, Mason Cole and five-star freak receiver George Campbell.

At first, things went as planned:

Headed to the airport...ready for a big weekend in Ann Arbor!!

Time to get my mans @GeorgeCampbell0 on board! Lol bout to get have a good visit to AA, just like last time

Heading to the airport

Little did we know that a killer whale loomed large in the sky: 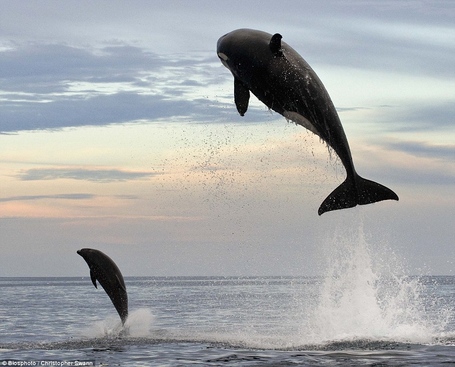 The picture may or may not have anything to do with football recruiting, but it warrants the same reactions that the commitment of George Campbell drew:

And it didn't end there:

BUT FOR REAL GEORGE CAMPBELL AMIRITE?

And you may never see me drop a holy crap again. But yeah.

And, after all of the reporters and fans picked up their jaws and mopped up their drool, the recruits started to notice:

That's monster OLB/WDE/SDE Jashon Cornell, a consensus five-star defender. He wasn't the only one, either.

I know I'm a little late on this, but I just wanna say congrats to my bro @GeorgeCampbell0 for committing to Michigan! #GoBlue

There's a trio of elite players in Damien Harris, Christian Kirk and Jacques Patrick. They were only a portion of the recruits who noticed, forcing recruiting analysts like Steve Lorenz to remain in a state of awe:

Haven't seen a reaction to a commitment like that with #Michigan. Elite players all over took notice with that one.

It usually takes me fifteen minutes to sift through my Twitter account for roundup information; it took me an hour just to get through the George Campbell tweets this week. 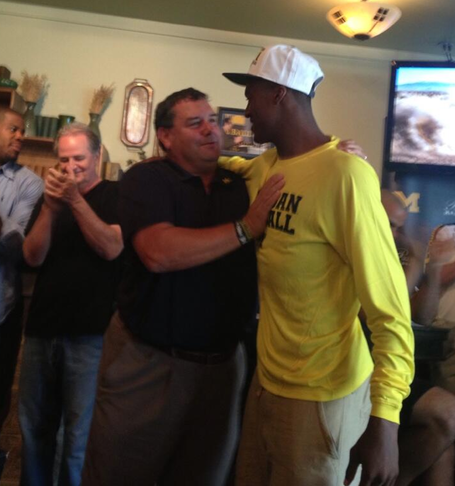 People eventually started to analyze the commitment and break down Campbell's attributes, myself included. Campbell will be recognized as a five-star receiver by all of the major recruiting services because of his ridiculous physical attributes. He stands between 6'3" and 6'4" tall and currently weighs roughly 190 pounds. He ran a 4.36 forty-yard dash on grass at Nike's The Opening, and he's only a sophomore in high school.

The sky is the limit for Campbell. He's as fast and explosive as any receiver his size in the game today, and he'll downright abuse defensive backs once he reaches a playing weight of 215 pounds. He possesses elite core strength for a receiver, allowing him to run through contact during routes without losing balance or vertical explosion. His ball skills need refining, but he has two years to work with the jugs machine. Campbell could legitimately become the next Julio Jones of college football.

Oh, and he'll definitely have an impact on Michigan's recruiting efforts in the class of 2015. More than one site has reported how close Campbell is with 2015 athlete Brian Cole; Michigan is now an even heavier favorite to land the rangy combo prospect than it was before. Jacques Patrick amd Jashon Cornell already showed you just how excited they are over Campbell's commitment to the Wolverines, and many Florida natives are bound to take notice over the coming months. The effects of this commitment are nearly immeasurable.

The barbeque at the Big House was shook when Campbell picked Michigan, but the good news didn't stop coming. Recruits were tweeting positive reactions and pictures of them in winged helmets left and right:

I can't stop thinking about this experiance. #GoBlue pic.twitter.com/iStSZ9N4tE

Just a couple decent weapons of mine.... pic.twitter.com/KkoxFzNFQr

The Michigan Cookout was a success. Definitely gave a lasting impression #GoBlue! ][V][

S/o to @GeorgeCampbell0 and @MasonCole52 it was great meeting you future wolverines!

And there's so much more where that came from.

There's too much information to go around; bullets are inevitable:

There you have it. No one could have predicted for this event to go as well as it did.

Yes, there is negative news coming out of the weekend. All-world running back Leonard Fournette was supposed to be the cream of the crop in Ann Arbor during the barbeque, but it became more apparent that he wasn't going to show up as time went on. He was supposed to leave on Thursday and stay until Sunday, and word eventually spread that he wouldn't leave until Friday or Saturday. Both days passed, along with the commitment of a different five-star athlete, and suddenly his no-show wasn't that big of a deal.

Could Fournette make it to Ann Arbor on another date? Sure. Will he? I doubt it, and he wouldn't be committing to Michigan either way. Turning down the biggest recruiting event on Michigan's schedule to attend during a bland weekend makes no sense at all, adding to the argument that Fournette wasn't ever really an option for Michigan to begin with.

Michigan commitment Jabrill Peppers drew one of the most impressive comparisons I've ever heard from a college coach:

An assistant coach from the University of Southern California stands awestruck as Jabrill Peppers -- the nation's No. 2 recruit in the class of 2014, according to Rivals.com -- walks down the track at Paramus Catholic High in New Jersey on a warm spring morning. Greg Russo, Paramus Catholic's offensive coordinator and head track coach, doesn't understand what all the excitement is about. The USC coach looks at Russo, then at Peppers, then back at Russo.

"I've only seen two players in high school with a body like that," the USC coach says, "and both of them are named Peterson [Adrian and Patrick]."

Peppers' build is indeed ridiculous. It might have something to do with his work ethic in the weight room:

Both Drake Harris (MI) and Jabrill Peppers (NJ) have been named preseason Mr. Football in their respective states. Peppers is a holy lock to win the award at season's end in New Jersey; Harris is the heavy favorite in Michigan.

Linebacker Noah Furbush does exist in the flesh. He talks about his commitment to Michigan and the 7-on-7 tournament experience:

It always bugs me when a player says he wants to improve his speed. Furbush should still be a fantastic run-stopper at the MIKE spot.

Michigan State could swoop in and steal four-star corner Parrker Westphal. Who knows where he ends up.

Detroit Cass Tech continues to show off its ridiculous amounts of talent:

The Alumni classic looks like a Mini Michigan scrimmage! Everybody wants to see Webb on J.D!

With perfect coverage J.D catches a one handed jump ball for a touchdown on Webb. My kid couldn't have played it better. Wow! J.D is sick!!!

It's painful for me to hear anything about Damon Webb, who will most likely go on to be a force at corner for Ohio State. Then again, George Campbell. Ah, that's better.