Brady Hoke and his staff shocked the Michigan faithful Saturday night by landing a commitment from the top 2015 WR. What does it mean for Michigan, and what does Campbell bring to the table?

2015 FL WR George Campbell, listed as somewhere around 6'3, 200, gave Michigan fans quite the rush Saturday night when he committed to Brady Hoke the night before the Barbeque at the Big House. While Campbell seemed to be quite enthused with Michigan following previous visits, recent sentiment had him more projected to Gainesville. That, coupled with the early timeframe and general Florida-ness of Campbell's family. contributed to the shock that many fans felt when word hit twitter that Campbell had decided to drop.

As I said on the tweet-mobile, I have never seen anything like this in all my years following recruiting. Don't get me wrong, I've seen some of the big names drop to Michigan. However, in almost all of those cases, it's been at a scheduled announcement or with hype preceding their decision. For example, if Malik McDowell committed tomorrow, would you be this surprised? I know I wouldn't. However, getting along to the actual profile...

When looking at Campbell's recruiting story, it's significant to remember that this kid comes from Florida. The heart of SEC country, as it serves as one of the biggest talent pools for the Floridas, Georgias, and Alabamas of the world to pick from. If they don't go SEC, chances are they're headed to Clemson or Florida State, but almost never the B1G. I mean, let's just take a look geographically.

I mean, all of those are manageable one day drives. While I'm not saying it's unheard of for a top-tier Florida talent to leave the state, just take a look at how often it happens- and where they end up. This graph includes all 247composite five-stars from Florida between 2007-2014. 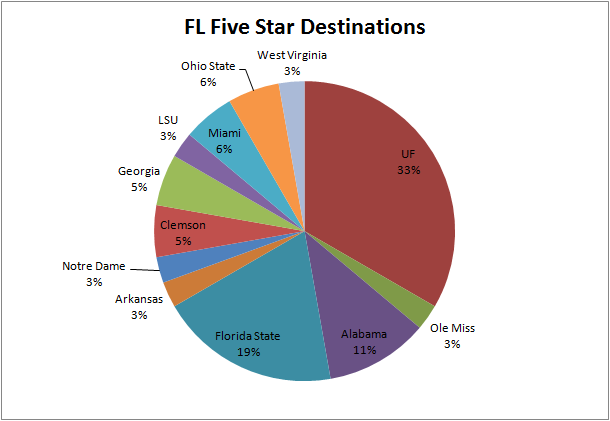 Impressive right? With a few exceptions here and there (Noel Devine to WVU, Sabino/Brewster to OSU, Aaron Lynch to Notre Dame), the best prospects in the state stay in the typical SEC footprint. The only schools not in that group are local schools that you'd expect to compete for Florida kids, like Clemson, Miami, and Florida State. Well, let's narrow that down a bit more, this including only Florida kids that are also ranked in the top-15 nationally of the 247composite scale. 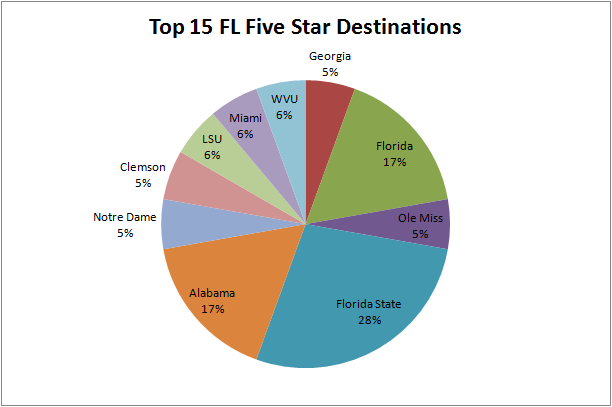 The pickings get even slimmer. In this graph, we see the only player from Florida during that time period to go north of West Virginia ended up transferring back to play for USF (Aaron Lynch). When you narrow it down to the B1G, it becomes even more staggering. As far back as 247composite rankings go (2002), no Big Ten school has ever pulled a five star from Florida. Ever.

All of this is why, when George Campbell began to blow up after his Michigan offer, fans began to get skeptical. Lots of local players get blown away when a top-tier school shoots an offer their way; when the local schools start to put the full-court press on them, that infatuation tends to fade. It's why, even though people were confident about him early, Florida seemed like the probable destination. If not Florida, well look at that graph. Any number of those schools offered him and would have been glad to have him. It's not to say that won't end up happening in the end, once he spends a couple more years in the heart of SEC country. But for now, it's a pretty damn impressive job by the Michigan staff. I'm hoping the presence of Mason Cole for another year will keep Campbell true to his word.

So, anyway, I've built up a lot of hype around this commitment, so now I should probably explain it. A couple of disclaimers first, though. A lot of people like to list Campbell at 6'5. In response to that, I have a few pictures for you. 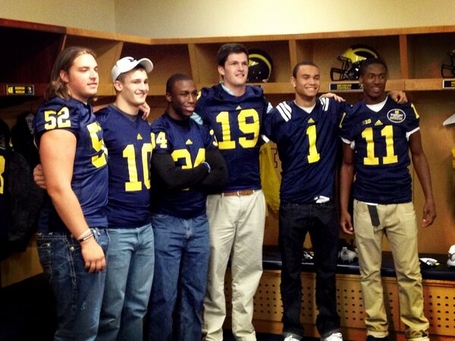 Here's another I can't embed for some reason. Anyway, the point is that in the first picture Campbell is about level with Drake Harris (6'3), and in the second picture he's well shorter than Mason Cole (6'5). I feel pretty confident saying that Campbell is 6'3ish. Could he grow more? Sure! But so too could have Jourdan Lewis, Terry Richardson, etc after they started picking up interest going into their junior year. Alas, neither of them really did.

The second point I'd like to make is that we should probably tone down some of the Megatron comparisons. Campbell is rated so highly because mainly because he's big and super-athletic. So too was Dorial Green-Beckham, who struggled mightily his first season at Mizzou (at least he did when one compares expectations to productivity). The point is that while both may have the potential to one day be Megatron-esque, Johnson's ability is refined, concentrated, and at the peak of its game. Expecting the same out of Campbell at this point (or even in college), is really setting oneself up for disappointment.

Buuuut after playing the role of Debbie Downer for a few paragraphs, I do have to say this- holy crap. I mean, first take a gander at some of the measurables. 4.36 40 yard dash, 4.12 shuttle, 37" vertical, all as a sophomore! Then you take a gander at his highlights. There are obviously tons of things he hasn't come close to perfecting, but there are so many little innate things about Campbell's game that you have to like. First, and most importantly, is the passion you can see he plays with. That's especially prevalent on the defensive side of the ball where he looks like he's shot out of a cannon on every play-for the whole play. I like how he keeps his feet under him when he goes for jump balls so YAC remain a possibility. He shows the ability to box out defenders when a ball is coming his way, using his big frame to shed some of the pressure. He seems to have an intuitive sense for where the defenders are, which allows him to concentrate on bringing the ball into his body instead of worrying about the incoming safety.

There are also a million little nitpicky things he needs to work on, but when you look at the positives combined with the measurables, and you have to believe he's one of, or perhaps the, best wide receivers Michigan has recruited in the past 20 years. It's hard to compare based on his sophomore film (junior film is the most heavily scrutinized and evaluated), so I don't feel completely comfortable making comparisons just yet. But if that potential continues to build into productivity, it's hard to grasp his ceiling.

The funny thing about the commitments from Campbell and Jabrill Peppers is that they come at a time of great strength at their position, when a few years earlier it could have meant the world (not saying it doesn't...just a bigger world I suppose). Peppers will join the team when the secondary is the best it's been since...Leon Hall's days? Here's what I said when Jabrill committed.

If Dymonte Thomas takes over for Thomas Gordon, we'll see two highly touted (and somewhat experienced) safeties in Thomas and Wilson prowling deep, with two experienced senior CBs in Countess (ok, RS JR) and Taylor on the outside.

While the WR corps won't be quite so strong when he gets there, it's still somewhat comparable. The starters will likely include SR Amara Darboh, RS JR Jehu Chesson, and (if the hype is valid) JR/RS SO DaMario Jones. Michigan will have explosive young talent in the form of Drake Harris and Freddy Canteen; while Jaron Dukes, Moe Ways and C'Sonte York will all have been on campus for at least a year. Factor in the tight ends and it equals one of the best receiving corps Michigan's had since Manningham/Arrington left.

Like Peppers, though, it probably won't matter. I think Campbell will get some snaps spelling Darboh, and on 3/4 WR sets. He'll probably be groomed to replace Darboh unless York/Ways/Dukes shocks the world.

So, there ya have it. Hoke and his staff surprised a lot of people landing one of the top talents in Florida so early in the 2015 cycle. But if they can fish talent out of SEC country, where can't they get kids? Campbell, in addition to being an elite talent on the field, could have a Ferns/Morris like impact on the 2015 kids, the only difference being that he's a national recruit instead of a regional guy. It'll be interesting to see how that affects the kids Michigan brings in for '15.