Reinventing the wheel is extremely rare in football. While Urban Meyer has developed innovative wrinkles and added interesting concepts into his spread offense, the origins of many of his schemes can be traced back to the single wing offense, which Michigan was famous for running under Fitz Crisler. In this article, we look at the similarities between the two offenses.

Ohio State and Urban Meyer are best known for their spread offense. Meyer though, has taken the run-based spread and brought it full circle. Today what I want to do is compare Ohio State's offense to Michigan's offense. No, not to Al Borges's offense. No, not even to Rich Rodriguez's offense. I want to compare Ohio State to Fritz Crisler's 1947 Single Wing offense. In this article we're going show you one of the most innovative offenses of the day, by comparing it to one of the most explosive offenses of yesteryear. It will be light on words, but heavy on diagrams and old timey video.

Getting the Differences Out of the Way

Let's start by getting the differences out of the way. No offense to Crisler, but his passing concepts wouldn't cut it in today's game. While Meyer has a relatively simply passing playbook, it's vastly more advanced than the single wing playbook. Well, besides the jump pass; that's straight from the single wing.

Another significant difference is the personnel. The single wing looks like this 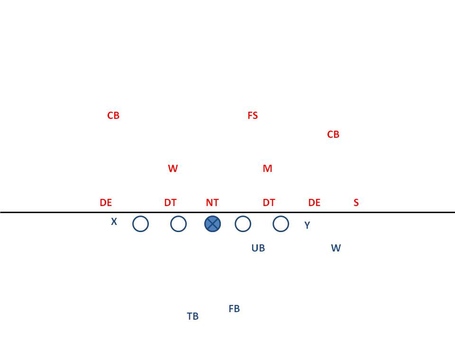 While a typical spread formation in Meyer's system looks like this 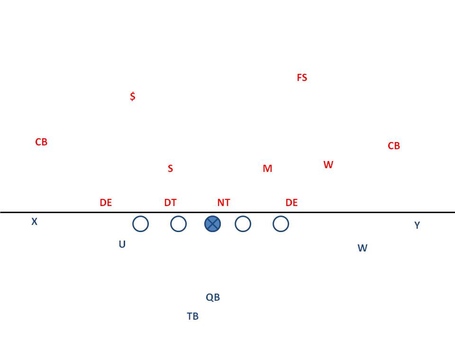 So Meyer is running a sort of spread out single wing. Well, I guess that makes sense.

Within the run offense itself is two fundamental differences. The first is the blocking scheme. Meyer is a big proponent of zone blocking, as most spread coaches are. If zone blocking existed at that time (I'm almost certain it did not), then it certainly wasn't prevalent or understood well enough for major universities to be using it.

The second thing, a thing that is both fortunate and unfortunate, is the distinct lack of a spin series from OSU. Here's an example of what is referred to as the "spin" portion of the single wing:

As a Michigan fan, it's unfortunate OSU doesn't run it because Miller could potentially get destroyed. It's fortunate, though, in the sense that the spin series is awesome and I'd have to actually love watching the Buckeyes, even if I still hated them.

A couple schematic notes: the dashed blue line shows who the snap is going to. Typically, the ball will be snapped straight back and the back will adjust to it, but this is the easiest way to show who is receiving the snap.

The green lines and dashed lines indicate an option. In the OSU version of the plays, the option will actually be options from a single play call. From the old single win plays, each option will typically be its own play with its own blocking scheme, unless otherwise stated.

Both teams will run a simple off tackle play with the person the ball is snapped to. For OSU, this is the QB. In the single wing, this is more often than not the FB.

OSU out of the spread: 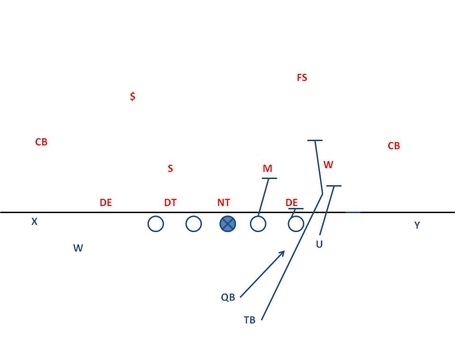 The same play in the single wing: 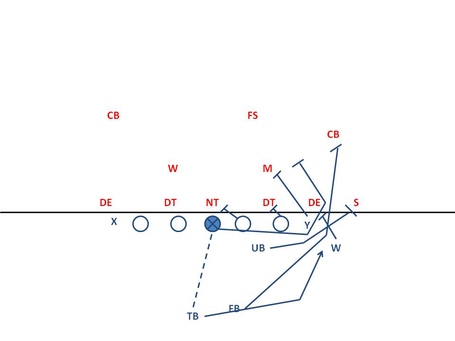 Give Off Tackle - Option

In this instance, one of the new fangled trickeration is for OSU's QB to actually read the play and make it an option play. On top of that, they'll throw in a pitch option. Those misleading bastards, I tell ya, the audacity of those Buckeyes. Oh wait, while Michigan didn't read option anyone on the defense, they were almost as equally deceptive, faking the reverse off tackle and essentially running the option to the front side. 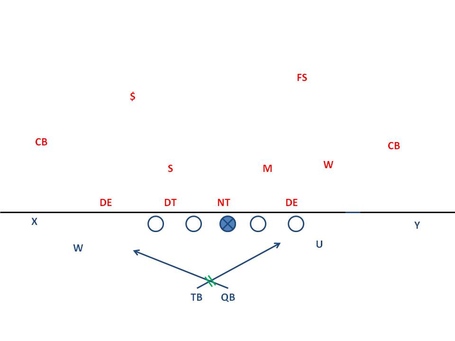 And Michigan's, well, you get the picture: 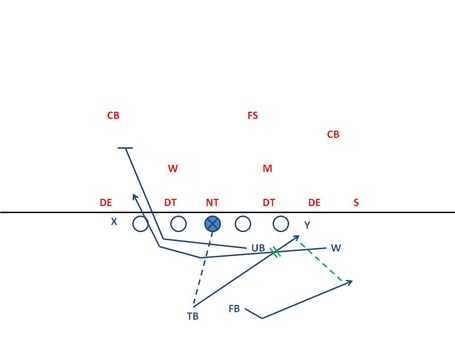 At times, OSU will give on the inside dive, and rather than have Miller play out the veer or belly option, instead they'll drop him to make it look like he's going to pass. 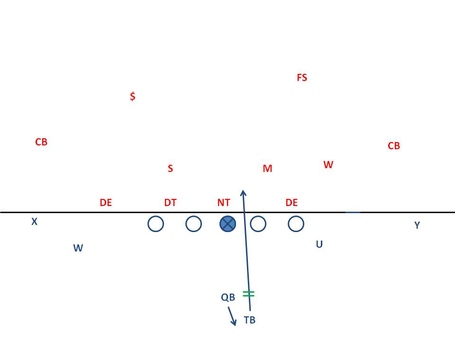 Michigan had something very similar. 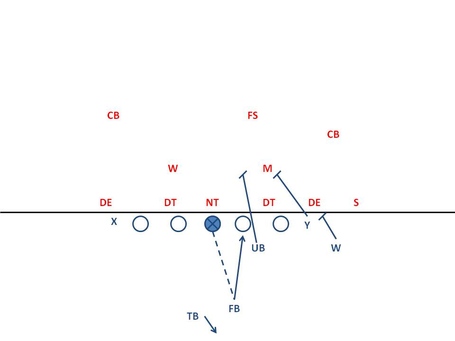 Perhaps OSU's favorite play is the veer or belly option, in which they have a dive back take the ball to the front side of the play and have their QB attack the edge. OSU likes this play because it allows their power backs to attack between the tackles and allows Miller to utilize his speed and allusiveness on the edge in space. 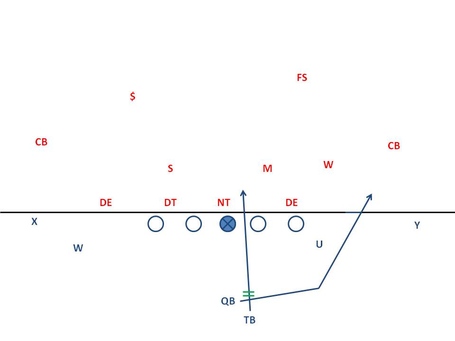 The single wing will run this same type of play out of their spin series. 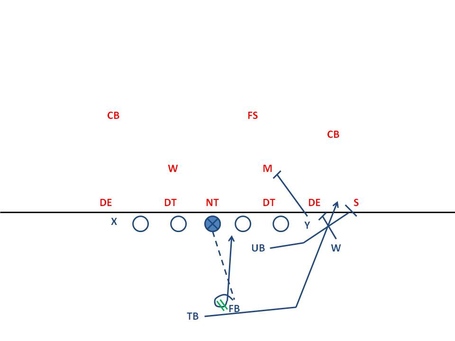 Ohio State will run out of something that is essentially an offset I formation, but out of the pistol. In it, they have the option to give on the dive, and then they typically run an option off of it. 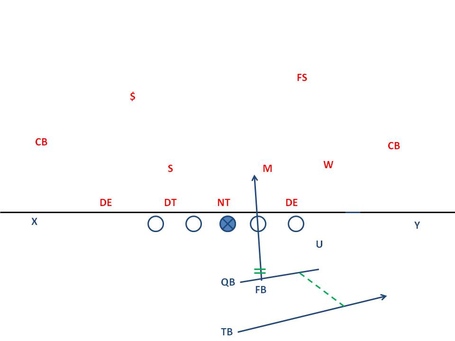 Well Michigan did something comparable, though perhaps without the option, but definitely more badass. Yeah, you thought the spin series was crazy... 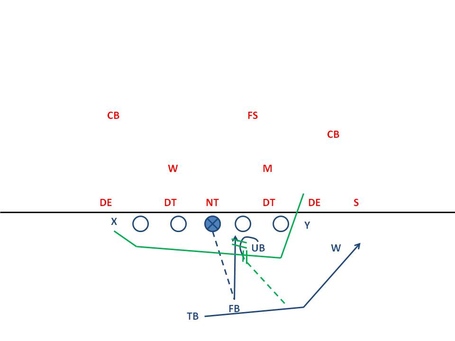 This is part of what is referred to as the "Buck Series" (typically UB is referred to as the Buck Back, or BB) in single wing terminology and the diagram can be confusing here. The snap goes to the FB, who then potentially hands the ball to a looping UB, though the dive is a play with the rest of the motion being a decoy. If the UB receives the hand off, he has the option to pitch the ball to the TB, or he can potentially loop around and run off tackle, or use the FB as a lead blocker. He also has the option to drop back and pass, but that's outside the scope of this exercise. Lastly, there is an option where the X TE loops around and receives a handoff from the UB and runs it off tackle. Yes, this series is awesome.

Unfortunately I couldn't find tape of Michigan running it, even though I know they did. But here's some little kids going to work with many of the buck plays (the first two plays, after that it's the spin series).

The hot play in today's spread offenses is the inverted veer. 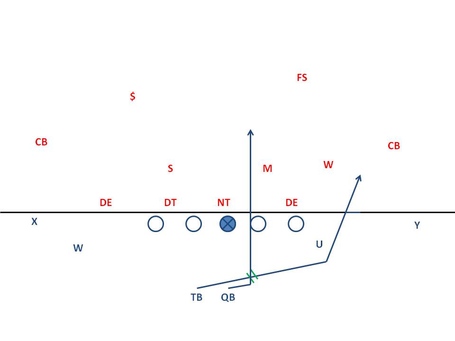 Michigan does something that OSU does today, and that is utilize the wing of a WR to provide the outside run threat. 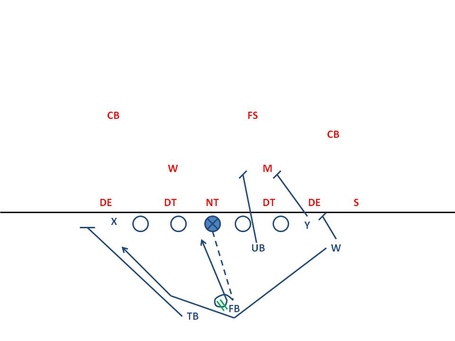 Here's a look without the wing:

You know what the option looks like, so here's videos of each team running a basic speed option. If not, look at the triple option play for OSU, it's similar, and look at Off Tackle - Option above for the Single Wing.

For OSU, they'll run this with both their RB and QB. Here you see OSU run essentially the same exact play as Michigan did back in their single wing days.

As they say, in football, everything is cyclical. Many of the spread option concepts are nothing particularly new. The idea from the single wing of being able to attack every part of the field with the run game, much of it from the same exact look and techniques, is also a staple of the spread offense. But what is new and what makes it so effective are the wrinkles that have been implemented within the system to make it even harder for the defense. Add on top of that a real passing concept, and you have something that can be considered one of the best offenses from one of the best offensive minds in the game. But if Meyer stops tweaking his scheme and adding new wrinkles, just like the single wing from the post WWII era, his offense will also go stale. While many ideas Meyer has used are borrowed, they have also been modernized to fit his system today, and as you continue to watch his offense, expect to continue to watch it evolve and change, at least until he decides to retire again.

Also, I recommend watching 10 minutes of awesome. If you watch closely, you'll see even more similarities between the two offenses.