Michigan's third year with Greg Mattison running the defense is going to be an important test, as Michigan lost the last of the strong defensive holdovers from the Rodriguez years, and the unit will now depend on a young, but deep roster.

Share All sharing options for: 2013 Season Preview: The Defensive Outlook

Previously on: The Secondary, The Linebackers, The Defensive Line) 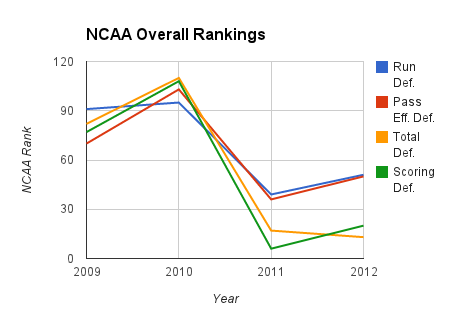 In just a couple years, Greg Mattison has walked Michigan back from the edge.

The 2009 defense was bad and the 2010 version was even worse, ranking dead last in the conference in both total and scoring defense. That Michigan was still 7-6 on the season was a testament to just how good the offense could be and how quickly it could score, but overall it was a complete breakdown by the Wolverine defense.

The reasons Michigan was able to make such drastic improvements were three-fold. First, Michigan's defense improved by leaps and bounds when it came to stopping the run. 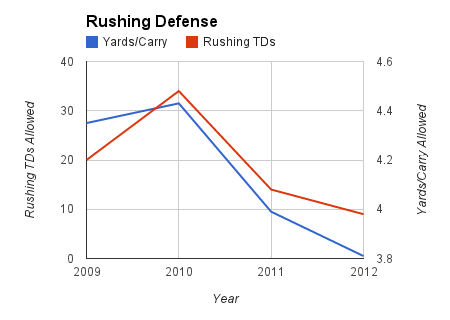 The drop in yards/carry is stunning, with Michigan improving by nearly a half-yard per carry between 2010 and 2011. The Wolverines also had a much easier time stopping opposing teams from scoring on run plays, and stopping opposing teams on third down. The Wolverines' third-down defense has hovered just around 36% of conversions allowed the last two years, while 2010 was over 43%. However, one of the biggest areas In which Michigan has improved has been in stopping long plays (CFBStats only has data for the last three years). 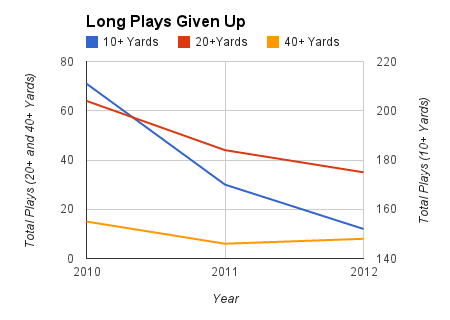 Together, these stats paint a vivid picture of the same point I have been trying to make about this defense over the last two months in just about every defensive leaning preview piece I've written. Michigan's defense under Greg Mattison hasn't always been the most talented, but it has been incredibly disciplined, and Michigan has gotten the most out of the players it has had. The 2011 transformation was no miracle. It was a return to the basics. Stop the run, get teams off the field on third-down, and don't allow big plays. Michigan improved drastically in all three areas, and the results led to a very good defense capable of a lot.

What does it all mean for this year?

In terms of the run defense, Michigan looks to once again be well set. The linebackers are set to be Michigan's strongest group of staters, with or without Jake Ryan. With Cam Gordon playing better and better in fall camp, Michigan should have three rangy, capable linebackers, none of which are new to significant playing time. With Brennen Beyer and Joe Bolden also playing sizable roles, Michigan has the ability to be very good between the tackles.

A large part of that will be thanks to a defensive line that is now deeper than ever before under Hoke. Quinton Washington should continue to excel at keeping the linebackers clean, and despite the coaches continued insistence on playing Jibreel Black (and Tom Strobel!) at the 3-tech, this line has enough size to hold up against blocks and not get pushed around.

It wouldn't be out of the question to see Michigan's success against opposing rush offenses continue and even improve on a per carry basis. This will help Michigan keep its third-down conversion numbers in check as well, because one thing the Wolverines have shown a penchant for under Mattison is killer third-and-short defense.

Therefore, we turn to the one potentially scary area in which Michigan may not be able to keep pace with the past two years: bending without breaking.

That has been the most noticeable difference between the last two versions of Michigan's defense and the 2010 version that was bombed more thoroughly than Dresden in WWII. The last two years have lacked for those "hide your eyes" moments. Mostly...

I had already planned on writing this column, but reading today's UFR post at MGoBlog from the South Carolina game put the ease I am feeling into context. As Brian expains, South Carolina either did "nothing or everything". Large pull quote awaits:

In the fourth quarter the Gamecocks went on a couple of actual drive-type substances; before that they did nothing save for four huge plays (and an Ace Sanders PR TD).. So let's take a look at those five plays and the sixth long one.

- Taylor smoked over the top one on one by Damiere Byrd
- M gets caught in a blitz and has three deep against four verts because there is no FS.
- Campbell blows a midline zone read and Kovacs misses his first tackle in like three years.
- Another all-verts finds a hole in the zone behind Joe Bolden.
- Thomas Gordon beaten over the top by Ace Sanders.
- FS is playing man on a TE rather than covering a post in the middle of the field.

Other than the once-in-a-generation botched fill by Kovacs (against a moderately mobile QB, of all people) those are all the secondary getting crushed by Spurrier's verts addiction and a lack of athleticism.

I quoted that at length because it lays out the bare-bones problem that confronts Michigan's defense in the age of "Jordan Kovacs, NFL Player".

Not all of the credit for Michigan's strong defense against long plays the past two years goes to Kovacs, but he was an integral part of it all because he was so smart and so able to hold everything together. Just like Greg Mattison has gotten the most mileage in the front seven out of some rather ill fitting pieces the last two years, he has done just the same in the secondary. This was a unit that started J.T. Floyd for two years, and didn't fall apart when Blake Countess, its best corner, went down with an injury a year ago. Michigan's secondary has been playing a game of survival for two years, and winning more often than not.

Now, Kovacs is gone and Michigan has to live without him. This isn't all bad. Part of the reason that Kovacs had to hold things together was that the Michigan secondary lacked athleticism, experience, and depth. This year Countess and Raymon Taylor return as starters, Courtney Avery has been around for years, Michigan gets a handful of athletic freshmen (Dymonte Thomas, Jourdan Lewis, Ross Douglass) it can role out in certain situations that are hand picked to be lower risk — unlike when freshmen had to play because, hey, fresh meat. Not to mention Thomas Gordon is still at safety, and had a big hand in Michigan's defensive success the last two years.

Michigan's back seven will be more athletic, more experienced, and deeper across the board this fall. It could also look worse. The worry doesn't just emanate from the current battle at FS between a supposedly disappointing Jarrod Wilson and played-everywhere-else Courtney Avery. It is more general than that. Michigan no longer has its security blanket.

If those lines on the last graph are going to keep going down or holding steady, it is going to take quite an impressive team effort in the defensive backfield to handle business, wrap up tackles, and don't fall asleep. The talent is there, but we are still waiting for the production to follow.

On the whole, Michigan's defense should produce at or around the same level that it has the last two years when it was solidly a top-25 unit, but not quite an elite one.

Michigan will have all the pieces in place to eventually build the type of defense that can be among the best in the nation, but there is still a lot of youth all over the defensive roster, and the growing pains will insure that mistakes will be made. The defense will be just as good and effective overall, but it may not always look like it.

The keys for this year's defense are simple, and the more Michigan can check off as complete, the closer the Wolverines get to the "great" threshold that has been out of reach the last two years.

- Jarrod Wilson has to have the light come on: He is the closest thing Michigan has to a potentially good safety. He has a year of experience, all the size and speed necessary, and a full off season of working as the starter. If his struggles this fall are put to rest early, Michigan's secondary closes up.

- James Ross makes 'The Leap': I think Ross makes a leap, but he is probably still a year away from putting together a strong case for first-team all-Big Ten. Michigan will have an opportunity for a linebacker to step up in Jake Ryan's absence, and Ross has a better chance than anyone to break out in that role.

- If Frank Clark is Frank Clark: Michigan needs to develop a four-man pass rush to take pressure off the secondary and give Greg Mattison more options on defense. Clark is the off season front runner in this competition, and if he lives up to the practice hype Michigan will finally have someone that can get consistent pressure.

- Seniors make it count: Guys like Jibreel Black, Cam Gordon, and Thomas Gordon have been around the program for a while, and all three will have bigger roles this fall than they have before. Michigan needs its senior class to lead and take pressure off the younger guys.

- Michigan's rush defense improves to 3.7 yards/carry while giving up 12 touchdowns.

- Michigan's pass defense is the reason Michigan gives up double-digit 40+ yard plays for the first time since 2010.

- Overall, both total yardage and scoring defense rankings stay firmly in the top-25, and Michigan sits around third or fourth in the conference in the various defensive categories.

- Jarrod Wilson is solidified in the starting lineup by November.